The Relationship Between Fractal Geometry & Energy 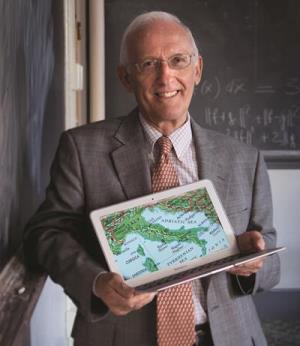 Umberto Mosco Investigates the Relationship Between Fractal Geometry and Energy

Umberto Mosco says that the relationships between shape and sound and shape and color have always fascinated him. In fact, they have guided his life’s work. Mosco, a world-renowned expert in mathematical analysis, uses these simple terms to illustrate the complex mathematics that describe the relationship between an object’s geometry and energy. Mosco’s research and teaching interests include convex analysis, control theory, homogenization, partial differential equations (PDEs), and variational problems. By examining the relationships between calculus, discrete mathematics, and statistics, he has cleared new paths in the calculus of variations, but it is the relationship between fractal geometry and energy that motivates him.

His most recent publications focus on fractal and pre-fractal singular homogenization. He uses fractals to investigate the theory of highly conductive thin layers. Homogenization problems that deal with highly conductive thin layers have been studied at least since the 1970s, write Mosco and his collaborators, but transmission problems dealing with infinitely conductive fractal layers have only recently been investigated. Mosco uses a biological metaphor to explain the fractal problems he is researching.

“Every physical body has its own spectrum, its sort of internal DNA,” says Mosco. “And sometimes the geometry gets very much perturbed, deformed. But this internal DNA, this spectrum, is always keeping its nature. And how these two things are connected is a very challenging thing. It explains the deep nature of physical bodies. Everything that I’ve done has always been trying to put together, using geometry, and analysis in particular, this description of intrinsic vibrations, and how coupled bodies can interfere with each other in the sense that they start to vibrate together.”

Researchers have recently discovered, says Mosco, "that the spectrum survives very strong geometric perturbations which develop what are called fractal features. Fractal features means that the body has distinct dimensions for the geometry and the spectrum and at least one of them is a fractional number. This is quite a different behavior than that of a usual body. Traditionally, a uniform physical body has a single dimension for both, and it is an integer number. The fractal splitting of dimension was discovered when it was observed that certain, very crazy, mathematical objects, also had a ‘voice’, also had a ‘sound’. They were not only crazy geometrical objects; these objects were able to speak. The physicists first, then the mathematicians later, started to understand what is the sound that is attached, what is the spectrum that is related to these very strange bodies And to their surprise, or out of their deeper intuition, they discovered the dimensional splitting. This theory was developed some twenty years ago. In the last ten years a lot of work has been done to study how these strange fractal bodies interfere, interact with our usual membranes and domains. This is very challenging because it’s going in new and perhaps alternative directions than the classical theory of partial differential equations and boundary value problems has gone so far. "

Mosco uses another example from nature to further explain what he means. “Underlying the relationship between geometry and energy, in the classical situations, was the idea that many phenomena in nature are well described by say a ball or soap bubble. Many phenomena tend to surround the largest possible volume with the smallest possible surface because you’re trying to minimize some surface tension and this brings you ideally to the formation of a sphere, a ball.” But there is an opposite phenomenon in nature, says Mosco, that mathematics, influenced by classical Greek aesthetics, historically ignored.

This other phenomenon occurs when a small volume interfaces with a surrounding space over a large surface area. It is exemplified, says Mosco, by the fractal nature of tree leaves and roots, as well as the network of blood vessels and capillaries in our bodies. If the entire foliage of a tree was formed into a single sphere, notes Mosco, the tree would die immediately because the surface of the sphere would not be maximally exposed to the light of the sun. Nature has designed trees to have multiple leaves, each individually striving to expose the maximum amount of its surface to the sun’s rays. These kinds of problems from the natural world were historically observed in science, but they were not, says Mosco, treated with mathematical tools. “Developing these tools, says Mosco, “is very difficult, very hard, but very challenging. In the last years, there have been very big contributions, and I’m happy to have been involved in this new field, which I consider promising to younger students.”

These new mathematical tools will allow researchers to both theoretically interpret nature and to construct new, practical applications. “This kind of work that we’re doing,” says Mosco, “goes in the direction of confining large surfaces into relatively small spaces.” For example, increasing the surface area inside a catalytic converter while maintaining its standard size/volume will increase the converter’s capacity to remove impurities. We can also, says Mosco, use this same miniaturizing principle to improve hydrogen storage cells because hydrogen is stored on the surface of certain alloys. Storing more and more information into smaller and smaller spaces, notes Mosco, is a hallmark of modern science and technology. “We didn’t have this constraint before,” he says. “So probably this is why this trend in mathematics was not developed so far. But this miniaturization is inevitably bringing us to do the mathematics of large surfaces in small volumes.” This trend is particularly illustrated, says Mosco, by the burgeoning field of nano technology.

The Mosco-convergence, the brainchild of Mosco’s early days, is a concept in non-linear and set-valued mathematical analysis. It has become canonical in the field of variational calculus. Mosco says he only recently realized why the concept is so applicable. It is based on a very simple principle--the Pythagorean theorem. “The relation between the two sides of a right triangle,” says Mosco, “is a mysterious thing that has to do with what in mathematics is called duality; it has to do with a Hilbert space and the dual of this Hilbert space. Duality is one of the most powerful mechanisms in mathematics. It is what goes from the classical solutions to the so-called weak solutions of differential equations. The convergence we are talking about says if you move one side, then necessarily you have to move the other side because the two are related to each other. This was so unusual in describing the convergence of processes because it was considering dual problems at the same time. And this convergence happens to do exactly that. It’s very stable. And it is very stable because essentially it is the convergence of energy; it’s the convergence of the spectrum. So right now it is the good tool to study these spectrum perturbations.”

Mosco, half-jokingly, credits the youthful discovery of his famous convergence to not knowing enough math. Not knowing enough mathematics can be an advantage, he says, because it forces you to be creative. He believes that a creative imagination and independence of mind are essential qualities of being a mathematician. He was allowed to cultivate these traits as a youth growing up in Calabria, a crossroads of classical thought and learning in the ancient world. As a teenager, he was primarily interested in physics and art. He is still quite passionate about the latter, being moved as equally, if not more so, by the paintings of Jackson Pollock as he is by the sculptures of Michelangelo. He might have become an artist had he not, at seventeen, been chosen by a committee of elite Italian mathematicians to pursue his doctorate in mathematical sciences. “At that time,” he says, “I was very much fond of art—painting, sculptures….Essentially, I had this imaginative world that I wanted to express and I never made a very sharp difference between creating art and creating science, or mathematics. So probably that was simply my nature to do this kind of thing. I could have been, perhaps, a painter and expressed myself the same way.”

One of the intrinsic rewards of being a mathematician, says Mosco, is the opportunity to express himself imaginatively through his research. The most beautiful aspect of his work, however, is engaging with young scholars. It satisfies him to know that they find his wealth of experience useful, and their fresh ideas and methods inspire and motivate him to reach new heights. His teaching philosophy is as elegant as his concept of convergence. Try to make things simple, he says. “If you are not able to make the complex simple, then you have not really understood what you are teaching.”

Mosco joined the WPI Department of Mathematical Sciences in 2005, as the Harold J. Gay Professor in Mathematics. He earned doctorates in mathematics (1959) and physics (1961) from the University of Rome, where he spent nearly thirty years as a full professor. “The specialty of our work,” says Mosco, speaking of mathematicians, “is intrinsically international. There are no boundaries at all; the language is the same.” The great European mathematicians, he notes, have always been peripatetic, moving from one academy to the next like freelance knights seeking a patron. WPI was particularly attractive to Mosco because it is small and private. Its focus on engineering was also alluring. Mosco comes from a family of engineers. He finds engineers stimulating because they like to see immediate practical returns on their work. WPI’s dedication to engineering is one of the attractions that made leaving the Seven Hills of Rome for the Seven Hills of Worcester appealing for Mosco.