In 1865, a severe-looking man then in his 70s visited his nephew in Worcester to discuss a confidential matter. Having amassed a small fortune making tinware in nearby Templeton, he had decided to use most of it to establish a new school to provide a scientific education to the youth of Worcester County, particularly those destined for careers as leaders in the emerging American Industrial Revolution. His anonymous gift of $100,000 and his simple notion for the school would become the basis for a new college unlike any that had come before it. 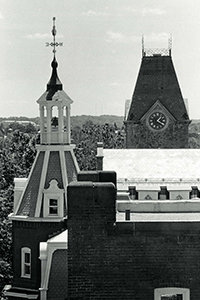 Before John Boynton's vision could be realized, though, it had to be reconciled with the dream of a prominent Worcester industrialist. Ichabod Washburn, founder of a large and highly successful wire manufacturing enterprise, had long dreamed of founding a school that would replace the age-old apprenticeship system with a formal education program for tradesmen. Washburn had put his dream aside in the face of an economic recession, but now he saw the idea of a little-known tinware maker threatening to take its place.

In time, Washburn was convinced that his vision could be merged with that of Boynton. He donated a working shop -- essentially a state-of-the-art manufacturing facility -- to the Institute. It rose side by side with a classroom building built with contributions from the citizens of Worcester. When the Worcester County Free Institute of Industrial Science opened in 1868, students attended classes in Boynton Hall and then went next door to put the theory into practice making products for sale in the Washburn Shops. The towers of these two buildings came to symbolize the balance of theory and practice that has been at the heart of WPI's educational philosophy ever since.

Twenty-five years ago, the Institute captured the essence of this philosophy in a bold new approach to undergraduate technological education. Called the WPI Plan, this program combines traditional course and laboratory instruction with three mandatory projects, including a professional-level design or research project in a student's major fields. The Plan today is being viewed as a model for the future of technological education nationwide. It may well be that the two towers on Boynton Hill will soon become a familiar symbol of innovation to educators and students across the country.

They tell the whole story, these two towers on Tech Hill. For a hundred years they have stretched toward the sky in their telling, their own eloquent picture of the ideals for which they stand. In the old days their bid for attention was known as theory versus practice. Now there are terms of engineering and science. But whatever the words, the towers tell of the proverbial conflict between hand and mind and of the long, aching travail of the heart to reconcile the two.