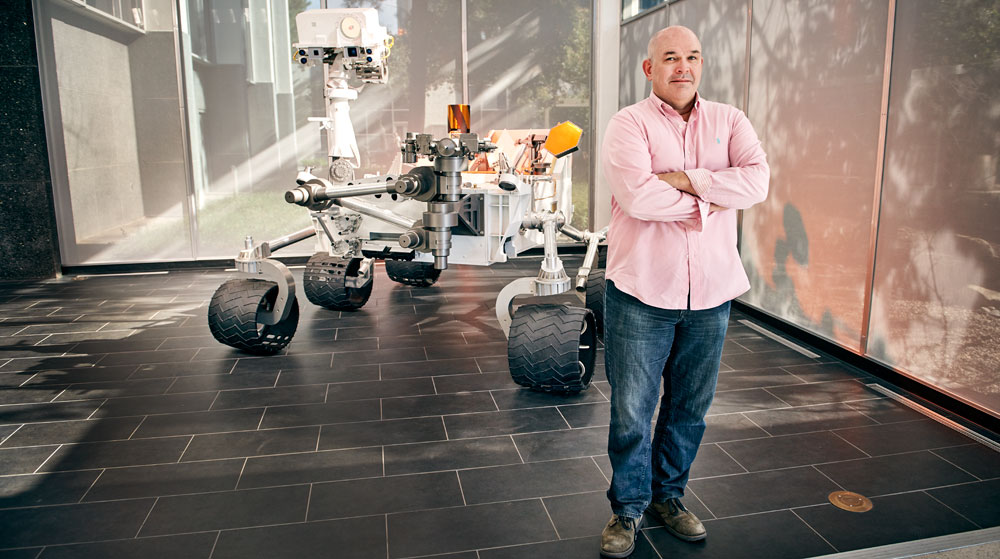 All Systems Go For NASA Spaceflights 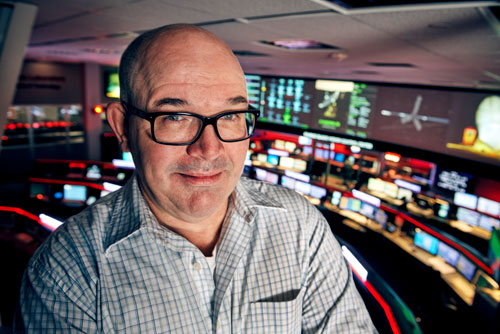 On July 20, 1969, having broken free of Earth’s orbit through the power of the Saturn V rocket and traveled across space for three days, astronauts Neil Armstrong and Buzz Aldrin landed their 16-ton lunar module Eagle in the dust of the Sea of Tranquility, shimmied out through the vehicle’s hatch, and became the first humans to walk on the Moon.

Back on Earth, 238,900 miles away, some 600 million people watched spellbound as the moonwalk was broadcast live on television. One was a boy named Scott Mathews, who sat on the floor in front of the black-and-white set in his parents’ bedroom in Teaneck, N.J. It was just before 11 p.m. on the East Coast, but since school was out for the summer he had permission to stay up late for the historic event. Four days later, his family tuned in again to see the astronauts’ stainless steel-clad command module Columbia splash down safely in the Pacific Ocean. By that point, the boy—who’d turned 10 that day—knew what he would do with his life. But unlike many children his age, he didn’t want to follow in the footsteps of the men who had walked on the Moon. He wanted to be one of the engineers who sent them there.

“As a young child, watching the Mercury and Gemini missions, all the way through to Apollo, I knew I wanted to be involved,” Mathews says. “I would see the astronauts walking across the gangplank into the spacecraft, but I was never as interested in being an astronaut as I was in being one of those guys working on the space capsule and designing the launch tower. I was fascinated with building the stuff.”

Watching the near-flawless ballet of rockets, spacecraft, and other specialized equipment that had enabled humankind’s greatest feat, Mathews dreamed of being a choreographer. And nearly half a century later, that’s, in effect, what he is.

In the early stages of a years-long mission, NASA engineers come up with ambitious designs for the spacecraft, rockets, and rovers that extend humankind’s reach to space, to Mars, and beyond. But before the countdown, someone has to put everything together—a process known as integration. Because it involves handling sensitive, expensive, and sometimes very large components—all of which were specifically designed to function in space, not on Earth—integration requires the expertise of a highly trained team of engineers. That’s where Mathews comes in.

Now a 57-year-old whose enthusiasm about space travel hasn’t wavered since he watched that first moon landing, Mathews is group supervisor of mechanical integration engineering in the Spacecraft Mechanical Engineering Section at NASA’s Jet Propulsion Laboratory in Pasadena. Over the past 10 years, his team has worked on marquee projects like the Mars rover Curiosity, developing the procedures to assemble the myriad components of each spaceflight.

“You’d be surprised how easy it is in the design phase of a flight system structure to overlook how you’re going to actually put it together,” Mathews says. “You don’t want to come in late in a project and then be scratching your head, figuring out, well, how are we going to lift this thing off the table?”

Mathews’s role begins early, when he and his 22 team members create a graphic storyboard that may be hundreds of pages long. Just as a movie crew plots out each scene before shooting begins, JPL engineers map out the mechanical flow of parts coming together, deciding in advance how to safely handle, support, and turn them.

Storyboarding begins with a computer model of the completed flight system, which the engineers then deconstruct and reassemble in simulation. Next, they decide where the integration will take place; each step must be assigned to one of the laboratories or oversize clean rooms, called bays, throughout JPL’s nearly 200 acres of facilities. Will an operation require a low bay with work benches to assemble small components, or a high bay (an enormous, gleaming white room with an overhead crane)? Will the assembly require scaffolding for people to stand on? Will they need to squeeze inside tight quarters to attach components?

“We have to pay attention to things like what the crane height is going to be, and the sizes of the doors we have to get through, how we’re going to be able to move flight system components and other equipment in and out of these rooms,” Mathews says. “We also look at how we’re going to move the components around the lab, and we make sure we’re providing structures and attachment points to various pieces of flight hardware to allow us to handle it and lift it up.”

Painstaking tests and rehearsals follow, often with replicas of the flight hardware. “We make sure that every screw we put in is torqued down properly and all the material we use is the strength we expected, and any welds we use to fabricate subassemblies are done properly,” Mathews says. “That usually gives us a pretty high degree of confidence that we’re not going to damage the flight hardware in any way.”

Each step of the integration is a sort of puzzle, and each brings its own challenges. In 2015, for example, Mathews and his team had to figure out how to transport the fully assembled Earth-orbiting climate science satellite SMAP (Soil Moisture Active Passive) from JPL to a launch site at Vandenberg Air Force Base, 170 miles up the coast. It looked like JPL engineers would have to create a specialized, expensive vehicle to carry SMAP on the highway—until Mathews hit upon an elegant solution.

“SMAP is about the size of a large refrigerator, but it has a big antenna assembly that makes it very tall and unwieldly,” says Peter Waydo, one of Mathews’s supervisors at JPL. “Scott created a device we could mount our several-hundred-million-dollar spacecraft to that would safely turn it on its side, allowing it to be carefully inserted into the back of a tractor-trailer and anonymously transported down the freeway in the middle of the night, among the regular trucks on the road. It was completely safe and incredibly well protected, and Scott’s efficient, cost-effective approach will be the model for future spacecraft transportation. You never know what’s in that unassuming truck next to you on the freeway!” 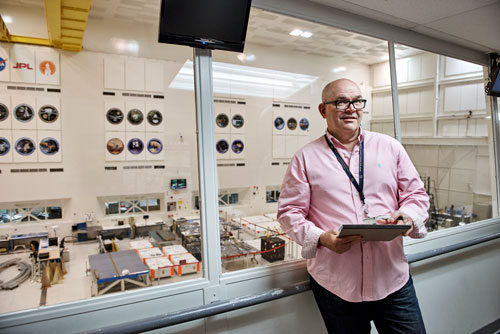 Long before Mathews was loading priceless spacecraft into tractor-trailers, he was a junior high schooler pursuing his goal to one day work for NASA by taking Saturday classes in math, rocketry, astronomy, and mechanical engineering as part of a program for gifted young people. Such enrichment programs were unusual in the 1970s, but Mathews’s parents, although they had no background in engineering themselves, did what they could to support their son’s dreams. “From their encouragement,” he says, “I knew that the only way I was going to get to where I wanted was by learning a lot of complicated subjects and doing well in school.”

That extended to enrolling at WPI, which attracted Mathews with its practical, application-oriented curriculum.

“One of my favorite classes was actually one of the most difficult ones,” he remembers. “It was called ‘continuum mechanics’ [a branch of mechanics that involves modeling materials as a whole rather than as components], and I’ve used it to solve some pretty difficult problems over the years.”

Shortly after graduating with a BS in mechanical engineering, he was recruited into his first space-related job, at NASA contractor Rockwell International. Stints at other aerospace companies followed, and over the years he worked as a contractor on numerous JPL missions. At Martin Marietta, a precursor to Lockheed Martin, he helped build the Magellan spacecraft, an unmanned probe launched in 1989 to map the surface of Venus. With Lockheed Martin, he worked on the propulsion system for Cassini, which launched in 1997 and is currently in its final year of studying Saturn; the Mars Polar

Finally, in 2006, after a stint at the University of Arizona’s Steward Observatory—where he worked on the delicate mirrors and sensitive components of large ground telescopes—Mathews realized a lifelong dream: a job at JPL, itself.

“Scott was my first hire when I became a supervisor,” says Sergio Valdez, now a deputy section manager at JPL who at the time held the job title Mathews holds today. “I was looking for an all-around engineer who had done everything, and Scott’s been a real asset. He’s good at focusing on not just what’s in front of him, but looking at the big picture and how it all comes together.”

It’s a crucial way of seeing the world—not to mention the solar system—and it will come in handy as his team takes on JPL’s next big project, Mars 2020. An evolution of the celebrated Curiosity, which landed on Mars in 2012, the Mars 2020 rover is about the size of a sedan, and the vehicle and its flight system will require hundreds of steps to assemble. When it launches in three years, the science the rover performs will help pave the way for NASA’s long-term goal of sending astronauts to Mars.

Meanwhile, JPL is working on plenty of other projects, including an unmanned mission to Jupiter’s moon Europa, which may hold liquid water; a potential mission to an asteroid; and several instrument payloads for the International Space Station, which will observe the Earth’s oceans and atmosphere with an eye toward finding solutions for climate change.

These are exciting times at JPL, Mathews says, although the work can be stressful at times. “There are certain operations where you just can’t help but hold your breath a little bit,” he admits. It’s also everything he hoped it would be, as a young boy watching history happen live on TV.

“I’ve had a 34-year career now, and I’ve worked on so many different spacecraft,” Mathews says. “Every day, I consider myself lucky.”