For years, Indigenous communities all over the west advocated that the United States permanently designate a place on the calendar to honor the contributions, achievements, sacrifices, cultural and historical legacy of the original inhabitants of what is now the United States and their descendants: the American Indian and Alaska Native people.

The journey for a national honoring of Native Americans began in the early 20th Century, pioneered by a number of important historical figures. Dr. Arthur Caswell Parker, Reverend Red Fox (James Red Fox Skiukusha), Reverend Sherman Coolidge and a number of indigenous communities and allies across the nation, repeatedly petitioned for a national spotlight or commemoration that honored the storied legacy of indigenous communities within the United States. The first time “American Indian Day” was formally designated in the United States is commonly considered to be 1916, when Charles Seymour Whitman, then Governor of New York, commemorated the second Saturday in May for the state’s observance – a number of states followed suite in commemorating the day.

As early as 1970, Congress and subsequent presidents enacted legislation, and issued annual proclamations commemorating a day, a week or a month to celebrate and observe the nation’s American Indian and Alaska Native heritage. “In 1990 then President George H. W. Bush approved a joint resolution designating November 1990 ‘National American Indian Heritage Month.’ Similar proclamations, under variants on the name (including “Native American Heritage Month” and “National American Indian and Alaska Native Heritage Month”) have been issued each year since 1994.” In 2009, Congress passed, and the President signed, legislation that established the Friday immediately following Thanksgiving Day of each year as “Native American Heritage Day.” While these numerous proclamations and commemorations did not necessarily set a national tone for the observance, they did allow for federal departments, agencies, and state communities to create and facilitate their own ways of celebrating and honoring the nation’s Native American heritage. “Every President since 1995 has issued annual proclamations designating the month of November as the time to celebrate the culture, accomplishments, and contributions of people who were the first inhabitants of the United States.” Last year, a proclamation was issued officially designating November 2020 as National Native American Heritage Month. Currently, within a number of indigenous and non-indigenous communities, November is more accurately recognized as Indigenous Peoples Heritage month. 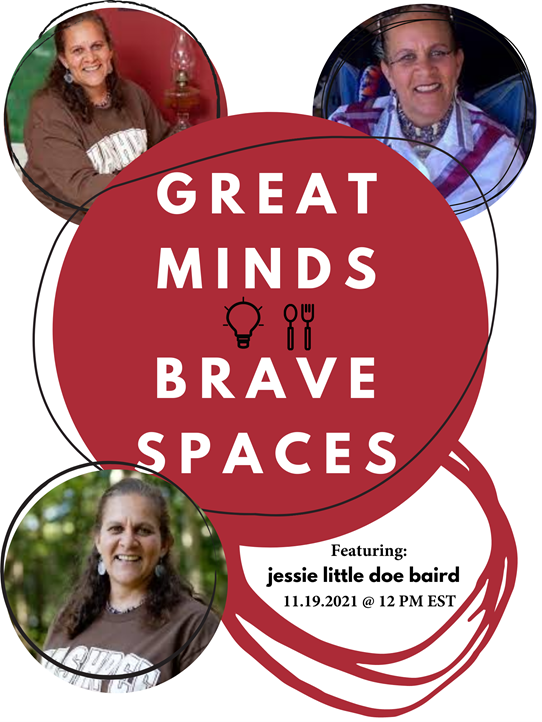 jessie little doe baird is a citizen of the Mashpee Wampanoag Tribe and Linguistic Director for the Wôpanâak Language Reclamation Project. She is the mother of five and was born and lives in Mashpee and Aquinnah. jessie is the Co-founder and Director of the Wôpanâak Language Reclamation Project that began in 1993. This is a Cooperative endeavor between Mashpee, Aquinnah, Herring Pond and Assonet communities. The aim of the project is to reclaim Wôpanâôt8âôk as a spoken language. There were no speakers of the language for six generations.

Transgender Awareness week (also known as Trans Awareness Week) aims to center, celebrate, memorialize and honor the transgender and gender-nonconforming communities. This one-week celebration leads up to Transgender Day of Remembrance (TDOR) on November 20th.  TDOR was inspired by Rita Hester, a black trans woman who was brutally murdered in her Boston apartment in 1998 and whose death inspired a movement. TDOR was established almost one year after Hester’s death, by trans activist Gwendolyn Ann Smith on November 20, 1999 marking this year as it’s 23rd anniversary. Her legacy has been cemented, however, the case of her murder was never solved and her name has largely been overlooked by mainstream media and literature. Rita Hester’s memory inspired a day to memorialize those who have been murdered as a result of anti-trans violence and transphobia; and a day to draw attention to the continued violence on transgender communities.

Throughout Indigenous Peoples Heritage Month, OMA and the DEI Team we will be collecting stories, traditions, photos, and narratives to honor and celebrate the many identities and cultures of the WPI community. Your submissions will be displayed on campus and online throughout the month.

The ‘WIN Sponsored Childcare Feasibility Study’ is a project funded by the Women’s Impact Network (WIN). The goal of the project is to collect, analyze, and report data related to childcare needs of the WPI community, as well as childcare support offered by other universities. We are looking for community members (faculty, staff and students) with or without children to complete this 10-15 minute anonymous survey, and share with us your needs and wishes related to childcare support from WPI.

This survey does not represent WPI plans for childcare support, however the data collected from
the community will be included  in the project’s report and recommendations to WPI administration.
Email Mia Dubosarsky with feedback and/or request an interview to provide feedback.

Diversity, Equity, and Inclusion Library Guide
The Gordon Library website contains Library Guides where the WPI community can discover a number of DEI tools to support their academic pursuits.

The Nation: If the Coronavirus Is a Wildfire, Colonialism Has Fueled the Blaze
Taté Walker (Mniconjou Lakota) is a Two Spirit storyteller and her work centers the voices and experiences of indigenous communities.

Pronouns Guide
Helpful information, around using pronouns and the important role they play, especially among our transgender, gender non-conforming, non-binary and genderqueer community.

Interested in collaborating/facilitating on an upcoming Heritage Month education/professional development? Let us know!
Please be sure to sign up for our DEI Team Listserv to receive future Heritage Month Newsletters!