When Beth Phalen arrived at WPI as a freshman computer science major in the fall of 1981, “data protection” meant a strong rubber band.

“My first semester, we still used punch cards,” she explains, “We had to go down to WACCC [Worcester Area College Computation Center in Gordon Library]—and I remember late at night or early in the morning leaving with my punch cards, with a rubber band wrapped around them to keep them in the right order. You’d hand that stack in and they would run it through the system. You would get the output on paper, and you’d review it, and then you would have to update the cards.”

Phalen laughs as she thinks about how technology has changed. She and her classmates once worried about accidentally disarranging their punch cards before their programs could be run on the IBM mainframe. Today, she is president and general manager of the data protection division at Dell EMC, the multinational information technology corporation headquartered in Hopkinton, Mass. She and her customers around the globe now have far more complex concerns.

“The way I talk about it is, it’s our responsibility to make sure that customers—corporations all the way down to the small- to medium sized businesses—can access their data no matter what happens,” she says. “And their needs are really changing. The amount of data is growing exponentially. Meanwhile, businesses are becoming more and more dependent on that data—its importance is also increasing exponentially.”

She took on this high-stakes leadership position in 2016 and now oversees a global team of 1,700, from software engineers to salespeople, who create and market software and hardware that help companies archive, back up, and recover their data. This career trajectory has brought her a long way from shuffling punch cards, but her current role makes sense to friends she bonded with during late nights at WACCC. 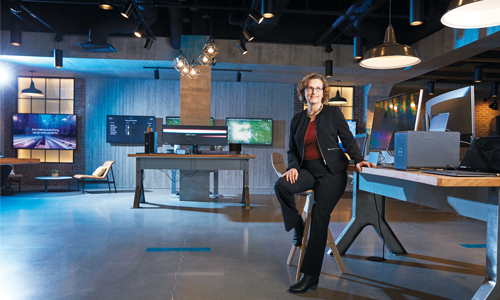 “My first semester, we still used punch cards,” she explains … “I remember late at night or early in the morning leaving with my punch cards, with a rubber band wrapped around them to keep them in the right order.”

“Beth is modest about it, but when you look at the leadership of most big companies, you don’t see a lot of women engineers, so that is a big deal,” says Mary Foley Walsh ’85, a fellow computer science major. “Still, it doesn’t surprise me. She is a really good listener, she’s optimistic— I look at her at Dell EMC and I think, ‘wouldn’t anyone like to work for someone like that?’”

Phalen’s days at Dell EMC begin early, so she can teleconference with team members in India or Israel. Meetings and video calls with engineers may follow, as she checks in on different projects and works to understand the division’s current challenges.

“We’re doing a massive amount of transformation right now,” she says, explaining that Dell EMC’s data protection division is currently changing its approach to software development, moving from a traditional “waterfall” style—in which development begins with a planning stage and continues step-bystep to a final stabilization phase— to the cutting-edge Scrum and Agile method, in which software engineers work together in short “sprints” to complete small batches of functioning code, which can be shipped to customers more quickly. “Scrum always keeps the customer in mind,” she says.

Accomplishing such a radical shift means encouraging her team to embrace a new mindset, a change that sometimes can prove difficult for employees of large, established corporations. “Part of my role is making sure I’m doing everything I can to knock down impediments,” she says, “while also challenging my team and encouraging them to think about things in the right way to make progress.”

Phalen is also the face of the data protection division, which means communicating with customers around the world, many of whom are undergoing their own transformations. One multinational software company, for example, was seeing its data double in volume every year. It made sense to move from traditional on-premises data storage to a more modern cloud infrastructure, but the company needed Dell EMC to help with the shift, which required also modernizing how it protected that data. Smaller businesses, meanwhile, are eliminating dedicated data protection positions, dividing the responsibility among multiple people—who now need access to more user-friendly tools. 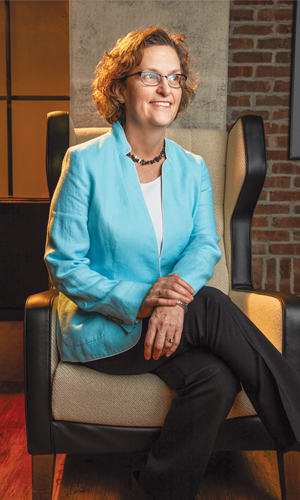 “The industry was new then,” says Phalen. “It felt like it was new for everybody. In some ways it was easier, because we didn’t have the stereotype of the male tech worker yet; we didn’t have that burden.”

“There’s a big focus on simplifying everything that we deliver,” she says. “All customers now expect their interfaces to be easy to use, and workflow to be automated.”

Her role requires a deep understanding of computer science and software engineering, as well as a facility with people and an intuitive sense of what customers and employees require to be successful. As it turns out, she first developed both sets of skills during her years at WPI.

She spent her early childhood in Holliston, Mass., where her father worked for a company that sold computers to WPI. He brought his daughter along when he visited campus—visits that stuck with her even after the family moved to New Jersey when she was in sixth grade. “That put WPI on my radar screen,” she says. “And then, I really liked the WPI Plan. I liked Massachusetts. I liked the size of the school. I can remember being in New Jersey, trying to decide between WPI and another college, and looking through the brochure over and over again, and I was just drawn to WPI.”

A self-described “math kid” in high school, Phalen knew from the start that she wanted to major in computer science. “It was that or accounting, and computer science sounded a lot more interesting.” She was aware that her gender made her stand out, both at WACCC and on campus more generally. At the time, women represented less than a third of the student body, and the proportion in computer science was half that. And although she never felt that male students or classmates treated her differently, she formed tight bonds with other women. “I think that was sort of a natural outcome of being so much in the minority,” she says. “But it really didn’t faze us. And I think because the industry was new then, it felt like it was new for everybody. In some ways it was easier, because we didn’t have the stereotype of the male tech worker yet; we didn’t have that burden.”

She recalls “comradery and community” when she thinks back to her days at WPI, which, she says, “turned out to be a really good fit for me. The project work was interesting and engaging, and it allowed me to just enjoy what I was doing, to think of it as not just something I needed to do to pass a class, but something I was learning for the longer term.”

She picked up programming languages like C, Lisp, and Pascal, which—like punch cards—quickly became obsolete, thanks to the swift pace of technological innovation. But it wouldn’t be these concrete skills that would serve her best once she entered the working world. “With software engineering, a lot of the logic and the approach— the ability to debug and diagnose problems, to think about things from the design level—applies no matter what language you’re using,” she explains. “And the experience of working in a team to complete projects is absolutely still relevant. That’s just foundational, and that hasn’t changed with technology.”

Outside the computer lab, Phalen also honed abilities that would help her climb the corporate ladder. Elected president of her sorority, Phi Sigma Sigma, and tapped for Skull, WPI’s honorary society, she learned to feel comfortable stepping into leadership roles. She also learned to value her life outside work, whether it was taking part in clubs and activities, or hanging out with friends at the Goat’s Head Pub in Sanford Riley Hall.

“I just remember a collaborative environment,” she says. “And we had a lot of fun.”

After graduation, she worked as a software engineer at Digital Equipment Corporation for 12 years. A stint as an architect for customer engagement at IBM followed, and she joined EMC in 1999, staying on after the Massachusetts company was acquired by Texas-based computer hardware giant Dell in 2016.

“When I came to EMC, I knew I really wanted to move more into management,” she says. “I felt like I would make a bigger impact as a manager than as an individual contributor. I still love having conversations about software engineering, and I’m generally excited about it and enthusiastic about it, but I realized I was more and more interested in the dynamics of what makes an organization work, not just the technology.” 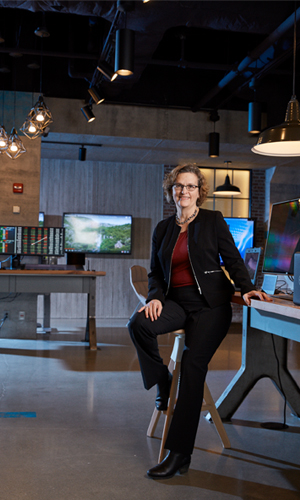 “The experience of working in a team to complete projects is absolutely still relevant,” she explains. “That’s just foundational, and that hasn’t changed with technology.”

A clear goal was a good start, but as Phalen soon realized, leadership is a skill like any other, and it requires study and practice. She began seeking out opportunities, forging connections across the organization and taking calculated risks, including volunteering to take charge of a bug-plagued storage virtualization product called Invista.

“It needed help, and the fact that I was willing to take that risk gave me more opportunities,” she says. The solution turned out to be acquiring another company, whose technology replaced Invista. She then took on responsibility for bringing that company on board, which facilitated her continued rise within the company.

Along the way, Phalen watched other leaders in action, met with executive coaches, read business books, and worked to sharpen the skills she knew she would need at the top—including what she refers to as “stubbornness”—explaining, “I’ve had to really get out there and make my point, and make sure people know that I’m going to get the job done, that the job is what’s most important.”

Having models to emulate made a difference—especially female executives, who were a rarer breed at the time she joined EMC. “There was one female vice president, and it was really helpful just to have a female executive visible,” she says. Today, she hopes to be that role model for younger women, and when she travels to different Dell sites, she always makes a point of meeting with members of an internal group called Women in Action. “We’ve had ‘Breakfast with Beth’ or just conversations,” she says. “I’ve talked with women in Chengdu, China; in Bengaluru, India; and in California, and had real dialogues.”

As she travels the world, she’s impressed by the similarities among young woman engineers who, no matter what culture they grew up in, hope to advance within a field that remains male-dominated. So many of their hopes and worries are the same. Work-life balance is a frequent concern, for example, as is developing assertiveness. Many have asked her how she gained the confidence to speak in front of crowds—like the 10,000 attendees at a recent Dell Technologies World conference.

“I tell people, I’m an introvert,” Phalen says. “It’s not something that comes naturally to me.” But like everything else in life, whether learning to program on punch cards or steering a large organization through radical change, confidence is a skill that has to be honed. “It’s about practice, setting goals, and finding opportunities. And once you do it, you might find out that it can be fun!”