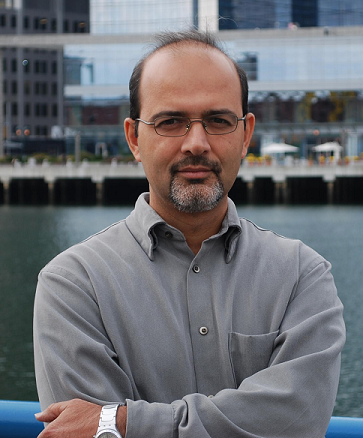 Macworld 2008, Steve Jobs for the first time announced deployment of global WiFi positioning in all iPhones and Apple products, and Apple partnership with Skyhook Wireless. Apple was the first company deploying this technology, and within a couple of years WiFi positioning became an integrated part of almost all the smart phones across the globe.

This presentation provides underlying challenges, solutions and system level view of a beacon positioning system, and shows how a fluid set of reference points in a very dynamic environment can be a foundation of a global positioning system which can locate mobile devices accurately and reliably.  The presentation then continues with covering the fusion layer in which WiFi positioning output gets combined with other positioning technologies, specifically GPS.

Farshid Alizadeh-Shabdiz is the chief data officer at Waylens, Cambridge MA, which pushes AI to the edge by building AI enabled dash cams for automotive market. Prior to that he was the chief scientist at Climacell, Boston MA, which leverages cellular network and IoT sensors to predict weather with high accuracy and high spatial resolution.  He joined Skyhook Wireless as the chief scientist and the first employee (2004 – 2017). At Skyhook, he has built a scientific foundation of WiFi/beacon global localization system, which has been captured in more than 40 patents. He is renowned for his pioneer work in WiFi/beacon global localization system. WiFi/beacon global localization patents have been licensed to companies like Apple and Google for more than hundred million dollars, and deployed in almost all the smart phones, globally. Prior to Skyhook, he was the senior technical member of the system and modem design of the first three satellite-based mobile networks at Hughes Network Systems. He owns forty nine approved US patents and more than fifteen publications, receiving more than ten thousand citations. He has taught graduate courses as an adjunct professor at Boston University (2004 - 2014) and Harvard University (2013). He holds a M.Sc. from Tehran University, and PhD from George Washington University in Electrical Engineering, and MBA from MIT Sloan School of management. He is a senior member of IEEE (2011), and he has been in steering committee of several localization conferences.