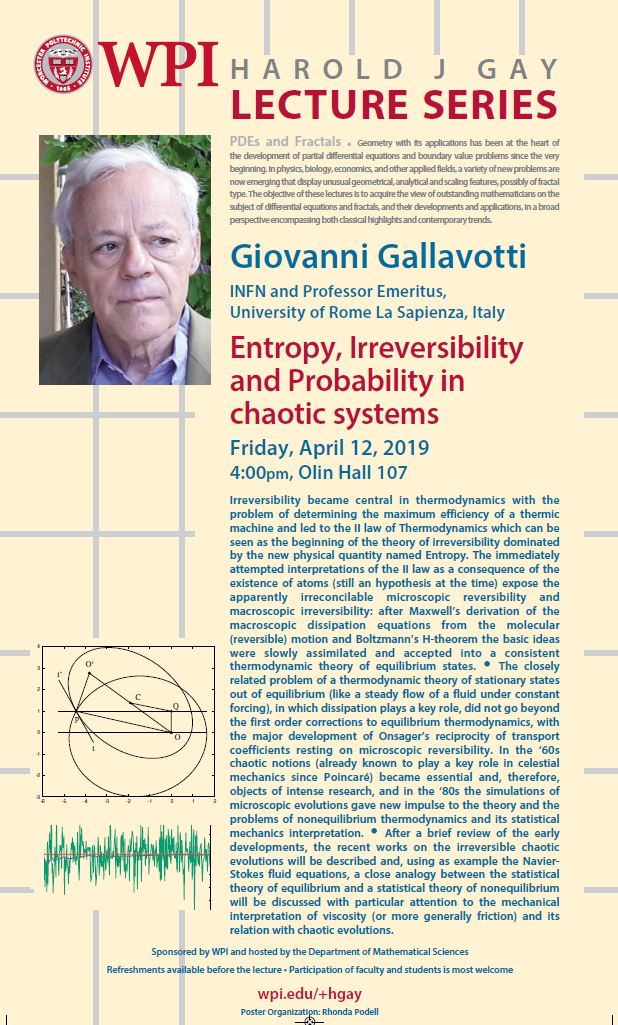 Abstract:
PDEs and Fractals • Geometry with its applications has been at the heart of
the development of partial differential equations and boundary value problems since the very
beginning. In physics, biology, economics, and other applied fields, a variety of new problems are
now emerging that display unusual geometrical, analytical and scaling features, possibly of fractal
type. The objective of these lectures is to acquire the view of outstanding mathematicians on the
subject of differential equations and fractals, and their developments and applications, in a broad
perspective encompassing both classical highlights and contemporary trends.

Irreversibility became central in thermodynamics with the
problem of determining the maximum efficiency of a thermic
machine and led to the II law of Thermodynamics which can be
seen as the beginning of the theory of irreversibility dominated
by the new physical quantity named Entropy. The immediately
attempted interpretations of the II law as a consequence of the
existence of atoms (still an hypothesis at the time) expose the
apparently irreconcilable microscopic reversibility and
macroscopic irreversibility: after Maxwell’s derivation of the
macroscopic dissipation equations from the molecular
(reversible) motion and Boltzmann’s H-theorem the basic ideas
were slowly assimilated and accepted into a consistent
thermodynamic theory of equilibrium states. • The closely
related problem of a thermodynamic theory of stationary states
out of equilibrium (like a steady flow of a fluid under constant
forcing), in which dissipation plays a key role, did not go beyond
the first order corrections to equilibrium thermodynamics, with
the major development of Onsager’s reciprocity of transport
coefficients resting on microscopic reversibility. In the ‘60s
chaotic notions (already known to play a key role in celestial
mechanics since Poincaré) became essential and, therefore,
objects of intense research, and in the ‘80s the simulations of
microscopic evolutions gave new impulse to the theory and the
problems of nonequilibrium thermodynamics and its statistical
mechanics interpretation. • After a brief review of the early
developments, the recent works on the irreversible chaotic
evolutions will be described and, using as example the Navier-
Stokes fluid equations, a close analogy between the statistical
theory of equilibrium and a statistical theory of nonequilibrium
will be discussed with particular attention to the mechanical
interpretation of viscosity (or more generally friction) and its
relation with chaotic evolutions.