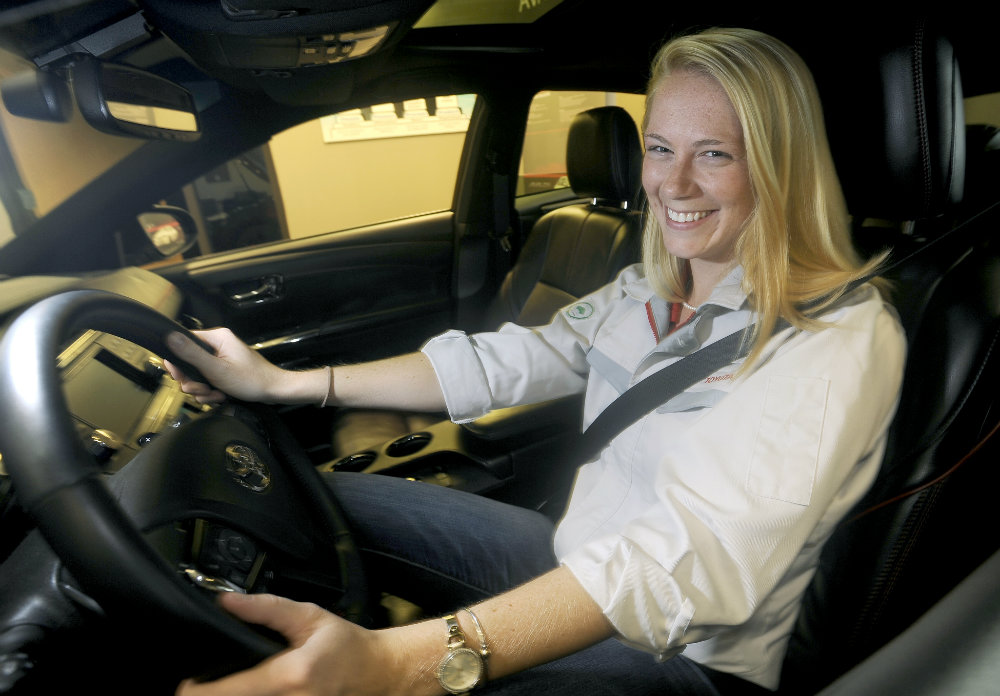 She had been working for Toyota for under a year when she got a firsthand lesson in the importance of good engineering. Dana Lenoir was running errands in her brand new Camry when another vehicle ran a stop sign, smashing into her car’s passenger side. The sedan was totaled; a steel support beam was now bent at a 45-degree angle. She, however, emerged unscathed—and fascinated.

“Of course, it’s a Michigan winter—January, 25 degrees below zero—and I’m on my hands and knees looking at the car,” she laughs. “I’m, like, ‘I got hit! I want to see!’ ” It was actually a cool learning experience.

Not many drivers would have that reaction, but for Lenoir it was a priceless example of theory become practice. As a safety and crashworthiness engineer at the Toyota Technical Center in Saline, Mich., she is part of a team responsible for developing and testing systems that protect drivers and passengers in the event of an accident—everything from seatbelts and airbags to the vehicle’s steel frame, and from the structure of the steering column to small but surprisingly important details, like the hood-locking mechanism. She has worked on the Sienna, the Tundra, and the Tacoma, and as she waited by the side of the road for a tow truck, she felt grateful that engineers  like her had made sure the Camry was crash-worthy, too.

Lenoir hadn’t planned to crash cars for a living. When she arrived in Worcester, a math geek from a small town in New Hampshire, her  goal was a career developing better prosthetic limbs for amputees. At WPI, she stayed on that track, majoring in biomedical engineering and spending the summer before her senior year at an internship with a medical device company. The following spring, she attended the Society of Women Engineers national conference in Chicago, aiming to line up interviews for a post-graduation job in the medical field. But curiosity got the better of her when she noticed the Toyota booth. “who gets to crash the cars?”she asked.

“You can!” the recruiter replied.

“So I got an interview,” Lenoir says, “and, fast forward, I’ve been at Toyota for three years. I had no idea the automotive industry had so many opportunities for a biomedical engineer.”

Although she had never considered working for an automaker, Lenoir soon realized it  was the perfect place to apply the skills and knowledge she had gained at WPI. A thorough grounding in biokinetics, or how the human body moves, is crucial for a researcher hoping to build better medical devices. But it’s also key to helping ensure that drivers and passengers can walk away from a high-speed car crash.

“At Toyota, I use biokinetics to control the movement of an occupant in a crash,” Lenoir explains. “I can change the way the neck moves, for example, by restraining the head and the chest differently. The littlest thing can change the way your shoulders move, or your hips move, and that can determine how much energy your body absorbs in a crash.”

A lot of Lenoir’s work takes place in simulation—“e-crashes, for lack of a better term,” she says. Many rounds of virtual modeling help her and her colleagues understand how the various components of the vehicles they’re working on interact with each other, and to explore their potential to cause or prevent injuries in a crash. But each component she works on, from seatbelt to sun visor, must also undergo physical testing. That usually takes place on a test track inside the vast Toyota facility, with a concrete wall at the end for the vehicle (and its unfortunate crash-test dummy passengers) to smash into. Post-crash, Lenoir and her team pore over the wreck and study detailed, multi-angle videos. If they discover a potential problem—for example, a part of the hood that can penetrate the interior, or an airbag that doesn’t meet or exceed the latest federal safety requirements—they work with the car’s designers to fix it.

The automotive industry has made great strides over the past decade, a period that saw annual highway deaths decline from about 43,000 to under 33,000 in 2013. Toyota’s Sienna minivan, the first car Lenoir worked on, recently earned a 5-star overall crash test rating from the National Highway Traffic Safety Administration. It’s gratifying to be on the front lines of vehicle safety, she says, and she’s glad to be putting her expertise to use saving lives. But she also loves her job because it doesn’t force her to sit behind a desk all day staring at a computer.

“Not only do I watch the car hit the wall, but I get to go out afterwards and look at every part of the vehicle and pare it down to understand what went right and what went wrong,” she says. “I don’t ever imagine myself being in a career where I’m not hands on—I’m glad I learned that about myself when I was at WPI!”

As a high school student, Lenoir visited WPI on the suggestion of a guidance counselor. Once on campus, she says, it took approximately five minutes to decide it was the place for her. “I was, like, ‘I know I haven’t applied yet but here’s my deposit,’” she recalls with a laugh. She liked that the classes were small, and that they moved quickly, plunging students deep into the subject matter.

“You’re totally involved in the things you’re working on,” she says. “And it’s not just the classes in your major. I took astrophysics with Professor [Frank] Dick and I loved it. I was completely engaged in my Spanish class. Looking back on it, the ability to drink from a firehose is something that WPI teaches us really well. Without that, I don’t think I would have been able to jump into a career that had so little to do with anything I’d ever learned before and be successful.”

Beyond learning the fundamentals of engineering and gaining the ability to immerse herself in a subject and learn it inside and out, Lenoir says, at WPI she also had the opportunity to practice working across cultures. And that’s something that she does every day at Toyota, a Japanese company where many of her colleagues have a very different approach to work. In fact, looking back on it, the IQP Lenoir completed at WPI’s Bangkok Project Center may have been what secured that crucial job offer—even though her work in Thailand had nothing to do with cars.

In Thailand, thousands of captive elephants are used in the tourism industry, providing rides or performing in shows to make money for their owners, who are often impoverished themselves. But elephants often do poorly in captivity, and many of Thailand’s pachyderms are overworked and abused. In 2011 Lenoir was part of a team of students, half from WPI and the other half from Bangkok’s prestigious Chulalongkorn University, who developed a checklist with quantitative items that, when weighted and totaled, could be used to determine a domesticated elephant’s quality of life. The team then surveyed elephants living in different situations throughout Thailand and reported their findings to the government, which had recently passed a set of elephant welfare laws.

“Our hope was that our guidelines would help the lawmakers make better educated choices about moving an elephant in or out of a certain situation,” Lenoir explains.

Through the course of the project, she learned some interesting facts about elephants. “They only sweat through the pads of their feet,” she reports. “So if they’re dehydrated, you won’t see sweat on their feet. We were able to look at how sweaty an elephant’s foot is. Wild elephants always had a ton of moisture around their toenails, while the elephants we found working in the tourism industry were out in the sun all day and their feet were super dry.”

She also learned about humans. Communicating with her Thai colleagues across a language barrier was challenging. Lenoir learned to appreciate their nonverbal cues, and to create presentations that were clean, clear, and understandable to others who, while they may have a thorough grounding in engineering, don’t have a perfect grasp of English.

“That’s been directly relevant to what I do today,” Lenoir says, explaining that at least once a week, she meets with her Japanese counterparts at Toyota via Skype. Their work culture is very different, she says, and that becomes even more apparent when engineers from Toyota headquarters visit the Michigan facility. “Typically, in America you are given an assignment, you finish your assignment, and when you’re done, if you’ve checked all your boxes, you go home,” she says. “The Japanese culture says you stay until everybody’s stuff is done. Sometimes they won’t leave work until 10 or 11 at night.” That’s considered a bit extreme in America, Lenoir says, but it’s important to appreciate the “different kind of professionalism” her Japanese colleagues bring to the company. And, she adds, “the ability to sensitively communicate across cultural barriers is not something I think I would have ever learned had I not done that IQP.”

Of course, as a woman in engineering Lenoir is not only navigating the cultural barriers between Japan and the United States. As at WPI, the engineers at the Toyota Technical Center are mostly male. Lenoir has no complaints, but she is doing her part to recruit more young women into the profession, especially by targeting students in local high schools, middle schools, and even elementary schools with the message that careers in science and math are exciting—and open to everyone.

She has used eggs to simulate car accidents, guiding children through the use of the scientific method to analyze the accident—and reinforcing the need (for crash-test eggs and humans) to always wear a seatbelt. She also reassures young people that the image of the engineer as nerdy math whiz is outdated.

“You wouldn’t believe the number of students who say, ‘Well, I don’t like math, so I’m not going to be an engineer,” Lenoir points out. “Well, computers can do the math. I can set up my computer and very quickly write a program that says, ‘Do this math for me.’ What people don’t realize is that the engineers we need now—and, in my opinion, the engineers that WPI produces—are problem solvers, thinkers, communicators, and hard workers—people who want to learn.”

She might be too modest to admit it, but Lenoir is effectively describing herself. And she doesn’t shut off those aspects of her character when she leaves Toyota in the evening. She is also a dedicated volunteer, putting in several hours a week at a therapeutic horseback riding facility, teaching people with physical, emotional, and intellectual disabilities to ride.

“It’s the greatest place ever,” she enthuses. “I go there every Monday night and then every chance I get after that. One of the greatest things about working for Toyota is that they so wholeheartedly support my volunteering. Every year, if I prove that I volunteered over 100 hours they’ll make a donation to the organization I’m volunteering for. They want us to be community members, not just people who work in scary buildings that you can’t get into.”

Lenoir has been working on a new Toyota model—which one, she says, is top-secret—and is preparing for her first trip to Toyota headquarters in Japan as soon as this winter.

“There’s a lot of cool development opportunities in my future,” she says. “I’m sure of it!” 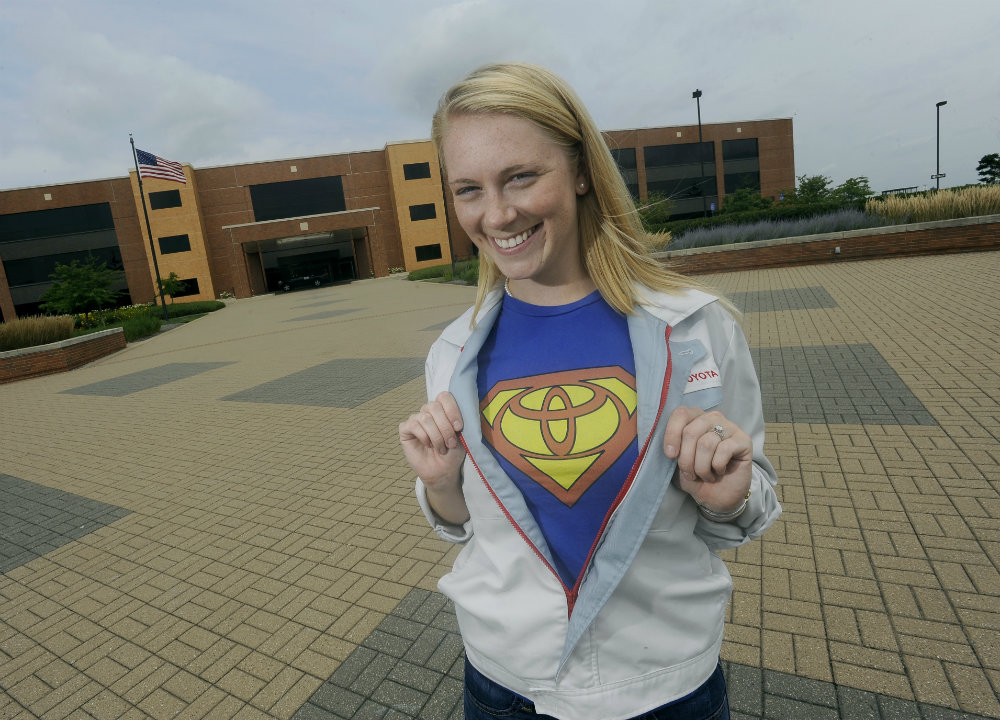 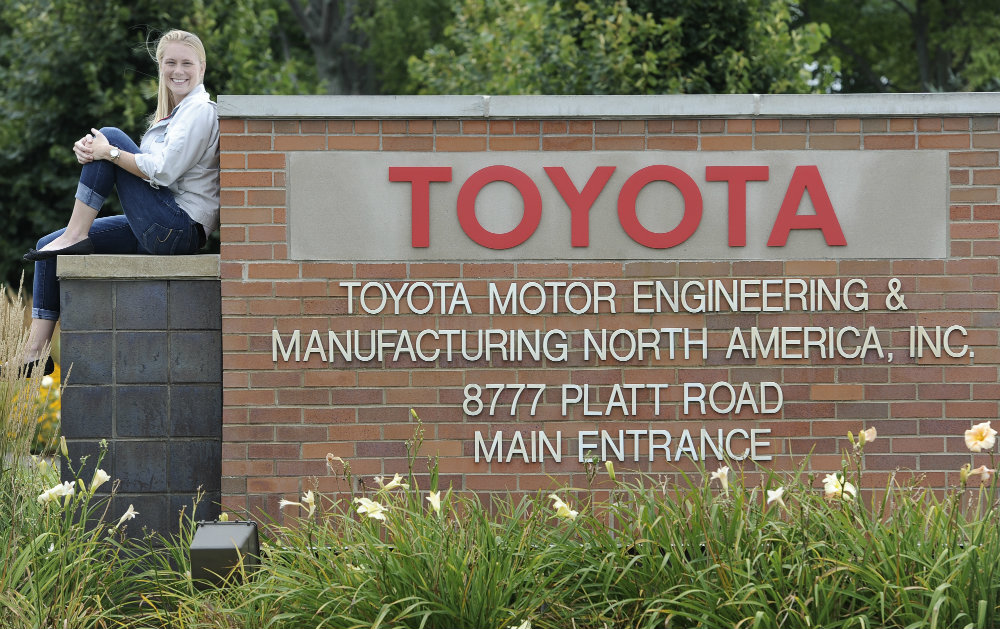