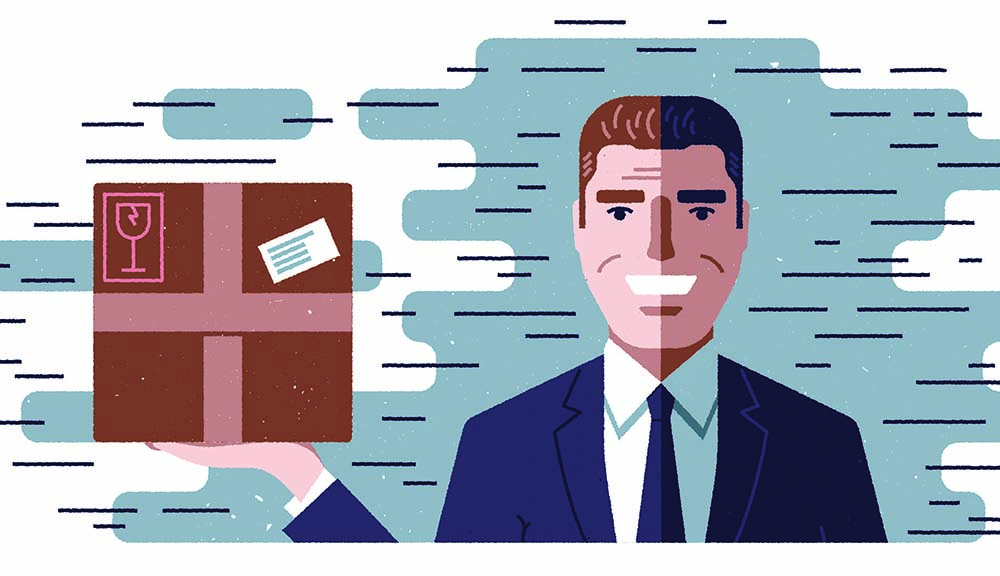 Once upon a time, a big brown truck full of big brown boxes would bounce up your driveway on squeaky springs. A driver in a crisp uniform—brown, of course—would ring your doorbell with your parcel under one arm and a clipboard in hand. You’d sign the receipt—bearing down to make carbon copies—and the driver would roll on to the next customer’s house.

Today, a host of brightly colored competitors shuttle goods across oceans at dizzying speed, by land, sea, and air, using everything from airplanes to hand-held digital devices to hasten delivery. Majed Zambaraji is out to challenge the models established by the big players, along with the fundamental assumptions of the traditional courier industry. By leveraging new technologies and the nascent sharing economy, he plans to deliver a new model that will leave the others in the dust.

A partner, not a provider

People have always bought more than they can carry home, writes Greg Niemann in Big Brown: The Untold Story of UPS. The global giant got its start in the early 1900s by providing an add-on service for shoppers at exclusive department stores.

The face of “third party logistics” (3PL) has changed radically since then. In today’s fast-paced, ultracompetitive global economy, Zambaraji says logistics is a “strategic differentiator” that can make or break an online business. “If it’s not very lean, if it’s not structured right, it becomes a hindrance to growth. Unless it’s very efficient, unless you can deliver reliably … your business will fail.”

The growth of e-commerce is disrupting the traditional retail model, he says, upping the need for companies to compete internationally, and forcing them to speed up their supply chains. “This has created a void in the logistics market for a high-volume, low-cost business express delivery model.

“A lot of businesses today are looking for ‘logistics partners,’” Zambaraji explains. “They’re not looking for a provider, they’re looking for somebody who can solve problems and drive growth.” He’s positioning his new venture—Time Express Parcels, based in Dubai—to do just that. “The time lag between when a consumer places an online order and when the delivery is received creates an opportunity for someone to give consumers alternative buying choices,” he says. “This makes it essential for online businesses to have their products delivered on the same day they were ordered.”

It’s that innovative spirit that made Zambaraji grow restless at UPS, where he previously held the post of vice president for the Middle East, India, Central Asia, and Africa. His charge was to lead development and expand the global giant’s footprint in those markets, which comprise more than 74 countries and territories. “UPS hired me because I am an entrepreneur by nature, but I felt very limited in what I could do—even though I was a vice president in the company.”

He yearned for the excitement of his earlier career, when he partnered in the start-up of RAK Logistics. Zambaraji speaks glowingly of his travels to open RAK branches in China, South Africa, Spain, Turkey, and the UK.  “I literally put up the curtains and chose the furniture,” he says. “I had to hire people in countries where I didn’t speak the language, and figure out the taxation systems. When you’re building from scratch like that, every day is a new learning experience, and you can put your mark on everything, from A to Z.”

It’s that zeal that landed Zambaraji on the cover of Logistics Middle East in 2013, with the headline, “Big Game Player.” Since then he’s climbed the magazine’s “3PL Power List” of the region’s 25 most influential logistics executives.

Zambaraji majored in mechanical engineering at WPI, drawn to the field by his strengths in math and science, and went on to earn a master’s from Tufts. “When you’re in college, your teachers are actually investing in you,” he says. In particular, he remembers Professor Jack Boyd for his deep investigations of thermodynamics. “All the skill sets you develop in your courses become the foundation for your development throughout your career.”

Upon graduating from the MBA program at BU, he was selected for GE’s fast-track Financial Management Program. The next two years were a whirlwind, as he rotated through different placements across Europe. At the end of each workday came hours of study for the company’s master’s-level program. “If you fail one of the exams you’re kicked out of the program,” he says. “You’ve got an intense work schedule, very competitive classmates, and, on top of that, you’re living out of a suitcase.” He thrived on the experience and in the innovative corporate culture at GE, where he spent a total of 11 years taking on challenges in exports, sales, and operations.

Zambaraji’s transition into the logistics industry—and an opportunity to return to the Middle East—came in 2006, when he was offered a post as CEO of Agility Logistics. The move to Dubai brought the Lebanese-born UK national and his wife (also Lebanese) closer to their home ground. They are now raising their two young daughters there.

Today, as CEO of his own company, Zambaraji has the freedom to put his innovative energy where it counts. Time Express Parcels answers the accelerating demands of the e-commerce sector, offering same-day delivery and weekend service up to 9 p.m. “I don’t see the big integrators as my competitors,” he says. “Part of why they have been able to dominate the courier business is because of the high barriers to entry in creating hubs as well as the networks allowing rapid delivery all over the globe.”

In the established model of logistics, a single company would own every node of the delivery service, from origin to destination. A bevy of brown UPS trucks ruled the road for more than a century. In 1973 FedEx upped the game with its fleet of orange-and-purple planes, loaded at midnight for next-day delivery to remote cities. But with today’s technology, “You can piggyback with a guy who’s already operating in Nigeria or Minneapolis,” says Zambaraji. “The new model is to capitalize on what I call ‘marginalized’ logistics.”

With the growth of e-commerce, just-in-time inventory, and international sourcing of manufactured goods, the cost of owning and maintaining so much infrastructure in so many different locations is making the big integrators too “heavy” to respond in a flexible, cost-efficient way, Zambaraji says. The age and size of a company are no longer badges of distinction when small, upstart companies can work together to move freight faster, at a much lower cost.

To explain the new world order of “courier community sharing,” Zambaraji makes an analogy to other game-changers, such as Uber, where taxi companies are being challenged by a network of private cars summoned by smartphones. “With today’s technology, you don’t need to own your own network across the globe. We’re able to tap into underutilized assets that are lying around everywhere.”

For example, he can cut costs by capturing the downtime of trucks and vans that are already licensed to carry cargo, or locate empty space on ships and planes. “When independent operators network as a community of partners to provide a seamless service for a customer, we become very strong. And, as a consumer, you get a much faster collection time, a better transit time, and a cheaper service.

“Technology is the enabler that allows you to drive business in a much more efficient way and increase connectivity into global independent networks, which wasn’t possible in the past. Consumers benefit with more choice, greater visibility, better speed and reliability, and cheaper rates,” he says. “When you take cloud computing and the Internet of Things (IoT), and you take smartphones and apps—when you put all four of these together, you have a very dangerous recipe to actually disrupt some big industries.”

Time Express Parcels is investing heavily in technology, he says, with real-time assignment of pick-up tasks to drivers, and tracking and apps to relay potential missed deliveries to a backup system. Drivers carry Android phones with apps that tag the GPS coordinates of every customer. He notes that this is especially important in the Middle East, India, and Africa, where streets and house numbers are not as clearly defined as in the United States and Europe.

A dedicated unit of Time Express Parcels focuses on transport of pharmaceutical products and medical specimens, which need specialized handling and monitoring. Smart sensors can give real-time readings of temperature, humidity, vibration, and other variables that could compromise quality during transit. “We can provide proof that the content has not been tampered with, and that it has preserved the same characteristics as when it was sourced,” he says, pointing out that the drug or diagnostic being delivered could save a life.

Providing a longer window of safe passage for medical samples expands the scope of clinical trials, which previously had to be conducted within a restricted radius. “We’re now up to 96 hours, and there’s discussion of going for 120 hours,” Zambaraji says. “A drug being developed in the U.S. can now pull in patients from other parts of the world, because it’s possible to maintain the integrity of the product at a high enough standard.” 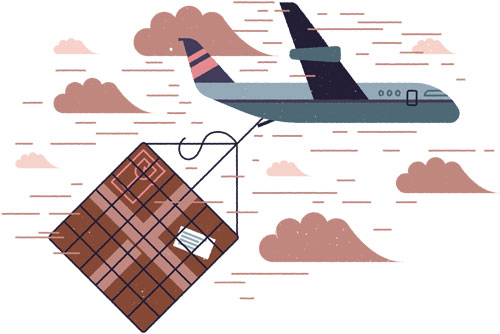 ​Zambaraji shares his expertise on emerging technologies at industry conferences like The Big 5 Dubai and Leaders in Logistics. His sessions address transformative topics such as UAVs (unmanned aerial vehicles—the preferred nonmilitary term for drones), which are on the horizon as a vehicle for delivery and for remote monitoring of infrastructure—and the application of big data and cloud computing to streamline the complexities of the supply chain. In addition, he explores the potential of the IoT to connect transport vehicles, warehouse facilities, and even products, with real-time communication. All of these will have tremendous implications on supply chain logistics.

After the demands of the business day, Zambaraji likes to unwind with a half-hour run that he says helps him “recalibrate.” Shrugging off the stress of his job, he says, “You know, it’s amazing, when you do something you’re passionate about, you don’t get tired. Your mental state just drives you.” With work that’s both demanding and exciting, “It all comes together, and you don’t think of it as work. Maybe it looks that way from the outside, but for me it’s an intellectual challenge when you’re trying to create something that’s better than what’s out there right now.”