For Denice O’Connell, bridging the worlds of veterinary medicine and medical research is not always a comfortable space to occupy. “How do you spend all these years studying to save the lives of animals, and then utilize animals to answer scientific questions?—That’s the question I’m asked most of all.”

She is a committed advocate for every animal in her care—she is equally committed to the potential cures and discoveries that studying these animals may unlock.

By her own admission, bridging the worlds of veterinary medicine and medical research is not always a comfortable space to occupy. “How do you spend all these years studying to save the lives of animals, and then utilize animals to answer scientific questions?” she acknowledges. “That’s the question I’m asked most of all.”

For O’Connell, director of global animal welfare and attending veterinarian at AbbVie, a global pharmaceutical firm in Worcester, navigating these two objectives has not been the downside of her professional life; it’s been the point of it.

She identified her love for both animals and laboratory science at an early age, though how to merge them effectively remained less clear. Like many young animal lovers, she set her heart on becoming a veterinarian; however, she also feared that becoming a practicing vet wouldn’t allow her to roll up her sleeves and get involved in leading-edge scientific research.

“Once you start practicing, things can become fairly routine,” she says. You do vaccinations, spays and neuters—and encounter many conditions that are very important to treat. But, in private practice, you often don’t have the time or resources to dedicate to researching every obscure disease … I wanted to know it all.”

O’Connell discovered the path less taken during a job-shadowing assignment in her senior year of high school. “I spent one week in private practice, one week at the Oregon Zoo, and a week with a veterinarian who did research for Oregon Health and Science University (OHSU).” she recalls. The vet at OHSU wasted no time in giving her a reality check on what the life of a researcher entailed, but O’Connell was not to be dissuaded.

“She had papers stacked everywhere, and she said to me, ‘These piles represent all the regulations and laws I need to know and enforce every day.’ She gestured to another stack of papers. ‘And these piles hold all the work I’m doing to enrich the lives of the animals I’m working with and provide them with play and social housing.’ That was all very appealing to me,” recalls O’Connell.

O’Connell’s search for an undergrad program that married her mutual interest in animals and research brought her to WPI, an experience she credits as guiding her toward biomedical research.

“As an engineering school, WPI has so many people with really wonderful scientific minds,” she says. “And I had an intellectual need for science in my life.” She took advantage of WPI’s early acceptance program with Tufts University’s School of Veterinary Medicine, creating a seamless transition from her undergraduate work to her postgraduate work in veterinary school.

After earning her doctorate, O’Connell began her professional career at the University of Massachusetts Medical School, where she served first as a clinical veterinarian, and later as director of the Department of Animal Medicine, collaborating closely with the University’s researchers. It was here she first met Jean King, a neuroscientist whose extensive work with neuroimaging often required use of animal models.

Now the Peterson Family Dean of Arts and Sciences at WPI, King soon saw that O’Connell was a truly rarified veterinarian. “She understood that the animal research wasn’t something we wanted to do—it was what we needed to do,” King says. “She cares deeply for these animals, but she is also about the research and what diseases we’re trying to solve.” She noted that O’Connell is particularly skilled at “understanding both objectives, which is generally not the case.” 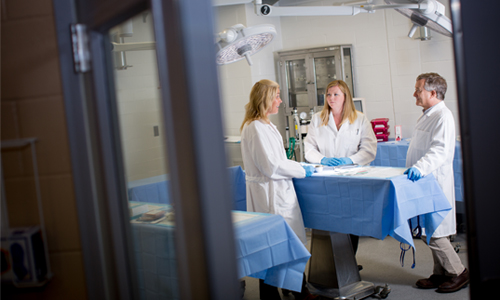 Denice O’Connell '01, DVM, adjunct assistant professor at Cummings School of Veterinary Medicine at Tufts University, plans for a class in the research and teaching surgical suite with members of the MS in Laboratory Animal Medicine (MSLAM) Program.

O’Connell may be a dedicated partner of the researchers she assists, but she is an animal advocate, first and foremost. “It’s easy to be blinded by the desire to cure a disease,” she says. “For the scientists, their first thought may not be, ‘Am I asking the right question with this animal today?’ That’s where I come in. And I know we’re all there for the same end cause.”

However, she concedes that she occasionally finds herself playing the heavy during research. “There are times when I’ve had to say, ‘We’re stopping now, because this isn’t going the way it needs to go. Let’s talk about it, regroup, and figure out another way.’” She maintains that these moments are as much about good science as about ethical animal care. “Working with an animal that’s hurt or in distress doesn’t create a good model, anyway. It behooves all of us to keep our animals happy and well cared for.”

Years into her career, the ethical issues surrounding her work became deeply personal. “I met one of my best friends in veterinary school and we were two peas in a pod,” she says. “But my decision to go into laboratory medicine was an issue for her. She felt that my career path was unfair to the animals we were supposed to protect. We stayed best friends (we were in each other’s wedding) … but we didn’t talk about it.”

The tension between them went largely unspoken, until her college friend telephoned her at work, desperate to break the silence. Her friend’s firstborn son was suffering from complications caused by a prenatal stroke, and answers were coming up short. O’Connell explains, “’I have to ask you a question,’ she began. ‘Do you know anyone who’s doing research on pediatric strokes? Because I will do anything.’”

O’Connell got right to work reaching out to the medical experts in her circle, but the moment also marked a galvanizing moment for her personally. “At some point in our lives, all of us are at someone’s bedside, thinking, ‘I would do anything to help you,’ but we don’t know who to turn to. I’ve had the privilege of working with scientists who live and breathe what they do, just to find that cure,” she says. “That was when I knew I’d made the right decision with my career.”

Unfortunately, that would not be the last time O’Connell’s professional path was in service to a personal challenge. In a painful twist of irony, she found herself reaching out to the same network of specialists several years later … but this time, the patient was her own daughter, who also had suffered a prenatal stroke that caused limited paralysis. Once again, her colleagues and their work—work she’d helped support—became invaluable. “Because of my career, I knew where to go and what to ask. I feel so lucky to be part of this world of science.” [Both O’Connell’s daughter and her friend’s son are well on their way to independence and recovery.]

These experiences, though far too close to home, helped O’Connell appreciate why the ethical dilemmas her career posed were worth navigating. “We buy medicine off the shelf, we take it, and we feel better. But most people never get to see the biomedical research behind it,” she says. “We wouldn’t have diagnostic tests, treatments, medicines, and surgeries without having done this research first.”

In 2017 O’Connell left the world of academic research at UMass Medical Center for a new position with AbbVie. She is not the first to acknowledge the negative public perception of animal research within “big pharma,” but her experience could not be further removed from those stereotypes. “When it comes to the interests of the animals, this is one of the most forward-thinking companies I’ve ever seen,” she says.

As evidence, she points to her newest position as director of global animal welfare. In this role, O’Connell oversees the treatment of animals at all the company’s domestic and international sites, a responsibility that goes far beyond basic compliance. “I provide assurance that all our sites go far beyond just meeting federal and state requirements,” she says. “If animals need to be socially housed, they’ll be socially housed. If they like to nest and play, they’ll have the opportunity to do that.”

In fact, the decision to involve animal models in research is generally one of the last steps in bringing a drug to market, and one that O’Connell is instrumental in making. “Before animals become involved,” she says, “a lot of people will come to me and say, ‘I have this idea. Does it make sense to do this with a mouse? Should it not be a mouse?’ We have those conversations first. The last thing anyone wants to do is go down the wrong path in research.”

She also notes the countless research methods that typically precede animal involvement, from basic bench work to testing with newer technologies, such as “organs on a chip” [microchips that simulate lungs, kidneys, and even brain function].

“With organs on a chip, she explains, “you have microscopic cells that mimic an organ, and you can essentially see in a petri dish how a specific organ is going to respond to different drugs.”

Part of O’Connell’s job as an animal advocate is to recommend viable alternatives to living models whenever possible. “Historically, rabbits were used to look at endotoxin levels in compounds, but now we have other ways to do that in vitro,” she says. “Due to their specificity, some alternatives work as well as, if not better than, the live rabbit model.” 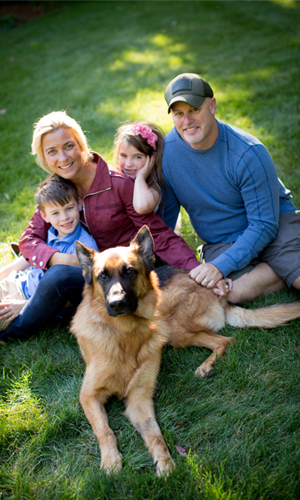 Call of the Wild

Last fall O’Connell made her way back to the WPI campus as a guest of Jean King. Her longtime friend and collaborator had organized a conference called Next-in-Bio, an event designed to give undergraduates exposure to emerging career paths in the life sciences. King knew that O’Connell could be a powerful voice to the next generation of researchers. “Denice took the grounding she gained at WPI,” she says, “and decided that she wanted to be not just a vet, but a vet who helps other people solve major problems—which is very WPI, in terms of theory and practice.”

O’Connell’s message to the students in attendance was not so much a clarification of what her job entails, as much as a declaration that her job exists at all. “A lot of students haven’t considered a career in this field because they didn’t know it was an option,” she says. “In fact, I think that’s true for a lot of veterinarians.”

Her argument to those who would take up her mantle is not that they too can chart a path to ethical animal welfare, but that there is no other way. “I spend every day figuring out how to make our animals happier and enriched, because someday those animals might save my friend’s son’s life, or my own child’s life,” she says. “Somebody has to be an advocate for those animals. And I am more than happy to be that person.”