In 1942 scientists in Los Alamos, New Mexico, began work on a top-secret project code-named “Project Y.” Today the world knows Los Alamos National Laboratory (LANL) for its role in the Manhattan Project and the nuclear weapons that evolved from that historic work.

Fifty years later, at the Nevada Test Site, the United States staged its last underground test of a nuclear weapon. Since 1992, the nation has observed the terms of the Comprehensive Test Ban Treaty. In the post–Cold War era, with a moratorium on the live testing of nuclear weapons, the scientists at LANL and its partner laboratories have relied on other means to certify that the existing stockpile remains stable, safe—and ready for action, should the need arise. The new strategy, known as Science Based Stockpile Stewardship (SBSS), is based on what Los Alamos Science calls “an iterative cycle of theory, experiment, evaluation, and innovations.”

Frank Addessio, who has spent the last half-century modeling scientific problems, takes the long view. Reflecting on his 40 years at Los Alamos, he says, “Our job here is still as important as it was. It’s just that there’s been a shift away from doing experiments on the large-scale components. We can’t test full-scale devices, so we’ve had to come up with other ways of certifying them.” At 73, he’s lived through some historic changes. Even as technology evolves, and history and politics shape the research agenda, it’s the underlying theoretical questions about materials behavior that excite him. 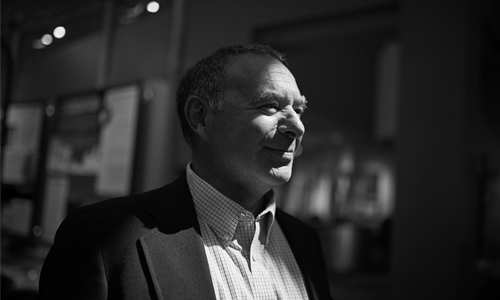 For Addessio, even as technology evolves, and history and politics shape the research agenda, it’s the underlying theoretical questions about materials behavior that excite him.

Addessio joined the Laboratory in 1978 to work on modeling loss-of coolant accidents related to nuclear reactor designs. Following the Three Mile Island incident, which altered the face of that industry, he transferred into the Theoretical Division. Today he’s working at the single-crystal and polycrystal length scales, zeroing in on the properties of individual materials, to help scientists understand how the materials that make up weapons behave under normal—and unexpected—conditions.

What happens if a weapon is dropped during transport? Or if there’s heat from a fire in the storage facility, or a sympathetic shock from a nearby explosion? Scientists at LANL examine safety scenarios, as well as design performance under rigorous and demanding operating conditions. Addessio points out that nuclear weapons are composed of relatively exotic materials. “Some of these materials decay radioactively, emitting decay elements and generating heat. That is, like most things, they age!” To explore conditions of interest, scientists use a combination of experimentation and computational modeling.

Addessio draws a simplified analogy to testing the design of an automobile frame made of titanium and steel. “You could build the frame,” he says, “then run it into a wall and observe what happens. If it didn’t work, you would change the design and run it into a wall again, over and over.” He points out that this process can get expensive, and, in the assessment of nuclear weapons, there are safety and environmental considerations, as well as the constraint of the nation’s “zero yield” policy.

“To understand how the materials—in our example, titanium and steel—are going to deform when they hit the wall,” he says, “we perform‘simple,’ small-scale experiments—and I put simple in quotes—to develop stress-strain models. Using finite element analysis, we can model the entire frame, and the impact of that structure against the wall. Now we can run thousands of simulations on computers that are much cheaper and quicker.”

The synergy between lab research and the power of the Advanced Simulation and Computing program is the basis of SBSS. It takes a lot of back-and-forth to refine the models. Ideally, theory and practice agree— but, he says, even when the models aren’t perfect “the hope is that they put us in the ball park, so maybe instead of doing 25 experiments we only have to do 10.”

Addessio has closely studied the properties of titanium crystals and composites. A current focus is a plastic-bonded explosive, or PBX, which contains organic energetic grains held together by polymer binders.

“Because of the atomic structure, the grains of the energetic component are subject to deformations in their orientation,” he notes. “As with wood, if you cut it with the grain or against it, it’s going to react differently, depending on direction. In some of our simulations, we consider the deformation of a collection of atoms to observe how the crystalline structure changes (e.g., phase transformations), and the impact those changes have on the stress and strain response. That determines the response of the engineering structure—just as in the earlier analogy of the automobile frame.” 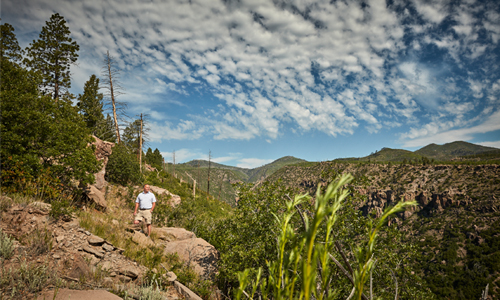 An avid hiker and bicycle enthusiast, Addessio says he’ll never get tired of the views of New Mexico, his adopted home.

Addessio refers to the field of continuum mechanics to characterize how, over time, his work has progressed through all phases of matter.

Along the way, he’s had to fold in knowledge from many disciplines. He’s worked on modeling everything from jet flaps, to supersonic flow fields within lasers, to potential accidents in nuclear reactors. For a time, under a cooperative agreement with General Electric Aircraft Engines, he worked on models of a composite fan blade for a turbofan engine. “They wanted computational models to look at a foreign object damage problem. We went through the same steps I outlined earlier. Experimentalists looked at the various components in the composite; people like me were developing the models, so they could run simulations of the damage that might be caused by a five-pound turkey vulture.”

In the course of his career, he says, “I went from aerodynamic applications, to gas-dynamic lasers, to chemical lasers, to nuclear reactor safety, then to basic numerical techniques, to macro-mechanical solid mechanics, to single-crystal solid mechanics.” His education—both classroom and self-taught—prepared him well. “In this line of work, you can’t assume that what you learned yesterday is going to be applicable tomorrow,” he says. “So you’re constantly in a process of educating yourself.”

As a mechanical engineering major at WPI, he faced that challenge during a summer internship at Bell Telephone Laboratories. “I was assigned to a project involving a vibrations problem. I’d never had a course in vibrations!” he says. “That’s when I understood that I was going to have to work in areas in which I didn’t have a formal education.” The work at Bell Labs led to a master’s degree from Stanford, and then a PhD from Purdue. Unlike the young colleagues whose computer skills he admires today, he’s had to come up to speed through self-study.

Asked about his role in keeping the nation safe, Addessio deflects that charge onto LANL’s Weapons Physics division.

“They’re the ones that are really dealing with ‘the problem.’ I’m in the Theoretical Division. Our role is to give them better models.”

He counts his colleagues in the Theoretical Division—specifically the group that focuses on fluid dynamics and solid mechanics—among his perks. “My coworkers are very smart and talented. I served as their group leader for a while—it’s an honor to work with these people.”

The importance of a good team became clear to him in his years at WPI: He credits his Lambda Chi Alpha fraternity brothers for helping him through some rough times in college by, as he puts it, “providing relief with a humorous perspective.” He’s also grateful for the support of Dean Bill Trask, who kept him in school and connected him with the summer internship that launched his career. 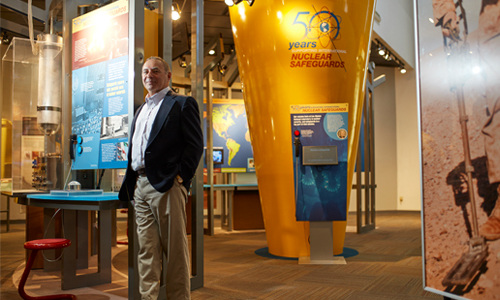 Addessio at an exhibit representing 50 years of nuclear safeguards at the Bradbury Science Museum, the chief public facility of Los Alamos National Laboratory.

The most recent—and the most rapid—“phase change” for Addessio revolved around retirement. Last year, he thought he’d reached a good point to wrap things up. But the activities he’d anticipated—biking, skiing, hiking, jogging, flying Cessna 172s, and restoring Alfa Romeos—were curtailed by knee replacement and what he calls “other exigencies of life that occurred as I ‘matured.’”

He summarized the turnaround in a recent class note for the WPI Journal: “After 40 years at the Los Alamos National Laboratory, 35 of them in the Theoretical Division, I decided to retire in January 2018. Two weeks later I became bored and returned to the Lab part-time.”

It was more than boredom that brought him back to the work he loves.

It was approval of a grant proposal he’d submitted with colleagues. “That encouraged me to come back and finish what I had proposed. Currently, I am working with a combined theoretical/experimental team that is concerned with the high-rate deformation of organic, single-crystals of energetic materials. The research includes anisotropic, nonlinear elasticity; plastic slip; phase transformations; and brittle failure. Future concerns will consider twinning.” His note concludes, “I remain grateful for my undergraduate education at WPI and for the friendship of my brothers at LCA.”

As a retiree, he now enjoys the opportunity to remain engaged with problems of interest, relieved of some of the bureaucratic responsibilities of his former role of a full-time employee. The government allows the Lab to allocate 6 percent of its budget toward basic science research. Frank Addessio—although working part-time, for a small stipend—is still giving 100 percent to the pursuit of answers.

“During my career I have pursued research within a number of scientific fields.” he says. “While this has proven challenging, it has given me a broad perspective regarding how different pieces of science fit together. The downside, of course, is that at times I feel like a dilettante.

“I had the notion that as I aged, I would become more comfortable with the knowledge and experience I had obtained. The opposite is true. I’ve become less confident with how much there is left to understand!”