When the WPI faculty grappled with the idea of creating a new major in Interactive Media and Game Development (IMGD), some interesting conundrums arose.

One difficult issue was what to name the new major. There was some support for avoiding the word “game” in the title … [to] avoid resistance on the part of parents.

WPI launched one of the nation’s first undergraduate degree programs in 2005, with graduate-level offerings soon following. Today, with more than 500 colleges offering courses in game design, and academic journals and conferences devoted to the discipline, some misperceptions still linger.

“When people think of this program, they picture the console games kids love to play,” says associate professor Jennifer deWinter, who serves as program director. “Society still has a stereotype of the gamer as a 17-year-old socially inept boy.” At admissions events, deWinter sometimes encounters dubious parents. “They only see the fact that their child enjoys playing Halo, for example—they don’t see the broad application of interactive media.” While IMGD students are usually passionate gamers, they are also artists, storytellers, musicians, and skilled computer scientists, preparing for professional roles in an industry that is defining new ways to engage with the world.

What follows is a mere sampling of the kinds of learning taking place in this space—and a few mind-bending games.

Be Your Avatar (Adventures in the Multiplayer Classroom)

Professor of practice Lee Sheldon starts his class on writing characters by quoting from the classics: Plato, Homer, and Aristotle. He doesn’t lecture long. His students are soon swept away to the jungles of Costa Niebla, a made-up country in Central America. The class takes the form of a multiplayer adventure game, with the students swept up in a quest for relics of an ancient civilization. Their first task is to recreate themselves as avatars, which they describe in a short paper, then introduce in class. “Do not merely read,” the instructions for this assignment demand. “Be your avatar. Dress accordingly.” Props are encouraged. Real names are left behind.

They are playing to win from the start, accumulating XP (Experience Points) as they work their way up toward Level Eight (to pass the course), through written assignments and presentations. Working solo and in “guilds,” they solve puzzles, navigate hazards, and respond to unforeseen events. The smart ones have already scored 5 XP for having the book (print or digital) by the first day of class. The text is Sheldon’s Character Development and Storytelling for Games. Sheldon has also shared his “class as a game” methodology with the world through his book The Multiplayer Classroom. “They’re learning almost without realizing it,” he says. “We have yet to discover a class that cannot be taught this way.”

The classic board game Monopoly (called “The Landlord’s Game” in the original 1903 version) was created to expose unfair economic practices. In the 21st century, assistant professor Alexandrina Agloro’s students are asked to look into their own presumptions about the world they inhabit, and to put computer games to use in the fight against injustice.

They begin by considering questions like “When did you first know you had a race?” They make board games about their families’ journey to the United States. They formulate games that factor in the needs of different people’s bodies. Agloro’s goal is to help them understand that what seems normal, or neutral, to them is not to someone else. 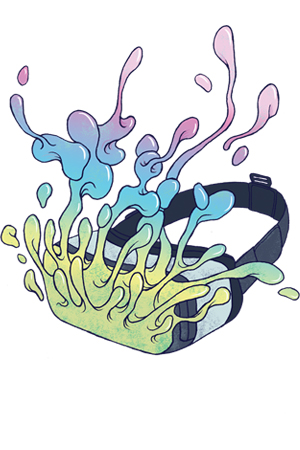 Every media piece is embedded with social commentary of some sort, with the biases and interpretation of the maker,” she says. “There’s no such thing as a neutral artifact.”

Making assumptions about what’s normal can be disastrous in engineering. For example, airplane cockpits were originally designed for a pilot of “average” height—a one-size-fits-all approach that caused many crashes, until adjustable seats or pedals became standard. Agloro notes that facial recognition software was initially unable to read darkly pigmented skin.

In class, they critique each other’s game pitches in a Project Runway–type showdown. Winners are exempted from creating and presenting a new game design the following week. (The seven-week term is too short to build a playable game, but the students write them up as game design documents—which serves as valuable career preparation.) “It would be our failure as educators not to prepare them for the market as it exists and see how they can be different in it, and demand difference,” says Agloro.

For the last two years, WPI students have been selected to attend the prestigious Game Developers Conference as Different Games ambassadors. WPI recently became the new home of the Different Games Conference to be held Oct. 12–14, a celebration that brings together those working toward diversity and inclusivity in games and game culture.

“We are creating critical thinkers, not just mindless entertainment,” says Agloro. It’s the immersive nature games, she says, and the process of making choices that make you think about something greater than yourself.

“Everything I do in my work is aimed toward ‘How do we emancipate people? How can we work toward liberation of oppressed people?’ To me, games have the ability to have that impact.”

The joy of playing games is quite different from the work of building them. WPI computer science instructor/lecturer Jeff Kesselman puts it this way: “It’s like teaching filmmaking to somebody who loves movies, who has only ever gone to movies, but has never been behind the camera.” He points out that IMGD majors in the technical track learn to write solid, efficient computer code, and that a number of computer science majors choose to minor in IMGD. “What we do,” he says, “is layer the ‘special sauce’ on top.”

students explore virtual reality and the devices that interface between the human body and the computer. In class they analyze high-end commercial interfaces that make adventure games so exhilarating, and programs like Rock Band so resonant. Then they design and craft their own. They learn basic electronics skills, draw circuity diagrams for their concepts, and use a protoboarding system to assemble their gadgets. Their dreams are made of $10 microcontrollers and plywood—or even a cardboard box as housing.

“Not everyone gets to the point of a durable, solder-wired product,” he says, and that’s fine with him. “They get a B just for getting it working.”

Teams have produced a self-contained sonar sweep module, and an interactive screen version of the old pencil-and-paper game Hangman that lets you select letters and draw the gallows.

It’s not enough for developers to know how to use a game engine, Kesselman says. The game industry needs expert software engineers who know how it’s built, and where to look when things go wrong. “If you’re a trucker, you’d better understand the basics of engines,” he says. “On the road, that truck might fail, and you may have to get out of the cab and lift the hood and get it running again—at least enough to get it to a garage.”

He predicts that this crop of students will graduate positioned for an explosion in the VR market, driven by more affordable headsets and other devices. But he tempers that with the wisdom from his 25 years in the industry. “The only reason to do games as a career is because you can’t imagine doing anything else. You wake up in the morning thinking about it. You go to bed thinking about how to do it better.”

While other schools teach game development as a computer science discipline, deWinter points out that WPI’s IMGD program is a joint venture between humanities and arts and computer science. True to the WPI Plan, the curriculum integrates technology, vision, and aesthetics, and also requires students to understand how their technological innovations will affect users. “From the start, we felt very strongly that videogames and interactive media were expressive technologies, and that the human was the center of it. What experience do we want the human to have? And how do we create systems to allow that those experiences? Those are ultimately humanities-based questions.”

Described as “the ultimate social gaming experience,” GeoStage allows you to play tag with your friends, no matter how far away they live. The positions of the other players are translocated to your perspective, making it appear to each player that the activity is taking place at his or her location. The current platform supports two variations: Battle Royale and Assassin.

Read more in the Daily Herd about GeoStage

After a long flight to Raleigh-Durham International Airport, characters with different gender identities and personalities must find a restroom they can comfortably use before their bladders explode. The game blends humor with the difficult scenarios posed by “Bathroom Bills.” Built as a board game, Gotta Go showcased at last summer’s Games for Change Festival in New York City, with a lightning talk by Professor Lee Sheldon on the powerful analog games created by his students.

Palace of the Monarch

Set in a Ming-era palace, with haunting Chinese music, this game brings Chinese history, aesthetics, and design to a U.S. audience. Players follow clues to solve the mystery of what happened at the palace. “But don’t stay too long. The night is not what you want!” the screen cues warn. The VR aspect heightens the sense of an eerie but magical environment.

Developed at WPI’s Osaka, Japan, Project Center, this location-based augmented reality app introduces users to Central Kyoto. Players use their phones to locate and catch runaway creatures known as kyobubou (short for “musical candy.”) By following the music of the hidden creatures—and then playing tunes with them—players can subdue the colorful animals and lead them back to where they belong. Along the way, users learn about different Japanese musical traditions and historical sites in the region.