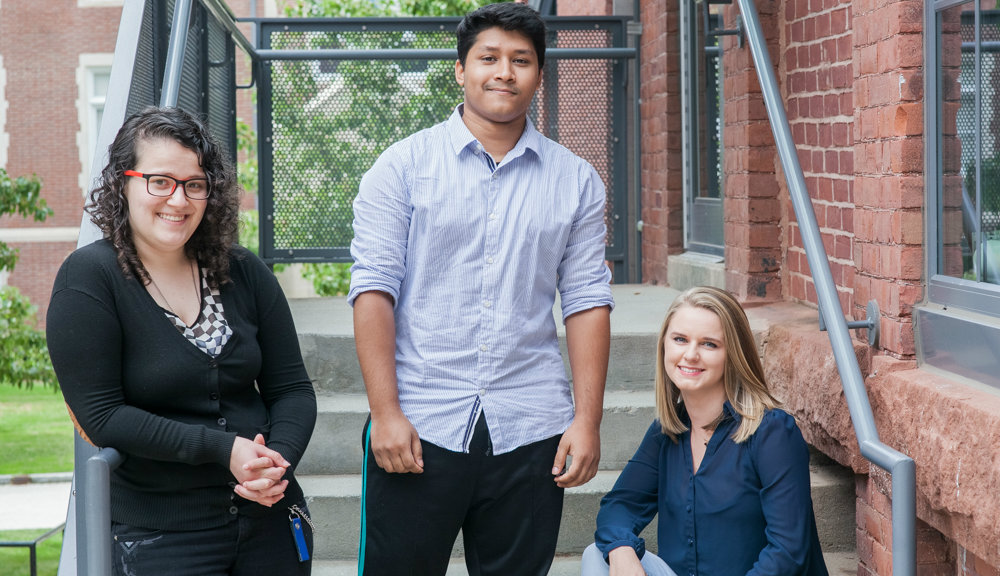 When Katherine Kowalczyk ’19 talks about WPI, she makes one thing entirely clear. Without a scholarship, this biomedical engineering major would not be on the campus she loves so much.

“Getting that scholarship meant the world to me,” she says. “It meant I could go to WPI, my dream school.” So when Kowalczyk and other recipients of the Denise and Arthur T. Katsaros ’69 Global Scholarship had the chance to meet Arthur, who generously established the fund with his wife Denise, at a luncheon in September, the effect was significant for both of them.

Meeting Katsaros thrilled Kowalczyk. “I got to meet the man who helped me come here,” she says. “It makes it more real and makes me love it here even more.”

As for Katsaros, who graduated with a chemical engineering degree before earning his MBA at Lehigh University, meeting the scholarship recipients forged a personal connection. “I had fun listening to them and got to hear their stories and learn about their ambitions,” he says. “It was gratifying, and I am delighted WPI is able to attract such bright students.”

Katsaros, a 2009 recipient of WPI’s Robert H. Goddard Award for Outstanding Professional Achievement, now lives in Florida with his wife. Despite having visited campus countless times for Chemical Engineering Advisory Board and other meetings, he had not seen WPI in session in many years. “The campus was alive with students,” he says of this visit. “It made a huge difference.”

He visited some of his old classrooms and admired newer buildings. “The campus felt both old and new,” he says. “It was incredibly familiar yet different.” The mixed emotions brought home what Katsaros says underscores his desire to give back. “When it was my time to look for schools, I came across WPI and fell in love with it at first sight,” he says. “I liked the size and the focus. All kinds of things clicked. It was like putting on a favorite pair of gloves.”

As an undergrad, Katsaros took in all WPI offered. He played baseball and basketball; he managed football and was a newspaper editor; he was a member of Sigma Phi Epsilon fraternity and Pi Delta Epsilon honor society. “It was a great experience,” he says. “I was lucky enough to participate in great activities on campus. I knew if someday I had the opportunity to give back, I’d like to be able to do that.”

With a decades-long and distinguished career at Air Products and Chemicals, Katsaros says WPI’s influence was direct and beneficial. “Looking back, my years at WPI were formative. The education we received drove the importance of turning the theoretical into the practical.”

For his part, Katsaros wanted his scholarship dollars to help attract great students and support the key experience of studying abroad. Recipients of his scholarships will use the funds to study off campus.

Mechanical engineering major Shamshur Saikat ’18 says he knew WPI was the only place for him. While considering colleges, the Bangladesh native says the Katsaros Global Scholarship made a huge difference for him both in his ability to come to WPI and in his dream of studying abroad.

“I get to go to another country to pursue my education? That’s amazing,” he says. “It all fell into place and now I get to pursue a project off campus.”  Rahman hopes to study in Ecuador or possibly Greece in the future. “I want to go somewhere else. I want to explore,” he says. “Mr. Katsaros made such a difference to me.”

Regina Reynolds ’18 wouldn’t be at WPI without Katsaros’s generosity. “Honestly, the tipping factor for me was the scholarship,” she says. And coming face-to-face with her benefactor was “like meeting a superhero in real life. It was interesting to me that he knows he made a difference, but I don’t think it registered that this is literally life-changing.”

Katsaros says his dreams as an undergrad were not so different from those of today’s students. “These folks want to make a contribution to society just as we did, but today they literally have a world of opportunities open to them and it is so gratifying to see WPI be responsive to those ambitions.”

Katsaros was at WPI during the creation of the WPI Plan and has been following the changes and improvements ever since.

He admires how WPI managed, despite intense cultural and educational  shifts nationwide, to emerge as a stronger focused university.

He says the students in his era had a great campus life and a rich fraternity culture, but now the opportunities for enrichment are even greater—today’s myriad clubs and groups and the added humanities curricula balance the technical classes.

“The core of the Plan remained and became a key part of the educational process at WPI,” he says. “I really appreciate that WPI has done a great job at keeping the focus and improving on it to make the place better. The fact that 70 percent of students get to have an off-campus experience—with a goal of 90 percent—is a great example of that.”