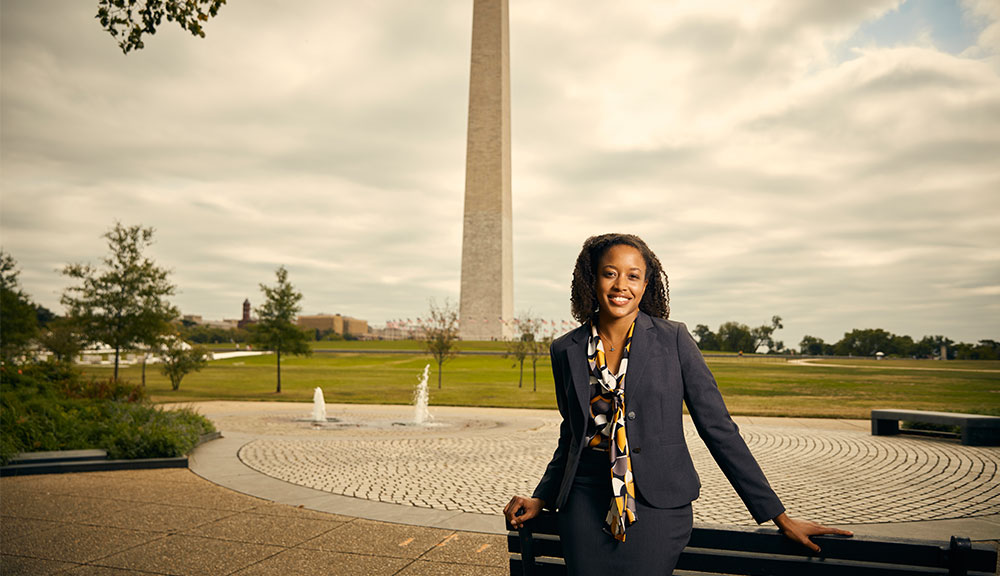 Several nights each week, Melinda Belisle takes the train to a 1.5-acre lot bordering the Fort Totten Metro Station in Washington, D.C. There, the Mamie D. Lee Community Garden teems with a cornucopia of squash, melons, leafy greens, and herbs.

She tends a 625-square-foot patch of earth, taking what she needs and donating some of the bounty—most recently several batches of homemade zucchini pasta—to a local food bank. On a hot and humid night in August, Belisle casts a gimlet eye at her five beefsteak and grape tomato plants. “They’re really struggling,” she laments. “They have early blight.”

Belisle’s tomato tribulations serve as a pointed reminder of her day job. As a science and technology fellow with the U.S. Department of Agriculture, she works in the office that regulates genetically modified organisms, or GMOs, which include engineered plants made to flourish in parts of the world beset by drought, climate change, and pest infestations.

And even, possibly, in a tiny corner of the nation’s capitol.

“If I had a genetically engineered tomato,” Belisle laughs, “I would totally plant an early-blight resistant variety.”

While scorn has been heaped on some agribusinesses’ GMO corporate practices, many scientists—fending off accusations that modified food is unsafe or that modified crops harm the environment—have rallied behind GMOs.

This past June more than 100 Nobel laureates signed a letter to Greenpeace that urged the environmental organization to stop its opposition to a genetically engineered rice variety designed to prevent Vitamin A deficiencies that can cause childhood blindness and death in the world’s poorest countries.

Born in Jamaica and raised in Guyana, Belisle at various points has also called Belize and Panama home. She knows well the deprivations facing underdeveloped countries, and it’s why she’s driven to make a difference in some of the world’s neediest regions. Agriculture, she says, plays no small role in a nation’s well-being.

“I came into my current job a little bit doe-eyed about the way science is used in policymaking,” she admits. “When you think of science, it’s hard, objective facts. In graduate school I learned not to put my own desires on top of that. There’s no moral duty in what your data are telling you. But being here at the USDA and seeing policy get made, there really is a moral value placed on top of it.”

Belisle’s own values were forged in the great outdoors. She grew up in Georgetown, Guyana, the lone metropolis in a South American nation where 80 percent of the land is covered by unspoiled rain forest. She roamed the family’s verdant back yard, often perching on the limbs of a five-finger apple (or star fruit) tree with her beloved cat, Rosemary.

“In the Caribbean, it’s so warm and your parents would kick you out of the house to go play,” she says. “I spent a lot of time just being in nature. I found it very comforting then, and I find it comforting now.

“I’m a very sensitive person, in general,” she adds. “I can pick up on social cues and things in my environment very easily. Living in big cities can be overstimulating. There’s always music and different smells; there are always miscellaneous people walking around. It can be overwhelming. But when I’m in nature, those things kind of fade away. There are stimuli, of course, but it’s just not as intense. I really appreciate that.”

She was 12 when her mother died, after which Belisle, an older sister, and her father (a Methodist minister) moved to Oxford, Mass., in large part to be near American colleges and universities. Her oldest sister was already in the U.S. studying political science at the University of Pittsburgh.

The culture shock was immediate, and, at times, humorous. “I remember that a friend had to show me how to use a vending machine,” she says.

She took refuge in her high school studies, and running track when she wasn’t “drowning” herself in academics. She always did well in math and physics, “but ultimately,” she says, “it was the pull of nature and the environment that won out over the other sciences.”

With graduation looming, Belisle had to settle on a college. Her mind was made up: she’d enroll at the University of Hawaii, lured by the islands’ “super exciting” biological diversity. She ultimately demurred and enrolled at WPI to be closer to family. It was a fortuitous choice.

“I loved it so much,” she says. “I wouldn’t trade it for the world. WPI  was where I flourished.” She praises the university’s “good sense of community,” its project-based learning, and the ready access students have to professors.

Just before the start of her first year, Belisle took part in WPI’s Excellence in Mathematics and Science Engineering Program (EMSEP). Now known as Connections, the program is designed to help acclimate minority students to college life. “It was a very welcoming and supportive group,” she says. “It helped me a lot.”

As a biology major, she wasted little time making her presence felt on campus. She was a member of the Student Government Association, performed with the WPI Dance Team, and helped launch the campus chapter of Alpha Xi Delta sorority, which she served as president. “It took over my life,” she says.

Belinda Barbagallo ’07 met Belisle when the pair worked at the Campus Center information desk. They helped charter the sorority, along with a third classmate, Linda Papaargjir ’08. The trio soon became known as “The Three Lindas.”

“We’d go to networking events and, quite often, people thought we were messing with them,” says Barbagallo, now a biology lecturer and researcher at Brandeis University.

The two, who remain close friends, did research assignments together and bonded over “weeks of failed experiments and dealing with the expectations of our professors.”

Belisle, according to Barbagallo, has one particularly enviable aptitude. “You can put her in a room with anybody,” she explains, “and she will get them to share what they’re doing. That’s helpful for the work she’s doing—she has to talk with scientists, politicians, and everyday people. There aren’t too many scientists who can work comfortably in so many different environments. Melinda is a rare person to come across.”

The talent serves Belisle well in her current role. In 2015 she traveled to Paris for a meeting of the Organization for Economic Cooperation Development, a group that was formed after World War II to help prevent another world war while also facilitating trade. She is part of a team writing a consensus document that “harmonizes” regulatory oversight in biotechnology among participating countries. Such papers are used to weigh the risks between modified and unmodified plants. The papers frequently are consulted by bureaucrats and agriculture ministers.

GMOs aren’t without controversy. “I think it’s definitely up for discussion,” Belisle says. “You can have arguments on either side.” More than half of the European Union’s 28 member nations ban the cultivation of genetically modified foods, in part because of concerns about their safety.

In the United States, meanwhile, more than 90 percent of soybean and corn crops are genetically engineered. Supporters say GMOs reduce the need for harmful pesticides, while detractors say they’ve expanded the use of herbicides, which can kill non-crop plants like the milkweed that monarch butterflies consume during their annual migration.

“I think for a lot of people, the corporate practices are what really upsets them,” Belisle says. “You’re going from farmers being able to save their seeds from year to year, but now those seeds are patented, so they have to buy them again. What does that mean, especially for farmers who can’t afford it? That’s a big part of the conversation, but I think the attacks on safety may be more unjustified.”

Some major benefactors have cast their lot with GMOs. The Bill & Melinda Gates Foundation, for example, is leading a fight to further develop and evaluate genetically modified golden rice, a variety enriched with beta carotene, a source of Vitamin A. Other crops (including corn, eggplant, casaba, and bananas) are being genetically modified for people in the developing world.

For her part, Belisle serves as a gatekeeper. “We try to evaluate whether the things that companies would like to plant—or move interstate or import or export—are safe,” she says. “Is it safe for the environment and is it safe for agriculture? Our partners at the FDA and EPA focus on whether there are pesticide use issues or whether it’s safe for human consumption and feed.”

Sally McCammon, a science advisor for the USDA, says Belisle has a knack for analyzing and processing complex information.

“This allows her to take on and deliver upon a variety of intellectual challenges,” McCammon says. “With her extensive scientific training, she is able to distinguish the important aspects of a problem and organize them into discreet and addressable components.”

These were skills Belisle nurtured at WPI. During her senior year, she spent six months at the Arkansas Biosciences Institute working on her MQP, “Researching a Novel Pathway to Vitamin C Synthesis.” Increasing Vitamin C levels in crops can create more nutritious foods and result in higher crop yields, she notes.

Leading the research was Argelia Lorence, professor of metabolic engineering at Arkansas State University. But Belisle didn’t just benefit from her mentor’s scientific acumen. Lorence was born and raised in Mexico City; she was a real-life example of what Belisle could accomplish.

While women are often subject to gender bias in STEM fields, the problems are worse among women of color, according to research by the University of California Hastings College of Law. One hundred percent of racial minorities (compared to 93 percent of white women) surveyed said they have experienced gender bias.

Before Belisle enrolled at Stanford to pursue her doctorate in ecology and evolutionary biology, Lorence, who says she encountered biases during her own journey, imparted some advice to her young charge: “I told her to work with someone who’s going to be a good, nurturing mentor, one who’ll help you get to where you want to be.”

Lorence did her part, writing a letter of recommendation for Belisle, who won a graduate research fellowship in 2011 from the National Science Foundation. Lorence calls her protégé bright and committed. Moreover, she was struck by one particular skill.

“Something that is unusual is how well she wrote, even back then,” Lorence says. “That’s not easy to find in an undergraduate.”

While still a student at WPI, Belisle worked at Pepperdine University in California, where she studied the ability of various plants to withstand drought. After graduating from WPI, she served research stints with the Environmental Defense Fund’s Oceans Program.

Belisle already has her eyes on the future. She’ll complete her USDA fellowship (which is sponsored by the American Association for the Advancement of Science) in September 2017, after which she will consider going to work for a nonprofit organization in the international sector—possibly in the area of agricultural biotechnology.

“I wouldn’t put it past myself to start my own biotech company in the future,” she says. “My work is having an impact on lives, and I can see it happening in real time. I’m just really interested in new kinds of technology and agriculture and how those can be applied to help people.” Including, perhaps, solving the mystery of a blight-free tomato. 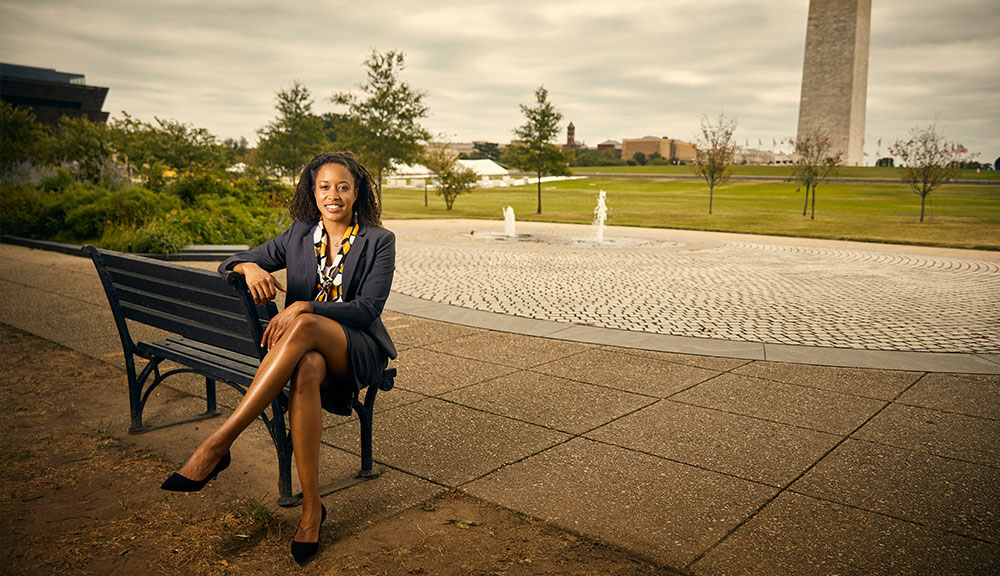 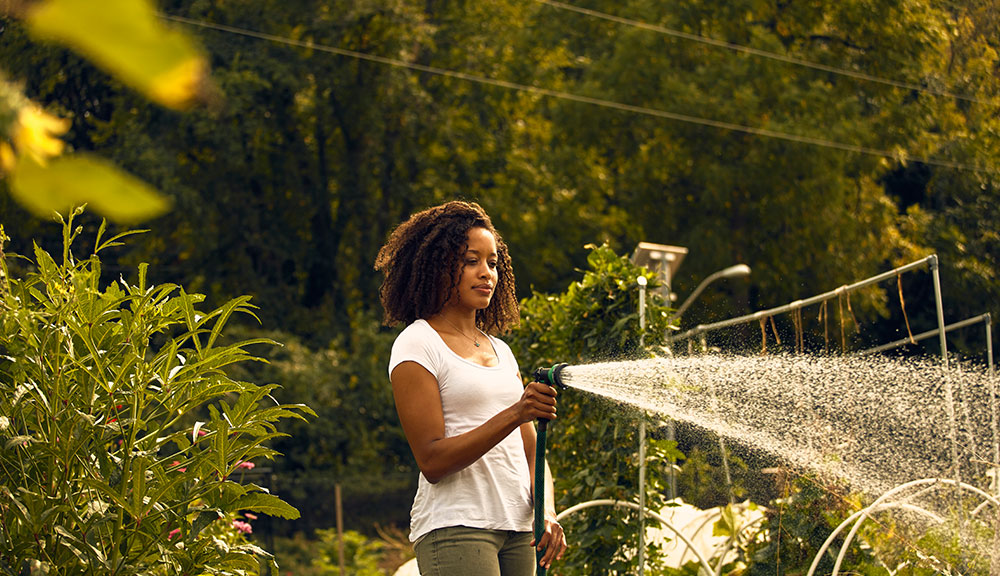 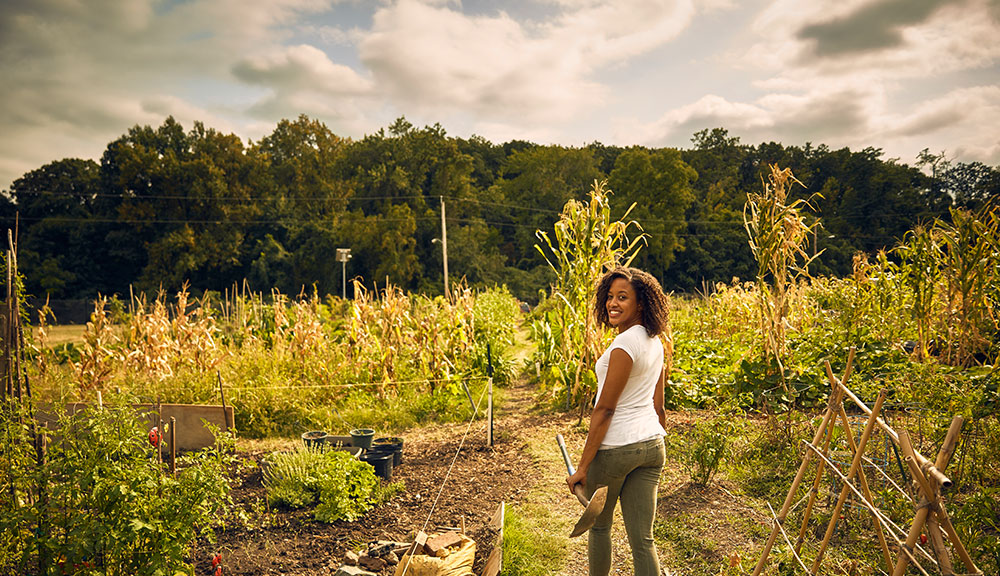 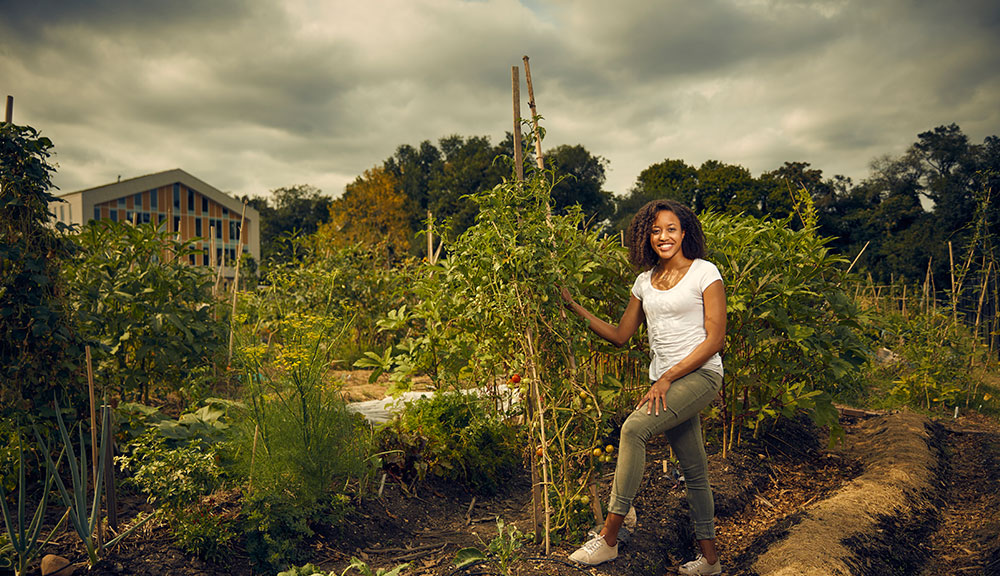 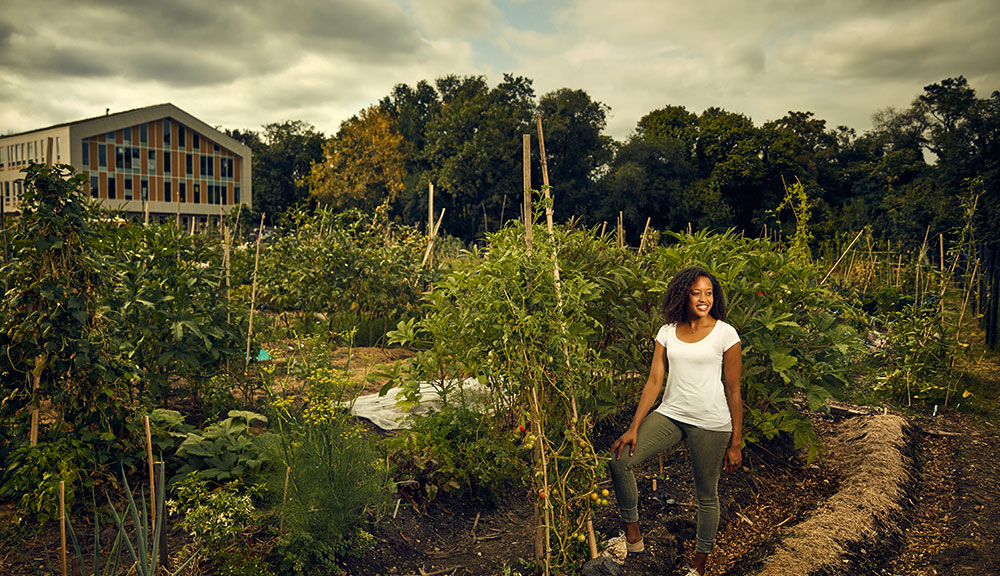 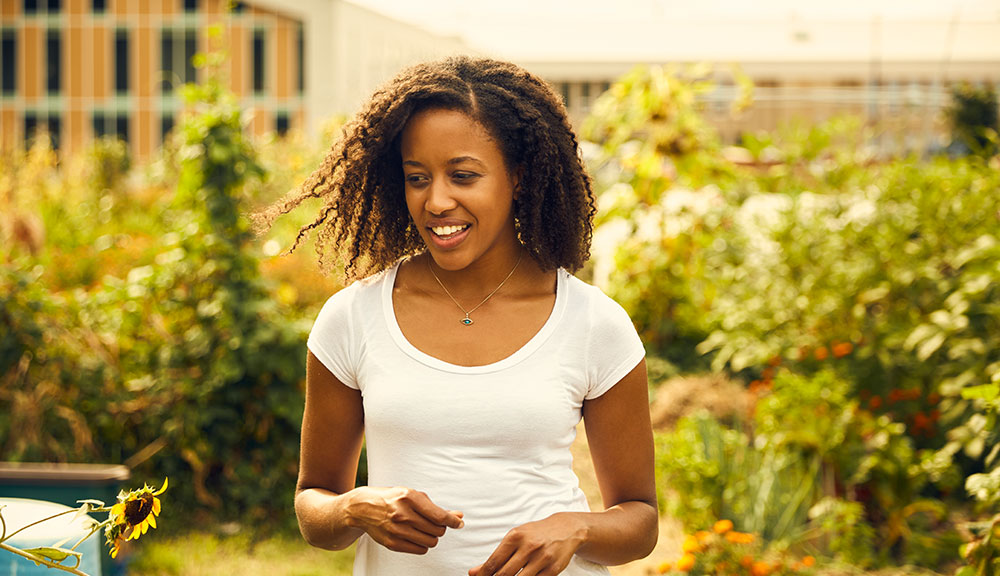