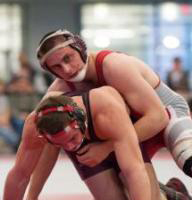 Junior Zach Hartzell (Gettysburg, PA) became the first WPI wrestler to compete at the NCAA Division III National Championships since 2004, wrestling at the event hosted by Cornell College in Mt. Vernon, Iowa. The 174-pounder dropped his two matches at the event to finish his outstanding season with a 16-9 record.

Hartzell was just one of four wrestlers in his class randomly drawn to wrestle in the preliminary round where he was defeated 12-3 by fourth-seeded Kevin O’Brien of Wisconsin LaCrosse.    The junior was forced into the consolation bracket and saw his national championship stay end by Josh Kohler of Augsburg 9-4.

To earn an individual Scholar All-American honors, a student-athlete must carry at least a 3.2 cumulative grade point average, qualify for nationals, or place in your NCAA Regional and/or have at least a 67 percent winning percentage.  Tilbe finished his season with a 25-9 record, including a pair of victories at the NCAA Division III Northeast Regionals hosted by WPI.