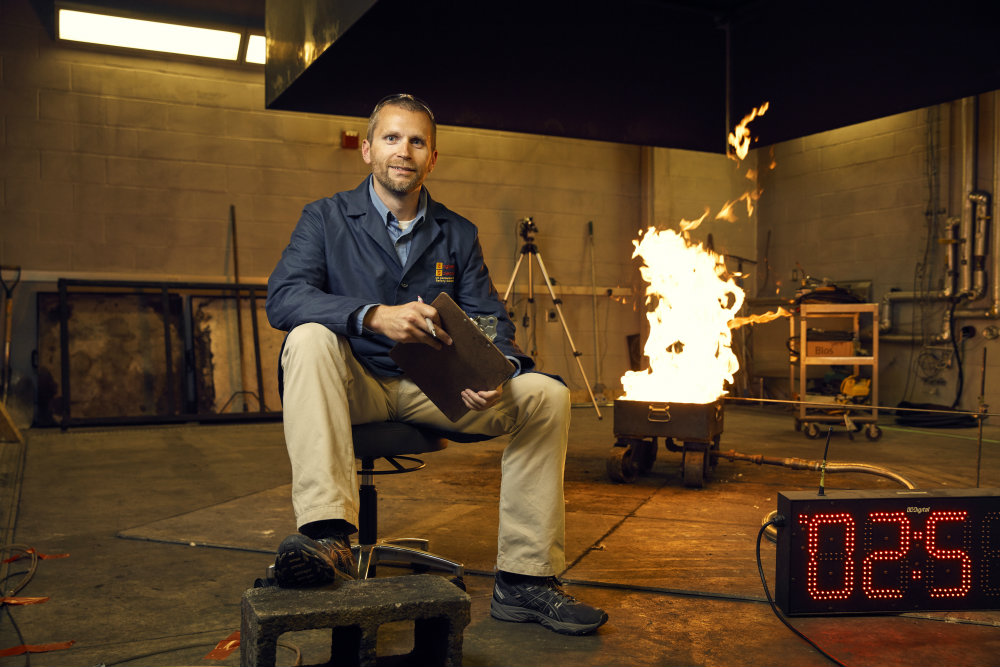 His work has always focused on protecting people from flames.

Early in his career in the private sector, Scott Ayers sought better ways to safeguard the Navy’s newest supercarrier from fire. Later, he earned four patents for his innovative work miniaturizing fire suppression components during the design phase of what would become the world’s largest jumbo jet, shrinking crucial sensors into a package small enough to fit inside the engines they protect.

But now, as a manager in the federal Consumer Product Safety Commission (CPSC), Ayers is devising rules for the safe operation of open-flame, fuel-filled devices used at home by ordinary people. In addition to collaborating with industry and safety groups, he works directly with consumers whose children have been harmed by some of the devices under his portfolio—such as alcohol-burning patio fire pots. That face-to-face contact has given his life’s work its clearest sense of meaning, and mission.

The CPSC has an ambitious agenda. Backed by a $125 million dollar budget, its charge is to protect American consumers against injury and property damage from consumer products. Virtually every product bought, sold, and used in this country falls under its purview.

It’s a tall order, but Ayers describes the work he does in his own corner of the CPSC as the most satisfying professional experience of his career. Working directly with consumers to reduce the incidence of burns, he’s moved out from behind the scenes, and he can now put names and faces on his life’s work.

Ayers’s career, like many fires, began with a spark. As a high school senior in his hometown of Plymouth, Mass., he received a flier describing WPI’s fire protection engineering program. “I was already leaning in WPI’s direction, so this interested me,” he says.

A work-study job doing data entry and other mundane tasks for FPE associate professor Jonathan Barnett gave Ayers his first taste of the field. “It was all a process,” he recalls. “And that was a really big step in the process. It was busywork, but the kind that allows you to see the expanse of a profession even while orbiting its outermost reaches.”

Barnett eventually became his advisor and helped him settle on mechanical engineering as his undergraduate major. [FPE, then a graduate program within ME, did not become an academic department until 2005.] By his sophomore year he was working as a technician in the department’s fire science lab and already on course for graduate work in FPE. “Working in that lab is where it all came together,” Ayers says. He quickly developed a fascination with fire: how it worked, how it could be controlled, and—most important—how it could be stopped.

“For a while, I told people I was a professional pyromaniac,” he quips about these formative years. “I frankly enjoyed working with fire in the lab and the insights it gave me. I liked this idea that we were playing with fire, but also trying to make the world a safer place.”

After completing his master’s in FPE, he accepted a position researching fire suppression systems for the U.S. Naval Research Laboratory (NRL).

As would prove true at several points in his career, Ayers began his new job at a time of significant change in the industry. Designers were looking for a new “clean agent” for fire suppression systems (the National Fire Protection Agency describes clean agents as electrically non-conducting gases that extinguish fires by interrupting the process of combustion while leaving no residue). Halon, long the tried-and-true clean agent, was a CFC (chlorofluorocarbon) whose production was halted in 1994 due to environmental concerns.

Eventually, alternative agents were developed, and Ayers worked with a team for three years helping design systems for massive ship projects like the supercarrier USS Ronald Reagan. It was fascinating work, he says, but, as a contract worker, he never intended to make the NRL a permanent home. 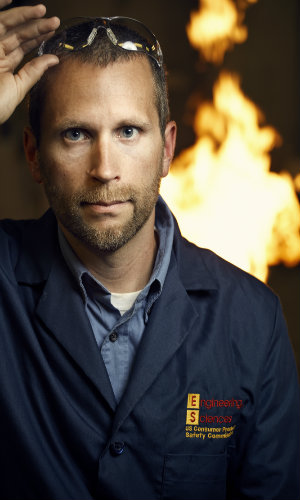 He then spent 18 months performing fire suppression R&D on buildings for a company in Wisconsin before landing at Kidde Aerospace & Defense in North Carolina. Battling the limitations of weight and space demanded of engineers working on aircraft fire suppression systems presented the greatest design challenge he’d yet faced. “Weight and space are always at a premium,” he says.

Ayers discovered that he loved the challenge of engineering large, complex systems into small packages. One project, in particular, designing a system to extinguish engine fires on a new model jumbo jet—one of the largest and most complex commercial aircraft ever built—stretched him in new ways.

That stretching resulted in four patents, including one for an analyzer that ensures that a sufficient concentration of clean agent is injected into an engine in the event of a fire. Although his design didn’t make it into the finished airplane, it did pass muster with the Federal Aviation Administration.

When Ayers left the aerospace industry for his current job with the CPSC, he initially saw his move to the public sector mainly as a way to achieve some work-life balance. Coaching his daughter’s soccer team, serving as president of the local PTO—these were desirable perks of his new line of work. He felt it was a trade-off between the professional rewards of his aerospace work and his desire for a more family-friendly schedule. But he wondered if his best work was behind him.

At the CPSC, he began working on the safety of propane appliances (outdoor grills, for example) —a role that soon expanded to include fireplaces, fire pots, and other flame sources. The work, he says, involves studying “products that are purposely on fire, to ensure that the fires don’t get out of hand.”

At a gut level, Ayers knew his work was important even though he couldn’t exactly define how, at least not in ways that were readily apparent to a layperson.

“A firefighter enters a building, extinguishes the fire, rescues some people, or prevents a burning building from destroying the house next to it—it’s easy to recognize the result of that work,” he says. “You’re making a difference, and you see that happening right in  front of you.”

With fire protection engineers, it’s sometimes hard to see the worth in work whose ultimate and best expression is in what doesn’t happen, he says. Firefighters might appreciate that a small fire didn’t become a conflagration thanks to a well-designed sprinkler system, but that’s the respect one artist  has for another. It’s not something a layperson might consider.

Seeking to reduce one source of potential harm, Ayers initiated a CSPC program that brings parents of children injured in fire pot accidents into the process. Working with the manufacturers, they are looking for ways to ensure such incidents never happen again.

For his part, Ayers is astounded by these mothers’ resolve.

He takes great pains to ensure that this work is done with utter transparency. Meetings are open to the public (citizens who can’t be there in person may join in electronically), and manufacturers and industry groups are welcomed to the table. Ayers says this openness has made the process more collaborative and cooperative.

He is careful to stress that when it comes to product safety, there are no sides. “Everyone is a stakeholder and should be involved.”

For the first time, he says, he was able to look into the faces of accident victims and their mothers and speak a truth he’d always known about his work but hadn’t been able to see so clearly. The truth is, each day that Scott Ayers goes to work, he has a chance to lower the odds that an accident will scar another child.

“I wasn’t able to help these mothers’ kids, but they know what I’m trying to do, and to see the look in their eyes, and see the satisfaction they clearly get from my wanting to do my job,” Ayers says, before pausing. “It was a huge mental boost for me. I finally get to put a face to the job. It’s been the most rewarding aspect of my professional career.”