A Hope for Huntington’s

Sarah Hernandez ’15 (PhD) hunts for a cure with a personal vendetta.

Huntington’s disease is a neurodegenerative disorder that strikes people during the prime of their lives, causing personality changes, memory loss, impaired judgment, problems with movement, speech, and swallowing—and, ultimately, death. There is no cure and no treatment that slows the progress of the disease. It has long been known that Huntington’s runs in families. In 1993 scientists discovered that it is linked to a single dominant gene, which each child of a sufferer has a 50 percent chance of inheriting, and which always leads to a fatal outcome.

“When I was a kid, there were conversations that were kept away from the children, but Huntington’s kept coming up, and I didn’t know what it was — and this was before you could just Google things,” says Sarah

Hernandez, who watched two of her uncles suffer from Huntington’s when she was a teenager. “But then, in a biology class in high school, there was this little blurb in a textbook—literally one paragraph about what Huntington’s is. That’s when I became obsessed with understanding what the implications were and learning more about it.”

Huntington’s killed her maternal grandmother before Hernandez was born, and her uncles would die of it too. Now her 29-year-old cousin has begun experiencing symptoms—a situation made all the more tragic because she has a young daughter. Unable to endure not knowing her own fate, Hernandez underwent genetic testing and learned that she does not carry the gene. But that relief did not diminish her urgent need to know more about the disease that continues to stalk her family. So since high school, she has charted each step in her education and career—from an undergraduate major in biology, to experience as a laboratory technician in industry, to a PhD in biology at WPI, and to her current postdoctoral position in one of the top Huntington’s labs in the United States—with the goal of discovering a cure. “I obviously know a cure can’t come fast enough and that we needed it 40 years ago,” she says. “But I hope, down the road, that what I’m doing now will help get us there.”

Hernandez admits she can’t be sure whether she would have become a scientist if she hadn’t already been obsessed with Huntington’s disease.

“I learned about Huntington’s right around the time you start to define your interests in life,” she says. “So it’s hard to say if I would have been driven toward a scientific career otherwise. I think I would have, because it’s incredibly interesting, especially neuroscience. Everything is new, it’s always changing, and there’s really no limit to what you can discover or to the applications, as long as you’re creative.”

Hernandez grew up in suburban Massachusetts and attended Franklin Pierce College in New Hampshire, where she majored in biology and minored in chemistry. Since she wasn’t sure which approach she wanted to take in the fight against Huntington’s, a broad scientific background made sense—as did a post-college stint in a commercial chemistry lab, where she learned the basics of bench science. Hoping to find the same intimate environment she had enjoyed as an undergraduate, she applied to WPI’s graduate program in biology and biotechnology, winding up in the lab of Tanja Dominko, whose research focuses on the molecular mechanisms behind processes involved in wound healing, tissue regeneration, aging, and cancer.

“That may not sound very linear,” she says, “but having come from working as a chemist, I was new to some techniques in biology, especially cell culture.”

For her dissertation work, Hernandez identified a novel variant of an enzyme found only in certain cancer cells, specifically the devastating brain cancer glioblastoma. From that research emerged a patent for a new cell culture system that could help in the development of screenings to identify precancerous cells—a boon in a field where early detection is often the key to saving lives. She was also named an NSF Integrative Graduate Education and Research Traineeship (IGERT) fellow,  which allowed her to supplement her scientific education with entrepreneurship courses and to spend a summer conducting research at Tsinghua University in Beijing.

“I pretty much say yes to everything—I’m one of those ‘yes’ people,” she says. “I feel like at WPI, if you’re willing to say yes, WPI will present you with life-changing experiences. You just have to be willing to step outside your comfort zone.”

She didn’t speak Mandarin, and she was the only American in her lab, but Hernandez made the most of her time in China, relishing the everyday reality of navigating life in an unfamiliar country. It’s an experience she says served her well as a scientist. “Often, creative problem solving requires making connections between things that aren’t obvious,” she says, referring to research she did at WPI with biomedical engineering professor Glenn Gaudette and current PhD candidate Josh Gershlak. Their project involved using the cellulose network of a spinach leaf as scaffolding for human cardiac cells, effectively transforming the leaf into a miniature heart. A video of blood pulsing uncannily through a translucent leaf went viral and was recently featured on the Netflix program Bill Nye Saves the World.

Even as Hernandez explored cancer and tissue regeneration at WPI, she was keeping up with Huntington’s research, reading the latest breakthrough papers and following the work of the major players. When it came time to seek a postdoctoral position, she quickly realized there would be no better choice than the lab of Leslie Thompson at the University of California, Irvine.

“I was talking with different people in the field of HD research,” she says, and everyone kept saying how great a mentor Leslie was.” Hernandez arranged a visit, and Thompson was so impressed by the younger scientist that she hired her on the spot, without even asking Dominko for a letter of recommendation.

“Leslie later called to apologize,” Dominko says with a laugh. “I said, ‘No, no, you couldn’t have paid me a better compliment!’ And it doesn’t come as a surprise to me—Sarah is the most accomplished graduate student I’ve had in my 13 years here.”

So after graduating from WPI in 2015, Hernandez made the 3,000-mile trek across the United States, where—feeling fully prepared for the challenge—she finally took up the fight against Huntington’s, with a project that focuses on understanding how the extracellular matrix, a network of proteins that supports cells from the outside, is changed in Huntington’s disease.

“We get skin cells from patients, and then we kind of reverse the biological timeline, turning them into what’s called induced pluripotent stem cells—which means they can become any type of cell in the body,” she explains. She coaxes these stem cells into becoming neurons—the cells affected by Huntington’s—and uses them to investigate how the Huntington’s gene interacts with other genes and proteins. The work is funded by a fellowship through the Huntington’s Disease Society of America until 2020, after which Hernandez hopes to continue her research as the head of her own lab.

“Sarah has come up with a very novel way of studying Huntington’s disease,” Thompson says. “She read a lot and proposed an idea, and I think it’s something that really has potential for developing treatments. The extracellular matrix is an up-and-coming area for the neurodegenerative field, and Sarah is really at the forefront of it.”

Hope may be on the horizon for Huntington’s, but the disease remains a devastating reality for the approximately 30,000 current sufferers in the United States, and many more around the world. In addition to her research, Hernandez has also become an advocate, joining the board of the support organization HD-CARE, or Huntington’s Disease Community Advocacy Research and Education, through which she helps to raise funds and organize free symposia to disseminate the latest Huntington’s knowledge to affected families. She is also helping the group to lobby lawmakers about requiring health insurers to cover in vitro fertilization with pre-implantation genetic diagnosis, since screening embryos is currently the only way to prevent Huntington’s. Through this work, she meets many patients and their families—and they in turn motivate her research.

“Of course, there’s my family, but there are people all over the country that are afflicted with this disease, and they give so much,” she says. “These are the people who are contributing the cells that we work with in the lab here at UCI. It helps keep me going, to know how much they look forward to the research. We’re all waiting with bated breath for the cure to come through.” 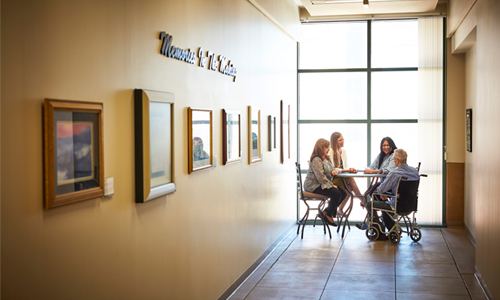 Frances Saldana, president of HD-CARE, along with HD patient Darryn Travis and his wife and caregiver Dina Travis at UCI MIND 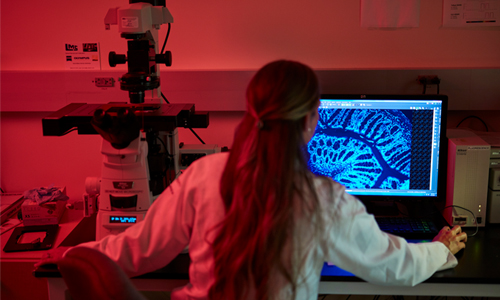 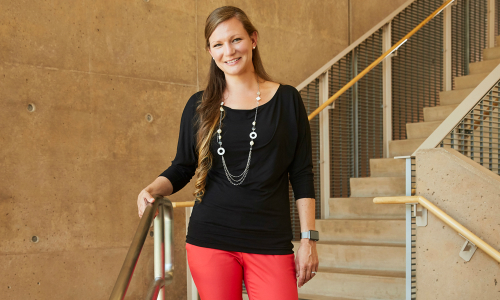 Hernandez at the entrance of UCI’s Biological Sciences III building

One of the pioneering scientists focusing on Huntington’s disease, Leslie Thompson, professor of psychiatry and human behavior at UCI, was among the researchers who discovered the gene responsible for Huntington’s. The 1993 breakthrough allowed for the development of a genetic test 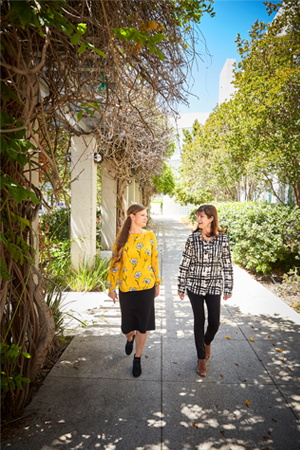 that can tell people if they carry the gene—which means not only that they will suffer from Huntington’s, but that they could pass it onto their children.

Thompson’s more recent research has led to better understanding of how the faulty gene causes abnormal proteins to build up in the brains of patients, and she has experimented with using stem cells to fight it. She also created models of the disease in fruit flies, mice, and human cells that other researchers rely on for their own work.

For Hernandez, the opportunity to work under such a highly respected scientist was the opportunity of a lifetime—although she admits to being a little intimidated at first by Thompson’s “scientific celebrity status.” The mentorship has been crucial as Hernandez conducts her own research—one of several lines of inquiry that Thompson believes show promise in making headway against this cruel disease.

“A better understanding of how Huntington’s works will lead to new treatments,” Thompson says. “There’s definitely hope now for the newly diagnosed, and especially their children.”