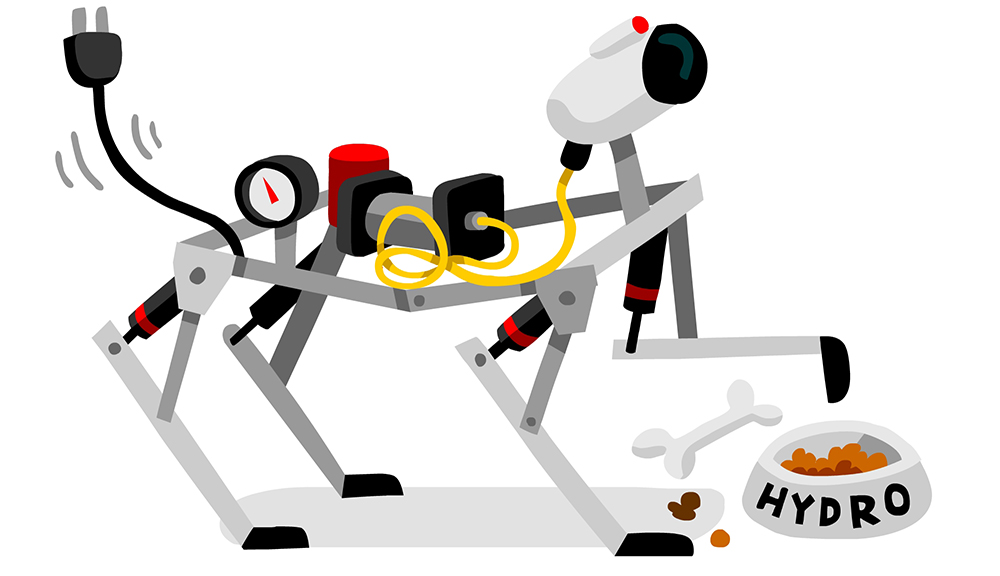 Hydro Dog—a quadruped terrestrial robot actuated by fluidic muscles—is still a puppy. Conceived and raised by WPI students in the laboratory of physics professor Marko Popovic, who pioneered the muscle concept in 2013, the robotic pet was warmly received at the Vecna Robot Sprint and the annual Cambridge Science Festival’s Robot Zoo.

The knee-high metallic canine weighs 35 pounds. It is propelled by a pump that causes water-filled latex tubes to swell and release,

generating energy. With its legs moving in tandem, it can hop or bound on terrain not suitable for wheeled vehicles. Designed as an MQP by 2015 grads Thane Hunt, Andres Leiro, and Daniel Fitzgerald, Hydro Dog features easily reconfigurable aluminum skeletal framing, and makes use of some off-the-shelf components—including a CamelBak® water reservoir normally carried by thirsty hikers.

Hydro Dog had just started walking days before attempting the road race, and it did not complete the 100-meter course. But it was a hit at the Robot Zoo, a kind of petting zoo where robot-loving kids gather to try out technology from around the world. The event attracts tens of thousands of visitors, and Popovic noted with pride that WPI outdrew MIT and Harvard.

Next, several of Popovic’s graduate students, plus a team of MQP undergrads, hope to beef up Hydro Dog with improvements to strength, speed, and dynamic control. With work planned on both the exoskeleton and the exomusculature, the group hopes to create additional “bones” and “muscles” to directly interface with the human body, which could help augment or restore normal limb function. One of Popovic’s pet project ideas is to use Hydro Dog legs to create a “legchair” that would offer great mobility to wheelchair users.