It’s a feeling familiar to any fan of public radio—you might know their voices intimately, but when you see a picture of, say, Renée Montagne, Steve Inskeep, Terry Gross, or Ira Glass, you experience a moment of disorientation. “That’s what he looks like?” you might say to yourself. Or, “I always pictured her taller.”

For Ijeoma Ezeonyebuchi, a quality assurance engineer working on the National Public Radio app at the radio producer’s Washington, D.C., headquarters, that happens all the time.

“Before I worked at NPR, I listened to it on the radio,” she says. “But now I’ll be in an elevator and hear someone’s voice and I’m like, ‘Oh, that voice sounds so familiar.’ And it’s Sam Sanders, or Guy Raz. When you hear a voice on the radio, you don’t really imagine a face—they’re just on that pedestal, as ‘the Voice.’ And you might think, ‘Oh, this person is probably very polished and together, they know everything,’ but when you meet in person, they’re like a regular human being, just a really nice person who knows a lot of interesting stuff.” 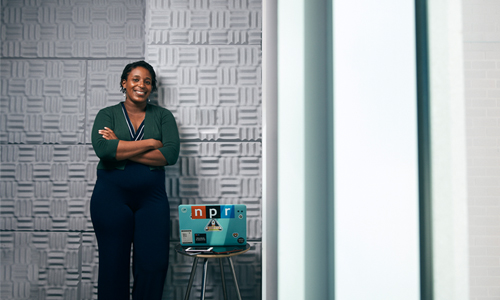 There might be fewer surprises now that Ezeonyebuchi has been at NPR for four years, but every day still holds new experiences for the electrical and computer engineering major, who now finds herself surrounded by top journalists reporting national and international news. (She still thrills, for example, at the appearance of cultural figures like Grammy-winning R&B artist Brandy, who pops in regularly for interviews or concerts.) As a daughter of Nigerian immigrants with a passion for music, and for teaching others to code, it makes sense that she would wind up at a radio station, using her tech skills to help NPR’s 37.8 million listeners make better sense of their world.

“Working on this app, we have to make sure what we’re doing is valuable,” she says. “It can’t be just, ‘Is your app flashy?’ or ‘Does it look nice?’ People are out there using it, and what you do informs the public. It has to help people get the news wherever they are, extend their experiences, and find great stories.”

NPR first released its app in 2009, when smartphones were still fairly new. By 2018, when NPR completed a significant redesign, the app had more than a million monthly users, whose experience needed to be seamless regardless of which phone they were on, which operating system they were using, or which local radio station they wanted to listen to through the app. And that’s where quality assurance comes in.

“I participate in a lot of the early discussions about new features,” Ezeonyebuchi explains. “I ask a lot of questions about how the change might work, how we’ll test it. I think about scenarios that the users are actually going to go through, to make sure we’re accounting for that prior to development. We’re basically trying to plan what the user might do before the feature exists. A lot of times we have a generic idea of what to expect, but not a definite idea.”

There’s a lot an app developer can’t control, she notes, including not only user behavior but how the app interacts with other apps or with the user’s operating system. “A lot of that stuff you don’t discover until you have something working in your hand, to kind of play around with. Our biggest challenge is figuring out—as much as we can—what could go wrong before something even exists. We have to think about all these variables that might come into it, from the manufacturer of someone’s phone to how they’re using it.”

Ezeonyebuchi works with about 10 other engineers, and while hours are flexible and the atmosphere relaxed, they hold themselves accountable to one another with daily “scrum” meetings, where they share updates about what they’ve accomplished, what worked and what didn’t, and what challenges they’re tackling next.

“It’s all very collaborative,” she says. “I might be assigned something that needs input from the editorial team or the design team or the product team. And the quality assurance engineers all sit relatively close together, so we’ll have a lot of ad hoc discussions where we troubleshoot and figure out how to make things work. Everyone is pretty passionate about the work they do here, and there are always opportunities to put two heads together, instead of just putting the responsibility on one person’s shoulders.”

When you hear a voice on the radio, you don’t imagine a face. You might think ‘Oh, this person is probably very polished and they know everything,’ but when you meet in person, they’re just a really nice person who knows a lot of interesting stuff.
Ijeoma Ezeonyebuchi

Working together toward a common goal comes naturally to Ezeonyebuchi, one of six children of a nurse and an IT worker. Like so many immigrants, her parents sacrificed and strove to give their children a good life, and it was simply an expectation that each would do their part by succeeding at school and attending college.

“My parents always imbued in us the idea that if you work hard, you’ll go far,” she says. “I never thought about not going to college. My siblings and I all have our degrees now—I have a sister who does pharmacy, a couple siblings doing business, a brother who did public health, and one of my sisters is going law school. I’m the only one in tech.” 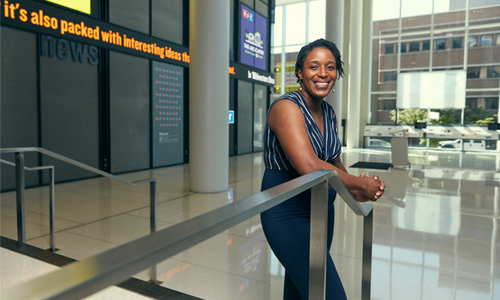 Ezeonyebuchi originally considered majoring in foreign languages or economics, but after she had submitted several college applications, she realized that one of her favorite high school experiences had been participating in a robotics program—and what she really wanted was to study science and technology. “So I had to rethink my plan,” she says. “I had applied to all my other schools, but I needed a technical school.” Serendipitously, an application for WPI arrived in the mail. “I don’t even know how they figured out about me,” she says with a laugh. “But I got a scholarship.”

With her parents’ strong encouragement, she accepted the offer.

“And I was pleased with my choice,” she says. “The academics were hard, but there were so many things I learned at WPI. I was very grateful for the small class sizes—that was an experience a lot of my friends at other colleges didn’t have. They went to big campuses where there was not as much of an opportunity to talk with professors. But at WPI, if I didn’t understand something, I would hit up the professor’s office, and I found that was a really good way to kind of get to know them.”

Pep talks from her MQP advisor, Professor Alexander Emanuel, still help her during tough times. “I had an exam that I just didn’t do that well on one day,” she recalls. “And that was the point I really realized engineering was hard. I was sitting in the hallway, and Professor Emanuel comes by and asks me how it’s going. I was like, ‘Oh, not too well.’ And he said, ‘You know what? You can do it. You can do anything you put your mind to. This is not the greatest challenge you’ll ever face.’ I think the fact that I had professors that were willing to say stuff like that really helped.”

Emanuel and other professors also encouraged her to always be willing to learn new things—a useful attitude, since Ezeonyebuchi was not, at the time, sure what direction her

career would take after graduation. But it was with a spirit of open-mindedness that she approached everything on campus—including serving as a tour guide.

“That’s how I learned how to master walking backwards,” she quips. “Although I’ve never had any other practical use for it!”

But, in all seriousness, she explains that the job pushed her to step outside her comfort zone. “I was always a little bit more introverted, so I felt like it would be a good opportunity for me get better at public speaking. Which did help, I guess, because now I’m speaking at conferences.”

For a woman who once considered herself “reserved,” Ezeonyebuchi spends a surprising amount of time talking to strangers. Last year, for example, she was a “camp counselor” at THAT Conference: Summer Camp for Geeks—where she gave a talk about diversity and inclusion in tech. As a woman of color, an identity doubly underrepresented in the industry, Ezeonyebuchi knows what she’s talking about when she tells conference attendees, “You can’t build for multiple audiences if everyone looks the same.” And diversifying tech is also a goal that drives her to volunteer with the nonprofit Women Who Code, for which she hosts workshops on java programming and mobile development for Android. 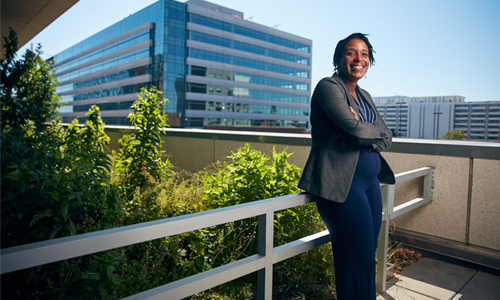 “My involvement started just as a way to keep sharp at skills,” she says. “But after going to a few meet-ups, they asked, ‘Would you be interested in volunteering?’ My first response was, ‘I don’t know anything,’ but I said yes anyway.”

Four years in, she has found that leading coding workshops exposes her to a greater variety of people than she might otherwise encounter.

“You never know who you’re going to get in the door,” she says. “You get to hear people’s stories about coming into the tech scene from a lot of different backgrounds. There was someone who worked at NASA for 15 years and built all these exciting things and just wants to learn something else on the side. I met a woman once who was really interested in building apps for language learning. I’ve seen people who are just out of high school, to women in their forties to fifties. Some are just starting to use computers. And it’s a very valuable thing, to have the opportunity to see people grow.”

Serving as a mentor also has Ezeonyebuchi contemplating her own future. While she enjoys her work at NPR, and she knows she wants to continue volunteering and speaking at conferences, she is also beginning to imagine herself in an academic role, either at the middle school or high school level or in higher education, where she might, one day, pass along some of the advice she got from her WPI mentors.

“I’m still trying to figure it all out,” she says, “but one thing I do know is that I want to inspire the next generation.”