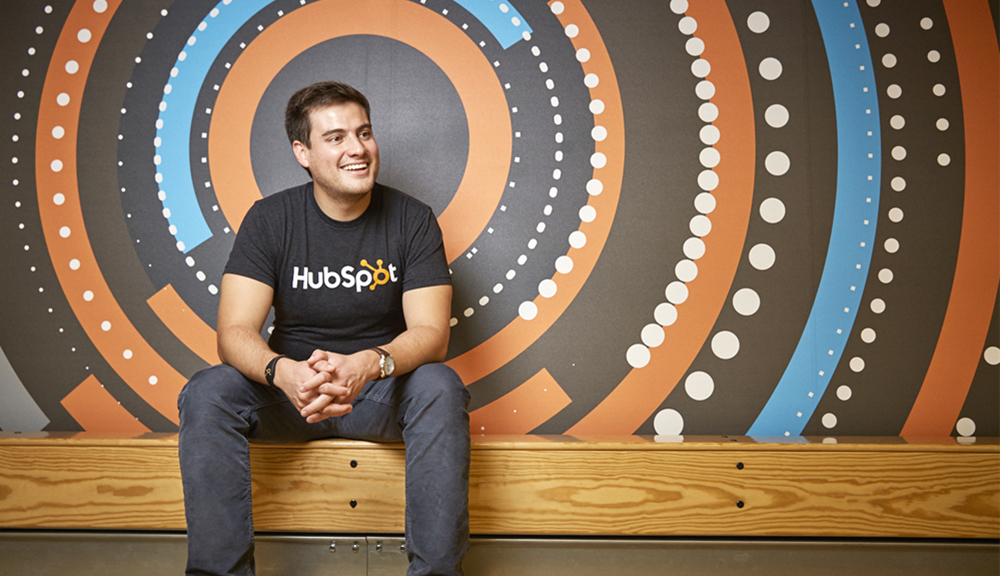 Since signing on as a senior implementation specialist at HubSpot in 2016, José Luis Ortiz has helped businesses throughout Latin America take advantage of the marketing and sales tools the Cambridge-based tech company develops. But there’s one client he’s particularly proud to have worked with.

The official sales representative in Ecuador for a German corporation that makes industrial measurement equipment, Luis Anibal Ortiz had built his business serving major oil companies, and even the water utility, in the capital city of Quito. He didn’t need marketing services, but when he learned about HubSpot’s free customer relationship management (CRM) software, he figured it was worth a try.

“I went to the HubSpot webpage just to inform me where José Luis is working,” the elder Ortiz recalls. “I was surprised to find a free sales CRM that could t to my company. We tried it for a short time, testing the free options offered.” 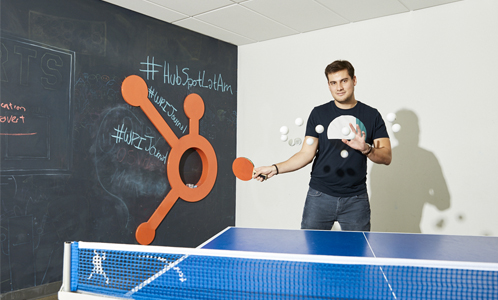 José Luis was excited to learn that his father was using the tool. “Our free CRM is a game changer,” he says. “He implemented it, and he was in love with it. He tested it out for a few months, and then he was, like, ‘Hey, I think I’m ready to buy it. I’m seeing value from this.’”

Soon, his father was a paying HubSpot client, purchasing sales tools that would help his business run more smoothly.

While José Luis works hard to ensure that all the HubSpot clients he works with get the services they need, this business relationship ran deeper, and it helped father and son gain new insights into each other’s professional lives. For the elder Ortiz, who had moved his son into a dorm room in far-off Massachusetts just six years earlier, and the younger, who dreams of returning home to Latin America after finding success in the United States, the deal was a source of deep pride.

“That may have been one of my greatest experiences working with customers,” Ortiz says. “I’m helping my dad’s company—and now he can actually tell people what I do!”

Luis Anibal could be forgiven if he initially had a fuzzy idea of his son’s job. HubSpot’s specialty, known as “inbound marketing,” is a fairly new idea. It was essentially invented with the company’s founding in 2006. It contrasts with traditional “outbound marketing,” or advertising. Whether it’s a banner ad on a website, a poster in a subway station, or even a Super- bowl commercial, outbound marketing sends a company’s message out to the world. Cold-calling and email blasts are similarly directed and, like advertising space, lists of leads and email addresses can be expensive. Inbound marketing, on the other hand, lures clients in. It involves publishing content, including blog posts, videos, and educational articles, or providing free services.

“It focuses on creating quality content,” Ortiz explains, “so that people are attracted to your brand, as opposed to you just trying to reach out to anyone and everyone.”

Inbound marketing offers a less expensive approach, so it appeals to small- and medium-size companies, which make up the bulk of HubSpot’s clientele. Ortiz works on a team that serves the company’s growing Latin American sector, with a portfolio that includes everything from car dealerships and software companies to universities to NGOs.

“There’s a lot of opportunity to revolutionize marketing and sales in Latin America, because they’re still pretty traditional,” he says. “And inbound works well for a wide range of businesses.” 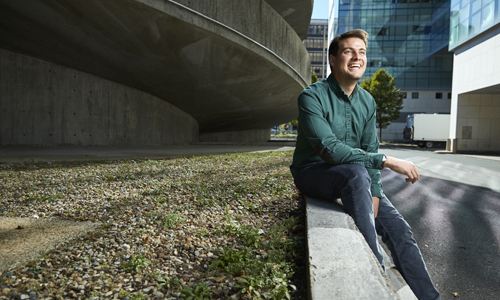 Ortiz’s relationship with clients begins as soon as the HubSpot sales team closes a deal for services, and continues for the first 90 days of a contract. His job is to work one-on-one with clients to put together a plan for how they will use HubSpot’s various tools— including the CRM automated emailing and content creation software.

One recent client, an auto dealership in Mexico, wanted to try a different approach from the hard-sell that car salespeople are often known for.

“Auto dealers in Mexico usually work the same way they do here—someone will drop by,  the dealer will try to sell right away as opposed to helping first,” Ortiz says. “It’s funny, because car dealerships are pretty much the antithesis of inbound marketing. ‘Sell first, I don’t care what you need, or what you think, or even what you are looking for.’ Our sales team for Latin America has seen a lot of opportunity with this type of company, because that [way of selling] is not working anymore.”

Ortiz helped the Mexican dealer create a blog with information about car maintenance—how  to change a tire; how often to replace your oil. Aimed at local drivers, the content was intended to draw in potential car buyers by providing friendly, useful advice. Meanwhile, other HubSpot tools automated the process of contacting people who had given the dealer their email addresses.

“It is something that they hadn’t done before,” Ortiz says. “They were happy with that, and they will do some good things with it in the near future.”

HubSpot recruited Ortiz, who grew up in Ecuador, a country of about 16 million people, in large part because he is bilingual, an ability in demand in the Massachusetts tech industry. But cross- cultural fluency has proved nearly as useful as language skills. Ortiz is often called upon to bridge U.S. tech culture (open offices, casual attitudes, flattened hierarchy) and Latin America’s more formal business code, where relationships and face-to-face conversations are of prime importance.

“They’re completely different worlds—the way they consume information, the way they do marketing, and the way they buy and sell,” he explains. “In Latin America, personal interaction is a lot more valued and a lot more required.” 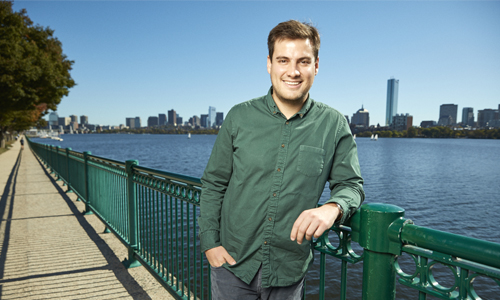 While he has too many far-flung clients to visit them all, Ortiz does his best, traveling to workshops in Mexico and Argentina and scheduling meetings with clients who attend HubSpot’s annual conference, Inbound, in Boston. It’s also essential to turn on the camera when conducting a web- conference with Latin Americans, something he has found people in the United States can be reluctant to do. And of course, the fact that Ortiz is Latin American himself also helps make clients comfortable—especially if they happen to be from Ecuador.

“I’ve had a few big-brand retailers that everyone in Ecuador knows,” Ortiz says. “I’m like, ‘Hey, I’m from Ecuador. I know you guys!’ And they’re like, ‘Oh, that’s so cool!’”

He savors these unexpected connections with the country where he grew up, and where most of his family still lives. The valedictorian of his Quito high school, he had long intended to pursue an education abroad. His original goal was Monterrey Institute of Technology, in Mexico, where his older cousin had studied engineering. He was accepted, but his father encouraged him to apply to some universities in the United States, as well. The U.S. has the best schools in the world, Luis Anibal said.

“So I decided to give it a shot,” says Ortiz.

He applied to a few universities and wound up with a generous scholarship offer from WPI, which sealed the deal.

Aside from a few summertime visits to an aunt in Minnesota, Ortiz had spent little time in the United States before he arrived in Worcester in the fall of 2010. Like many international students, he experienced a touch of culture shock.

“My first week, my parents came with me to help me buy all the stuff I would need,” he says. “When I had to say goodbye to them, I was crying, ‘What am I going to do?’ It was definitely a bit of a struggle. But I think I was lucky enough to get a really good group of friends from the start. There is a huge Latin American population at WPI, and everyone was going through the same thing. We all spoke Spanish, and we came from very similar cultures. That made it all easier.”

Ortiz settled in, and by the time his younger brother was applying to colleges, he liked WPI so much that he could recommend it wholeheartedly. (Sebastian Ortiz graduated in 2016.)

“He was a wonderful student ... professional, dedicated, creative, and our meetings were actually really fun,” says Professor 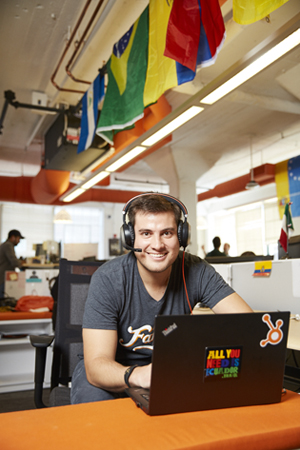 ​Renata Konrad of the Foisie Business School. When she directed Ortiz’s Major Qualifying Project (MQP), which took him to Billerica-based biotech supply manufacturer EMD Millipore, Konrad was particularly impressed by his ability to communicate with different people. “[He and his team] were 20-year-old students discussing process changes with EMD Millipore employees who have been on the shop floor, some of them for over 30 years,” she says. “José did a fantastic job communicating.”

“I remember him as a student who always greeted me with a smile and a big hello,” she says. And although he could have succeeded in industrial engineering, she is not surprised that his career took a different course. “Because IE is focused on systems and the interface between people and the systems—and the technologies that support the systems—it provides a springboard to careers in other areas.”

In Ortiz’s first job after graduation, working as a business analyst for a supply chain IT consulting company based in Andover, Mass., he used many of the skills he learned in his classes. But despite his interest in manufacturing, his real passion is doing his part to help Latin America grow and thrive. While he enjoys his life in the United States—work-life balance is big at HubSpot, and he has plenty of time to travel—he yearns to make what he calls “a successful return.” Initially, perhaps, he may be part of a potential HubSpot satellite office.

“But in the long term—not even long term ... medium term,” he says, “I definitely want to start my own business down there. The actual concepts and theorems are probably not that helpful, because I’m not doing anything related to them, but I don’t think you go to class for that. You go to class to shape your work ethic, and the way you work is different at WPI. So I pretty much hit the ground running when I got out!”

Whatever lies in store, Ortiz is confident that WPI has prepared him well for it.