“Beautiful” may not be the first word that springs to mind when envisioning an M1 Abrams tank—the Army’s most awesome and lethal combat vehicle, with a massive 120mm cannon and machine gun. But what other machine has the ability to function in such an intense variety of climates and terrain around the world, in situations that can literally mean life or death for its occupants?

She should know. As an operations research master analyst for the U.S. Army, it’s her job to do the rigorous research and testing to ensure that weapons such as the Abrams tank are able to both attack and defend. “They are, of course, killing machines, but at the same time, it’s incredible how all the things they’re able to do do indeed protect the people inside,” she says.

Forsythe works for the U.S. Army Futures Command Combat Capabilities Development Command Data and Analysis Center, which supports equipment—including new ammunition and firing systems—to ensure that soldiers can perform with them in battle. 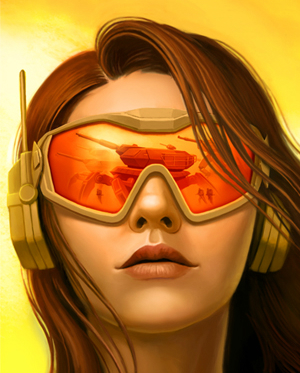 Her job consists of both rigorous computer modeling and supporting on-site testing at the firing range—which can mean making hard choices on the job. “Every time you turn on the tank, it costs hundreds of dollars per hour just in the amount of gas you’re using,” she says. “Every round you want to fire costs thousands of dollars.” While she is often working under the constraints of a taxpayer-financed budget, Forsythe fights hard for the tests she feels are necessary to achieve confidence, thinking of the soldiers whose lives are literally on the line in the decisions she makes behind her computer screen. “The tankers inspire me,” she says. “You want to do your best to give the soldiers on the front lines all they need to succeed.”

A self-described “military brat,” Forsythe comes from a line of military veterans; her father and uncles served in the Air Force and Marines, respectively, and her grandfather served in both the Air Force and the Army. Even after leaving active duty, her father continued to work as a contractor for the Department of Defense, and so the family was always shuttling between military bases—in Nebraska, Ohio, Virginia, Oklahoma, and Alabama. While proud of her family’s service, Forsythe did not assume she’d go into the military herself; she was interested in biology and engineering instead.

Entering WPI with a full scholarship to study biomedical engineering, however, she thought that perhaps she could combine that with military service—for example, by researching artificial limbs to help amputees. She applied for and received an ROTC scholarship, waking up five days a week for physical training and classes. “Every single day I got up at 6 a.m. to French braid my hair,” she says. “I was one of the few people who used all 21 meals of my meal plan, because I was always up for breakfast.”

She excelled at WPI—thrilled, even, to attend such basic engineering classes as Statics and Dynamics of Mechanical Engineering with Professor Ray Hagglund. “For something with the same equations over and over, it was exceptionally engaging,” she says. “He really made it come alive.”

At the same time, she took physiology classes where she was implanting simple medical devices and materials into mice. Her IQP (Interactive Qualifying Project) took a decidedly military bent with a trip to Venice, where she worked with interdisciplinary and global studies professor Fabio Carrera to help design a database to catalog the arms and armaments collection of the Doge’s Palace, which dates back centuries. As a bonus, she got a rare opportunity to go to the roof of the palace and watch the festivities for the Festa del Redentore, which celebrates the end of a 16th century plague. “It was, honestly, the best fireworks display I have ever seen,” she says.

For her MQP (Major Qualifying Project), Forsythe followed her medical interests to develop a surgical device that would input a polymer into the nervous system. “It was like the opposite of Jell-O,” she says. “It was liquid at room temperature, and then when you inject it into the body at 98.6 degrees it becomes a solid.” Such a device might help create a scaffolding for stem cells to repair a spinal cord injury. For her project, Forsythe experimented with different structures, sizes, and angles for the device to optimize its performance.

That combination of military and medical projects would serve her well when she graduated from WPI and joined the Army as an active duty preventive medical officer in May 2001. After the 9/11 terrorist attacks, however, her work took a dramatically different turn. “I can remember looking at the faces of these young people who had just joined the Army and realizing that everything in your life could suddenly change,” she says. She exhibited pride and purpose in the fact that she was in a position to actually do something in response to the attacks.

For much of the next four years, she worked at projects to counter the negative health effects of weapons of mass destruction, including chemical and biological weapons. In addition to researching hazardous materials and analyzing contaminated soil and air samples, Forsythe worked on responses to protect soldiers, including selecting respirators specifically for WMDs, considering all the factors that could influence their survival. “What if they are under stress? What if they are having to run? You have to think very methodically— like an engineer—to walk through all the steps,” she says.

Though she didn’t serve in Iraq or Afghanistan, she did go to Honduras for a six-month posting. “It was by far one of the most transformational experiences of my life,” she says. While her main mission was to ensure that soldiers and embassy staff didn’t contract communicable diseases, she also confronted a host of other challenges—from safety concerns over the country’s high rates of violence to the extreme poverty facing the people there.

Then there was the climate itself. “It was just ungodly hot and humid—it was a true jungle,” she says. Dealing with those challenges in the remote locations where she did her work gave her a new appreciation for the difficulties soldiers face around the world. “A fair amount of being in the Army is understanding what the rest of the world actually looks like,” she says. “It helps me for what I’m doing now to be able to envision how the Army systems can be deployed in different environments—and how much the environment can screw up your stuff.”

After she completed her stint of active duty, Forsythe worked for a military contractor for seven years, continuing to engineer weapons of mass destruction. She returned to the Army in 2012 to work on ground combat systems, including the Bradley and Stryker fighting vehicles— especially the Abrams tank—and was recently promoted to her current position.

The Abrams M1 was first introduced in 1980, and its basic structure has stayed the same; but in order to keep up with the demands of modern combat, it has been through dozens of revamps—the second generation M1A2 deploying in 1992, and several new System Equipment Packages released since. It’s the job of analysts like herself to ensure that each new upgrade continues to perform on the battlefield.

Forsythe primarily looks at lethality—whether a new piece of equipment will do what it needs to take out an opponent. Much of her work consists of supporting “force-on-force modeling”— simulated war games that test a component in real-world conditions. It’s one thing to test a new laser rangefinder to make sure it accurately hits a target … it’s another to integrate it into an actual combat situation.

This means testing it for all four moving positions, and that’s where the math equations Forsythe learned at WPI come in. Considering the tremendous cost of military testing, she is able to use computer models to shortcut tests while reserving the field tests for those that count. In making those calculations, she is constantly weighing the accuracy of tests versus cost. “You might want an 80- to 90-percent confidence interval or, if lesser, you might employ it differently.”

A recent project, “Fleet Zero,” helped conserve resources while making testing more effective. Anyone who has ever fired a weapon is familiar with the idea of “zeroing”—adjusting the scope to account for a weapon’s particular geometry so it can fire accurately over long distances. Zeroing out every tank in a fleet is a time-consuming and expensive process, requiring firing dozens of rounds. Decades ago military analysts determined that wasn’t necessary; coming up with an average setting for a fleet, and adjusting everyone’s weapons to that setting was just as precise on the whole. “It gives you almost the same answer,” she says.

When that longstanding idea was recently questioned, however, she went back to some of the analysts who developed it (many of whom used to be tankers themselves) to repeat the analysis, and convinced the Army to recommit to the practice.

In another project, Forsythe helped determine that the probability of a tank’s making an accurate hit on its first round could be improved by adding in a correction for the Coriolis effect (a force caused by the rotation of the earth that slightly skews objects in motion) in accordance with the latitude of the weapon’s location. While that phenomenon was known, she says, it took some convincing to have it made part of official practices. “The Army is a wall of red tape sometimes,” she says. “Sometimes you have to find the right people to actually change something in the system.”

Getting things done can sometimes be complicated by the fact that Forsythe is a rare woman in two professions—military and engineering— dominated by men. “I was the only girl in my AP physics class, and I’ve been one of a few for quite some time,” she says. Sometimes having people underestimate her can be an advantage, she says; other times, it can be an impediment, causing her to work twice as hard to have her research accepted.

Since her recent promotion, she has redoubled her efforts to be a mentor to other women in the military, helping them overcome the obstacles she has faced herself.

“Whenever I see younger interns or junior engineers, I offer to show them whatever ropes I can to help them understand where they are, who they should talk to—and who they shouldn’t talk to,” she says. “I was very blessed with this recent job promotion, and hope that more people can move up as well.”

As for her own work, Forsythe attributes much of her success to the leadership training she’s received from the Army itself. “Leadership is the art of influence, and that doesn’t matter whether you are male or female,” she says. “It matters how much you are able to understand what motivates another person.” At the end of the day, people want the truth, she says, and if they don’t accept her proof because she is a woman, she can use other strategies to present her findings.

“Maybe if I give them a chance to blow off steam, and then go back and talk with them separately and privately, there’ll be ways to work around it,” she says. On the other hand, she’s had to learn that sometimes prejudice is too strong to convert someone. “I have to understand when it’s okay to be, like, ‘All right, that one’s not moving. That’s a rock I’ve got to climb around.’”

With all the competing pressures of the job, Forsythe has had to learn to pick her battles and defer to others on decisions at times, even when she might not agree with them. But she has her own bottom line—the safety and well-being of those who will be riding in the tanks she helps design. “If it’s not going to impact the tanker a tremendous amount, then you try, but sometimes you have to let something slide,” she says. On the other hand, “if something is going to impact the tanker, you argue for it as much as you can.”