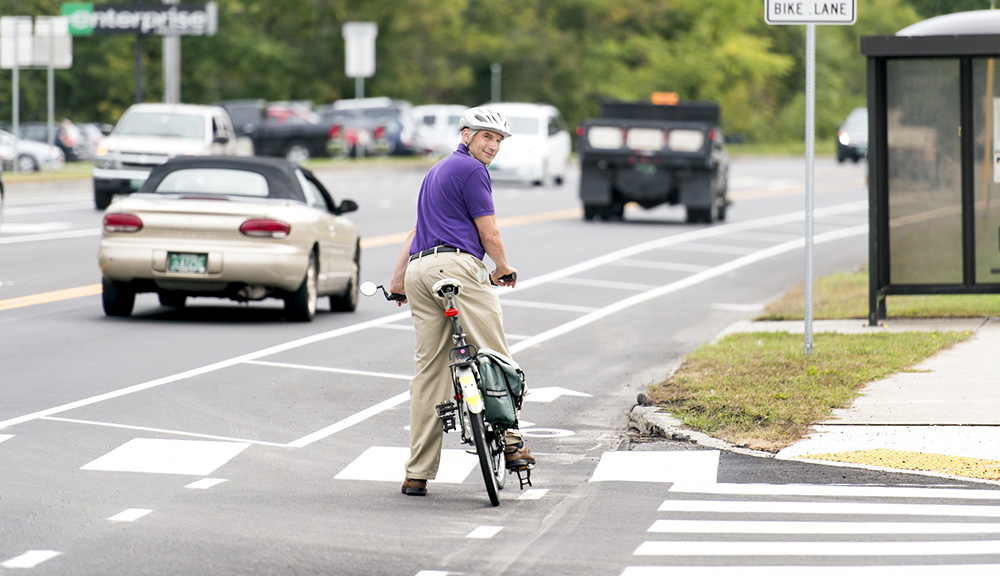 A two-lane highway in most sections, U.S. 302 follows a series of rivers—the Jail Branch, the Winooski, the Presumpscot—from Vermont’s capital of Montpelier, 171 miles east to Portland, Maine. This area of northern New England, known for forested peaks, pristine lakes, and quaint villages, also has its share of less-than-bucolic spots. One is the stretch of 302 from the town of Berlin to the historic city of Barre.

The four-lane boulevard, lined with drive-through restaurants, gas stations, and auto supply stores—each fronted by a generously sized parking lot—has long served as a reminder that the United States developed its highways for the automobile, not for people who walk or bike. But when Berlin announced a paving project last summer, Kaplan and his VTrans colleagues saw an opportunity to make the road work for a wider swath of the population: They would put Route 302 on a diet.

Transportation planners are the first to admit it’s an amusing description, but the “road diet” is actually one of the most important elements of a new approach to transportation planning—a philosophy that prioritizes safety for all, putting pedestrians and bicycles on equal footing (so to speak) with cars and trucks. While its goal is not to reduce the volume of traffic, a road diet usually cuts the number of travel lanes, creating space for bicycles, pedestrians, and buses. Car traffic may slow down a bit, but it flows more smoothly. According to the Federal Highway Administration, the approach—which is recommended for roads with a traffic volume of fewer than 20,000 cars per day—has the potential to cut automobile accidents nearly in half, something Vermont authorities welcomed on a stretch that had become notorious for rear-end and sideswipe crashes.

“This is about trying to get the road to function more safely for everybody,” Kaplan asserts, in effect summing up the mission of his entire department, and much of his career so far.

Appropriately enough for someone whose work focuses on more leisurely modes of transportation, Kaplan’s life has taken a meandering course since his days as a civil engineering major at WPI.

I actually never ended up doing any structural engineering once I graduated. Still, WPI prepared me in terms of all the basics of engineering, and learning how to work hard to get things done. Like a lot of life, it’s just the luck of the draw in terms of where I ended up.”

After graduation, Kaplan accepted an offer at a Boston consulting firm. After that came a job on Cape Cod reviewing development plans as an assistant engineer for the Town of Yarmouth. “There was a lot of growth on the Cape at that point,” Kaplan says, recalling how the town became less quiet and rural as the population boomed. “I guess, looking back on it, that was my first exposure to how development can change a place.”

From the Cape, Kaplan headed north, spending five years as a cook in New Hampshire and Vermont before he and his soon-to-be-wife, Anne, decided to move to Oregon. “We just wanted to live somewhere different,” Kaplan says. “We had been in Vermont for a while, so we did a big trip across country. At first we thought we’d like Virginia or, possibly, Colorado, but nothing really struck us as the place to be. We did like Oregon, though.”

The couple settled in Salem, the state’s capital, and Kaplan found work at a restaurant. But he began to crave the more stable working hours of an office job. “I thought, ‘Well, I have this engineering degree …,’” he says. He wound up at the Oregon Department of Transportation, at first on a survey crew, and then as a roadway designer—a job that focused, like most transportation planning still did at the tail end of the 20th century, on cars. But that was beginning to change, and Oregon, one of the more progressive states when it comes to alternative modes of transportation, would lead the way.

Since 1971 Oregon has had a law on the books that requires the state transportation budget to include funding for bicycling and walking. Kaplan became familiar with this law as he worked on roadways—it meant many of his projects required bike lanes and sidewalks. Then, in 1993, he was promoted to a position in the state’s bicycle and pedestrian program, working with state coordinator Michael Ronkin, one of the biggest names in the field.

“He is very well known nationally,” Kaplan says. “He was one of the innovators around bike and pedestrian planning and design in the U.S.

I was really lucky to work for him. He took me to a conference where there were 500 planners and engineers from around North America who were working on bike and pedestrian stuff. I was like, ‘Wow, this is a real thing—it’s not just this little niche.’ It really headed me off in that direction, and that’s what I’ve been doing ever since.” 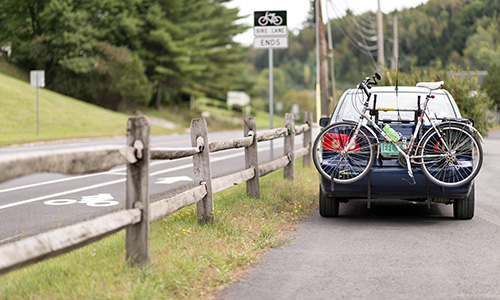 ​Ronkin, Kaplan, and their colleagues at the DOT were among the first state officials to place bicycles and pedestrians on par with automobile traffic. It was a philosophy that continued to inform Kaplan’s work after he and Anne moved back to Vermont in 1995 to be closer to their families, and today it has filtered through much of the field. The current buzzword is “multimodal,” and transportation planners now hope to make roads work for everyone.

Despite this shift, Kaplan laments that many Americans are still biased against bikes. “We got a lot of negative comments on the public survey we did before the road diet,” he says. “I can’t really explain this other than to say that we in the U.S. are still, for now, a car culture. Many people don’t take biking seriously as a mode of transportation, even though it is very efficient, especially for short trips in areas with traffic congestion.”

Still, perspectives can change. In this, Kaplan draws inspiration from a Federal Highway Administration–sponsored tour of Europe he took several years ago, which opened his eyes to the possibility that one day Americans might embrace biking and walking as valid ways to get around.

“It was all about visiting countries that had good records of bike and pedestrian safety and good infrastructure for biking and walking,” Kaplan says. “Copenhagen, in particular, was just incredible. There were as many people biking as there were driving in the center city—just streams of bicyclists: women wearing high heels, men in suits, little kids on the backs of bikes, postal service people delivering mail. It’s just how people get around. I think once you’re exposed to that, you see what’s possible.”

Stateside, a lack of infrastructure for bikes and pedestrians may be partly to blame, and Kaplan is excited about several efforts he and his team are making to change that. In village centers, they have worked with towns to install Rectangular Rapid Flash Beacons, which pedestrians can activate at a crosswalk to emphasize that drivers are required to yield. Kaplan’s office also administers a grant program to help towns improve bike and pedestrian safety and access, including laying sidewalks, installing intersection signals, and widening shoulders on rural roads.

While Vermont has a population smaller than the city of Boston, it can be a challenge to coordinate efforts among the state’s 255 municipalities, each with different needs. But Kaplan has found that, in the eight years since he took over bike and pedestrian projects at the state level, the values he has worked for since his days in Oregon have become more widely accepted. “I no longer have to advocate as strongly as I did in the past,” he says. “People see me as a resource on incorporating biking and walking into projects and we work collaboratively most of the time.”

Kaplan’s life may have taken an indirect course, but looking back, his destination—working on bicycle and pedestrian safety—makes perfect sense.

“You know, thinking about it now,” he says, “how do you get around when you’re a kid? I rode my bike a mile down the street to my best friend’s house. In Worcester I didn’t own a car until my senior year of college. I remember walking downtown with friends all the time.” On Cape Cod, Kaplan biked the three miles to work all summer, whizzing by vacation travelers in bumper-to-bumper traffic. Later, he and his wife biked for fun in Oregon. And today, the entire Kaplan family—Jon, Anne, and their three teenagers—spend weekends biking around their small town of Randolph.

“It’s not uncommon for all five of us to bike downtown for ice cream cones during the summer,” he says. “If I have to go out to the hardware store or to get groceries, I use my bike. I never lock it, partly because we’re in Vermont, but also because it’s a real beater—it doesn’t look like much, but it’s a great bike, totally dependable.”

It’s a lifestyle Kaplan hopes he can help more Vermonters adopt. He’s fond of citing surveys that show as many as 60 percent of Americans would like to bicycle, but are prevented from doing so because of safety concerns. It was with these people in mind that Kaplan and his team planned the Route 302 road diet, the most high-profile bike and pedestrian project Vermont has launched to date.

After extensive studies, the diet began last June. First, VTrans reduced the number of travel lanes from two to one in each direction, adding a turn lane in the middle for drivers turning left. That discouraged speeding and freed up room for a bike lane on either side, as well as space for a buffer zone between cyclists and automobile traffic. [The buffer was Kaplan’s concept, and one that has been shown to make cycling even safer and more comfortable.] Kaplan worked with consultants and with the town of Berlin to coordinate and refine the design; he developed an evaluation plan and worked with the media to get the word out and answer local residents’ questions. The diet seems to have paid off—shortly after the project was completed in August, a video traffic count showed the number of cyclists expanded nearly eight-fold, even as the travel time by car remained roughly the same.

“It’s an exciting thing,” Kaplan says. “There is still a lot to do, but we definitely have made a lot of progress, especially in a place that’s not a big urban center. I’ve heard from colleagues around the country, and a lot of them face some similar challenges—sprawl, car culture. I think what we’re doing could serve as a model for how we can make our streets work for everybody.”