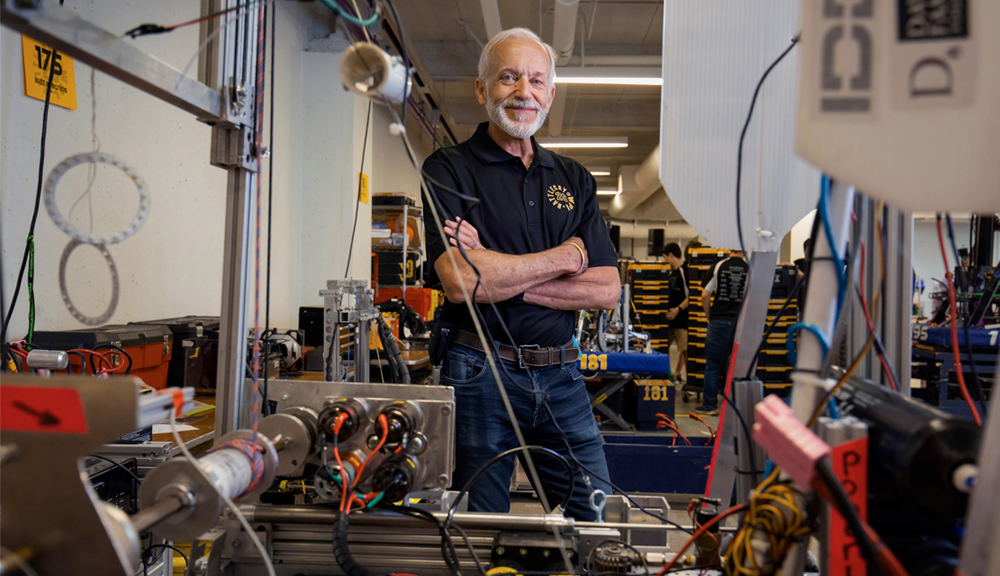 In 1997 associate provost Bill Durgin asked Ken Stafford to consider joining the faculty after wrapping up a highly successful three-year term as commander of the Air Force ROTC Detachment at WPI and a remarkable 24-year Air Force career. Durgin was impressed with Stafford’s experience, enthusiasm, and boundless energy. The proposed job had a title, Director of Academic Initiatives, but Durgin made it clear that Stafford (now retired from full-time teaching and advising) could fill in the details to suit his interests.

Stafford’s Air Force years gave a hint at the professionalism he’d bring to the task. After earning a BS in mechanical engineering at Oregon State and an MS in aeronautical engineering as the top graduate in his class at the Air Force Institute of Technology, he spent three years as an Air Force plant representative at Boeing, helping oversee 12 DoD programs, and served as a navigator and instructor navigator on various versions of the C-130 aircraft, including a model built to pluck film capsules ejected by Corona spy satellites out of thin air.

His initial focus at WPI was a roster of student engineering competitions, but robotics soon became his central passion as he took charge of the FIRST robotics team at the Massachusetts Academy of Math and Science at WPI. Stafford led Team 190 (one of the earliest teams to join the national STEM program launched by Dean Kamen ’73) to regional and national competitions (including a win at the 2007 FIRST Championship). He helped launch the New England regional FIRST competition held at WPI, as well as BattleCry@WPI, considered the nation’s best off-season FIRST competition.
He also co-developed the Robot Sample Return Challenge, the first NASA Centennial Challenge held at a university.

WPI’s success with robotics competitions played a key role in its decision to launch the nation’s first bachelor’s degree program in robotics engineering in 2007 (it offers BS, MS, and PhD degrees today). Stafford embraced the new program, developing and teaching courses, advising dozens of MQPs, and serving as advisor to hundreds of majors. His work on and off campus (including pivotal contributions to the FIRST organization and his evangelism for STEM careers at schools around the region) led to his promotion to full teaching professor and won him two WPI Board of Trustees’ Awards: the Denise Nicoletti Award for Service to Community in 2010 and the Outstanding Teaching Award in 2019. In the citation for the teaching award, a student described Stafford as “the single most enthusiastic and energetic member of the teaching staff at WPI.” He might have added that he also stands as among the most accomplished and impossible to replace.