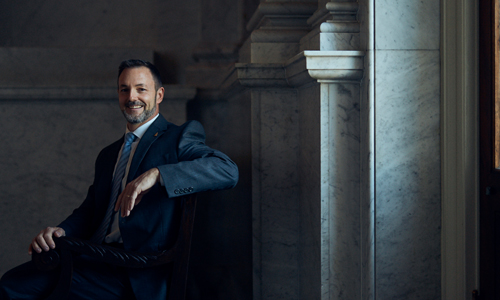 When it comes to safeguarding the nation’s capital, Laurence “LJ” Dallaire is more Smokey Bear than Daniel Webster. While Webster heroically helped douse a blaze that threatened the Library of Congress in 1825, LJ’s approach to fire is a bit less sensational—and much more strategic.

It’s worth noting that when Webster went into action, the officer on duty did not have a key to the library. It took some time to locate the firefighting equipment, and Webster (who was then a member of the U.S. House of Representatives from Massachusetts) had to break into a locked shed to get it.

That wouldn’t happen on Dallaire’s watch.

On a good day, his best work goes unnoticed. No one summons the D.C. Fire Department or the U.S. Capitol Police. The code-compliant smoke detection and sprinkler systems invisibly retrofitted into 200-year-old architecture remain silent. Workers, government officials, and visitors—more than 30,000 in a typical day—flow in and out of the 39 buildings and stroll freely along the 570 acres of gardens and grounds.

Even in somber times, such as December 2018 when the body of President George H.W. Bush lay in state in the Capitol Rotunda, mourners don’t give a thought about the safety planning that goes into such enormous gatherings—because Dallaire does.

A Servant, Not a Sheriff

Since 2009 he’s held the title of fire marshal at the Architect of the Capitol (AOC), the 2,100+ employee organization that serves as builder and steward of the landmark buildings and grounds of the Capitol campus. “The perception is that the fire marshal is there to put things out,” he says, but his job is more about upper-level engineering. Much of the work goes into adapting fire codes and standards to accommodate for the building’s unique features. His beat encompasses everything from on-site daycare to the Capitol Power Plant’s new cogeneration facility. 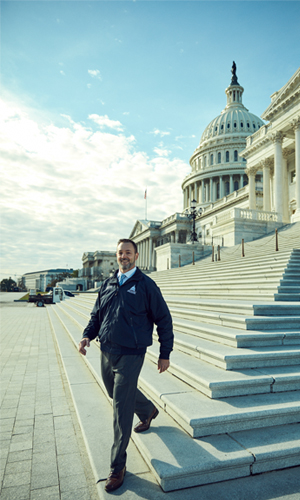 Dallaire defies the image of the stern guy who comes down hard when there’s popcorn burning in the lunchroom microwave. Laughing at that, he concedes, “People make popcorn. Popcorn gets smoky. It’s not my job to tell our constituents or clients what they can and can’t do. It’s more about me recognizing what they do do. And making sure we can deal with that and support their needs.”

LJ came to WPI fired up about the F-14 fighter planes that Tom Cruise flew in the 1986 hit Top Gun. His aim was to major in mechanical engineering and concentrate in aerospace. “I wanted to fly those planes, but I’m colorblind,” he says. “I figured, OK, if I can’t fly, I’ll build the darn things. That’s cool too.” His daily route to his ME classes in Higgins Labs took him right past the office of David Lucht, founding director of WPI’s Center for Firesafety Studies (the progenitor of the Department of Fire Protection Engineering). Curiosity drew him in for a chat, and he came out a convert.

From there, he made the most of project opportunities, bridging from aero to fire protection engineering (FPE). For his MQP, he did microgravity combustion research at NASA. “After I had satisfied my NASA advisor, I had to come back and satisfy Professor [Vahid] Motevalli. He pushed for more and drove me to get deeper answers.” Amused that WPI held him to higher standards, Dallaire mimics his beloved professor’s demands. What is the critical Reynolds number, and what does this mean to your flow? Is it laminar or not laminar? You’ve got to find that out.” He adds, modestly, “I think my project later wound up flying on the space shuttle.”

His IQP assessed possible safety systems for astronauts stationed on the Moon. Speaking by phone from the Ford House Office Building, he jests, “I’m sure there’s a yellowing copy of ‘Lunar Base Fire Detection Systems’ somewhere in my office.” Within minutes he’s got his fingers on it. He beams a cellphone shot of the executive summary, dated 1993, back to WPI. “It was a little aspirational at the time,” he admits.

With a BS in ME and a master’s in FPE from WPI, Dallaire’s career has taken him back and forth between private firms and the government sector. In his commercial jobs, he’s worked on everything from luxury hotels and casinos to the “bathtub projects” at the base of the World Trade Center redevelopment project. A favorite project was New York City’s High Line walking path, an elevated aerial greenway built on former railroad track. He oversaw computer modeling on the complex problem of evacuating crowds safely from a narrow railroad bridge 30 feet off the ground. In an earlier Federal post, Dallaire spent seven years as a fire protection engineer for the Department of State. The job took him to 25 countries to supervise the installation and support of sprinkler and fire alarm systems at U.S. embassies. In some parts of the world, he encountered a very different level of FPE awareness. “I don’t mean to be disparaging,” he says, “but the reality is that in some countries local workers aren’t necessarily exposed to the standards and safety features we have in the U.S.” In addition, the systems had to be operable for someone whose first language was not English. When tech support couldn’t iron out a problem by phone, someone had to get on a plane to fix it. That took to him to Senegal (“Love that place!”), Uganda, Burundi, and some lesser-known places he claims most people would have to look up on a map. 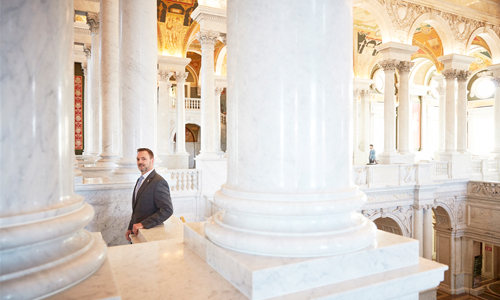 Now, as a guardian of the seat of American government, Dallaire has returned to that ethic of civic responsibility. “The decisions you make, you own,” he says. “Many of these buildings are historical landmarks.” It’s a challenge to uphold modern fire protection standards in structures that were built before the new nation had fire codes—some were designed in the 1700s. They feature precious artwork, such as the frescoes of an Italian painter who’s been called the Michelangelo of the Capitol.

“You don’t just start drilling holes in Constantino Brumidi’s ceilings so you can drop sprinklers in,” Dallaire declares. “And you can’t just shove modern fire-protected stairwells into 100-year-old historic buildings.” Many Capitol Hill buildings feature sweeping marble staircases that are visually stunning, but would not protect crowds fleeing a fire. Dallaire has worked with building managers, designers, and outside regulators to develop alternatives with horizontal fire barriers and other features that provide safe passage through a protected escape route. “We can’t just throw up a big old block wall in what’s supposed to be a beautiful open corridor,” he says. “You’ve got to find alternative ways to provide a level of safety while preserving the historic fabric of the space.”

The solutions are created in collaboration with design engineers and architects, and implemented by the AOC’s specialized carpenters, electricians, plumbers, and craftsmen. “Some of the highest-risk areas are actually their shops, and we have to mitigate risks there as well.” Pointing out that AOC safeguards the enduring symbol of the republic, he says, “We’re not designing for a 40-year life cycle for these buildings. They’re a couple of hundred years old, and we want them to be working for another couple of hundred years.” 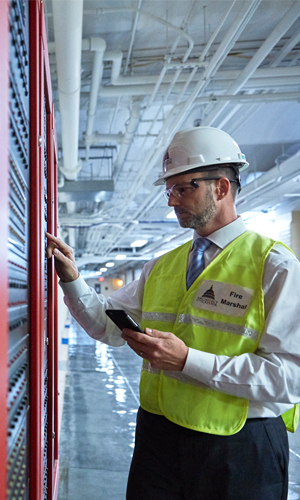 It’s not so much an aesthetic challenge, he says, as a people challenge. “Nothing is more important than the people who come here, and the business of Congress. If a fire alarm goes off at the wrong time, or if construction is causing excessive disruption, that’s a problem. We work hard to make sure that doesn’t happen.” It’s a complex responsibility to keep government running, unobstructed. Asked to name the most important object he safeguards, Dallaire’s answer is surprising. Instead of irreplaceable archives or precious artwork, he names a rather plain structure: “The one we construct every four years: the Inaugural grandstand.”

That wooden structure is over 10,000 square feet in area and seats more than 1,500 dignitaries. They’re flanked by thousands of standees, looking out at a sea of spectators. Dallaire watches out for all those lives, as well as the workers doing the construction and the fire department personnel charged with response. It becomes a number one priority to ensure that the project is safe—and on time. “It’s a hard deadline,” says Dallaire. “We can’t have a have a safety mishap during the construction, or even a small fire. There’s no room for error.”

While many Americans look forward to watching the next president take the oath of office in January 2021, Dallaire expects to be on the job, as he was for the last two ceremonies, making sure that all systems are go. “The whole world is watching,” he observes. “Even though it’s not a physically historic feature, like the Capitol dome or the works in the Library of Congress, it’s something we do to show the world what America is about. I have a small role in that peaceful transfer of power, to make sure that from a fire and safety perspective, everything goes as it’s supposed to. “It’s hard not to be inspired when I walk from my office to anywhere on the Capitol campus, and I see the dome, the grounds, and all the changes. I think of what’s gone on here for 200 years. I feel blessed, every day, working here.”