As the school year winds to a close, many WPI students are feeling the pressure of finals and project deadlines. But the WPI Social Committee has a solid week of fun planned that may help lighten the mood.

“We have a ton of games and giveaways pretty much every single day,” enthused Joe Gay ’14, president of SocComm, the campus group whose motto is “Majoring in Fun Since 1968.” 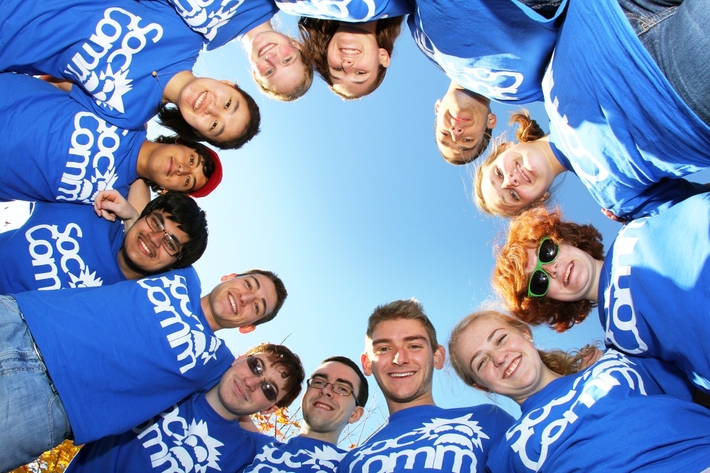 QuadFest, now in its 21st year, will take students on a virtual trip through time between April 15 and 21. Daily themes include “Ancient Civilizations Day” on Monday, “Medieval Day” on Tuesday, “Western Wednesday” and “Future Friday.” To lure WPI students away from studying so they can enjoy the games and food on offer, SocComm will have plenty of giveaways, including kites, Frisbees, and T-shirts. Each participant will also have a chance to win an iPad Mini.

Evening events during QuadFest include an appearance by stand-up comedian Adam Mamawala Tuesday night, student comedy acts Thursday and Friday, and free rock climbing in Harrington Auditorium Wednesday through Friday. Sunday night’s free Movie on the Quad is The Hobbit: An Unexpected Journey.

The week before exams is a good time to let loose a little, says Jessica Williams ’15, SocComm’s annual events co-chair. That’s not only because the weather is nice and students have a break from classes, but because WPI students work so hard during the rest of the school year. “When you see awesome things going on, it keeps you excited about school,” says the mechanical engineering major. “It’s not all work!”

Gay said he was expecting his fellow students to be especially excited about the Big Show, SocComm’s annual spring concert. Tickets are on sale now for the show, which is cosponsored by Colleges Against Cancer, and half of the proceeds will go to Relay for Life.

SocComm surveyed undergraduates during B term, asking them which genre of music they would enjoy and which bands they might like to see. This year’s performers, who came highly recommended by students, are Timeflies, a hard-to-categorize duo that combines hip hop, pop, and electronic music; and The White Panda, which makes mash-ups of pop and hip hop songs. They will take the stage at Harrington Auditorium on Saturday, April 20.

“These are up-and-coming artists,” Gay says, noting that previous years have featured nostalgic acts. “We haven’t had so much interest in the bands in a long time. It’s going to be a great show.”

A mechanical engineering major who joined SocComm his freshman year, Gay said heading the group this year was not only a great leadership opportunity but “a lot of fun, too.”

“I love being involved, because it helps defuse some of the stress of WPI,” he says with a laugh.

For more information, including a schedule of events, visit SocComm on Facebook, at www.facebook.com/pages/SocComm/117140154564.