Matthew Goldman: The Man Behind Television’s Next Big Things

Matthew Goldman ’83 (’88 MS) might not always have been able to see television’s future—but he’s definitely helped create it. He would be the first person to tell you that he doesn’t have much in common with red-carpet celebrities like Bryan Cranston, Justin Timberlake, and Helen Mirren. But there is one similarity worth mentioning: each has taken home four Emmys.

Goldman’s engineering Emmy wins—shared with the teams and companies he worked with to develop his award-winning technology—weren’t broadcast to millions. But the statues, which sit on a bookshelf in his office, are prestigious, nonetheless. They recognize work that has transformed the way we watch television.

Having emerged as one of the brightest leaders in a medium that has undergone almost constant upheaval, Goldman, has helped propel the changes that have made watching television more expansive and immersive. And the ambition and curiosity that have driven him to where he is today were honed, in part, during his days at WPI.

Early inklings of a leading voice Goldman, son of an engineer who was general manager of an independent cable company, admits that before he arrived at WPI, he dreamed of going to MIT, where one of his brothers studied. But when he arrived on WPI’s campus after receiving his acceptance letter, he knew he was home. “It was such a small, personal place,” he says. “It felt like going to camp.”

He loved the small classes, the ability to meet one-on-one with his professors, and the opportunity to do hands-on projects. But more than anything, he loved the chance to get deeply involved in many parts of campus life. He joined a fraternity, served as junior prom spring weekend chairman, and was elected student body president his senior year.

He still marvels at the opportunities he could create for himself. Through his classes and leadership work, he learned to collaborate with others, whether that meant finishing an academic project or hosting a campus wide event. As a student leader, he loved rubbing shoulders with some of WPI’s most powerful decision makers. “I got to hang out with the provost and the dean of students,” he says. “That meant a lot to me, especially when I think I might have been a nobody at a different school.” Those skills he sharpened at WPI—working with others and solving hard problems—would prove to be exceptionally valuable going forward. 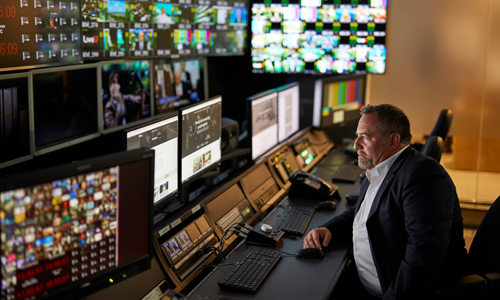 The News Corp/FOX News control room in NYC is one of many within a typical broadcast center where live program schedules are created, mixed, and switched onto air. Because the bandwidth of video is so high (bandwidth is a limited resource), video goes on air in a compressed format. Goldman works on compression equipment used by Fox and other broadcasters worldwide.

With his BS in electrical engineering, Goldman spent his first few years after graduation working on military projects at Raytheon before landing at Digital Equipment Corporation. One of his first projects there was to design circuitry for the VAX 9000, digital’s first foray into high-performance mainframe computing. He was thrilled to be working with top-flight engineers, soaking up their knowledge and ideas. “I wanted to be in the best engineering group so I could learn from the best and be part of the best,” he says.

Eventually, he ended up working in high-end data-server design. One day, while manning a booth at a trade show during the early ’90s, two customers stopped and asked, “Has DEC ever considered sending live or real-time video over data servers?”

At that moment, Goldman recalls with a laugh, the other employees in the booth turned toward him and said, “Oh, Matthew used to work in a cable company—he knows all about video.” He admits that his knowledge was limited to what he’d gleaned doing odds and ends over summer vacations at his father’s company. “It got dumped on me,” he says.

That serendipitous moment turned into an inflection point. At the time, the idea of sending video over data servers seemed so wild that a 1992 article in the New York Times described it as nothing short of science fiction. “Imagine,” the reporter wrote, “if you could send yourself by phone and television to a professor’s live lecture at a distant university, or pick up your phone, call the neighborhood video store, and ask that Casablanca be transmitted to your TV set.”

By 1993 Goldman was attending Moving Picture Experts Group (MPEG) meetings to help develop international standards forencoding, compressing, and transporting video images. MPEG founder Leonardo Chiariglione remembers that it didn’t take long for Goldman to make an impact. “Matt was a newcomer, but he immediately became part of the core MPEG-2 Systems group of experts and co-editor of the MPEG-2 Systems standard,” he says.

Even today, MPEG-2 Systems is commonly used in cable, satellite, and terrestrial media. Goldman is quick to clarify that he didn’t work on the compression of audio or video, but the systems and transport layer of these initiatives. “It’s like trains,” he says. “If you create a standard—for example, if the thickness and spacing of the track is known—then different companies can design their wheels to fit on the track, and the cars to fit on those wheels. The whole point of doing standardization is to foster interoperability, so that everybody’s [technology] can communicate with each other.” His work on the MPEG-2 Systems ultimately earned him and his team an Emmy.

While Goldman is proud of the work he did on MPEG-2 Systems, he adds that he didn’t foresee its immense and enduring value. “I’d love to say that when I got put in the MPEG community, I knew exactly what it was and took full advantage of it. Hell, no!” he says, joking that if he’d had the foresight to retain some ownership in the intellectual property that emerged from the project, he’d be busy helicoptering to his own private island. “I just got dragged along in the tornado.”

Seeing the next wave

Over ensuing decades, Goldman continued to tackle innovative projects for the companies he worked for, which include DiviCom, Tandberg Television, and, since 2007, Ericsson Media Solutions, the media division of the networking and telecommunications company Ericsson, which recently re-launched as MediaKind, a joint venture of One Equity Partners and Ericsson. 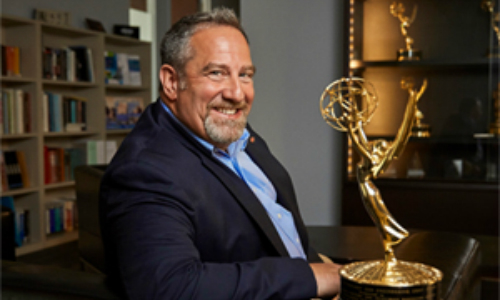 Goldman among the many Emmys SMPTE has garnered through the years. A member since 1997 and current president, he’s worked on four different projects that have earned him Emmys.

For example, after television went through its massive analog-to-digital switch, Goldman and his team worked on Emmy-winning hardware and code that made it easier for television affiliates—local stations that are linked to big national networks—to add in special effects, like on-screen logos and “squeeze and tease” effects that compress the size of a show on screen to allow the affiliate to promote upcoming programming.

He and his team also received an Emmy for a set of protocols linked to digital ad insertion, an innovation that allows companies to offer targeted ads to consumers. “Everybody hates us for that,” he admits.

Today, as senior vice president technology at MediaKind, Goldman is still involved with creating standards and defining products, but much of his work is as a technology evangelist, which includes speaking at trade shows and writing white papers.

What he’s excited about now is high-dynamic range (HDR) television. More so than the other hyped technologies like 4K or even 360-degree video, Goldman says that this technology will change the way we think about television as an experience. “HDR is probably the most important change to happen to television since we went from black and white to color,” he enthuses.

He’s not the only one excited about this next-generation technology: in 2015, the National Association of Broadcasters honored him with a “Best Paper Award” for a publication he co-authored about the techniques and potential of the technology.

Richard Friedel, executive vice president and general manager for Fox Networks Engineering and Operations, isn’t surprised that Goldman’s work got attention. Goldman has long been able to balance his industry expertise with persuasive enthusiasm. “His technical knowledge is thorough and deep,” Freidel says. “He communicates well and is a great educator, often in demand to provide presentations at industry meetings.”

Goldman’s passion and knowledge have also been essential for his work with the Society of Motion Picture & Television Engineers. As the current president of the global professional organization that has more than 7,000 members worldwide, he has further developed standards and mentored young engineers who will make television’s next big advances.

A mindset geared toward perfection

In a world where our attention seems increasingly gobbled up by the things we watch in bits, bytes, and pixels—a world that Goldman has happily helped create—it may perhaps come as a surprise that, outside of his job, he delights in analog technologies.

He loves spending time on his sleek Indian motorcycle and in his sporty 2001 BMW M Roadster, complete with analog dials. “Digital gauges?” he scoffs, “They just don’t look cool.”

He wears an analog watch, too, and loves the sweep of the hands around the dial—and the fact that, unlike some of his younger colleagues, he can still read the time off it.

But if there’s an overarching idea that connects his love for these physical objects with his enthusiasm for digital television advances, it’s this: he cannot help but appreciate elegant engineering perfectly executed. It’s a trait fostered at WPI, and one he’s carried throughout his career.

“Matthew,” says fellow SMPTE executive director Barbara Lange, “is someone who is focused on getting things right.”

As much as Goldman expects himself to meet high standards, he appreciates when such standards are achieved in other fields as well. In both the digital world and the physical one, he loves to see perfectly refined technology—every part—working together in sync to deliver an experience that delights.