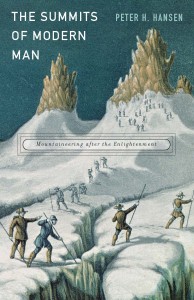 Climbing a mountain represents more than an arduous journey.

The ascent to the top of the world’s highest peaks can also reflect climbers’ attitude toward nature and to their fellow man, and not always in the best ways, Professor Peter Hansen believes.

He looks at the relationship between mountains and man in his upcoming book, The Summits of Modern Man: Mountaineering After Enlightment,scheduled for release in May by Harvard University Press.

Mountains,were seen at one time as massive mysteries, encrusted with ice and snow and inaccessible to humans. But in the 17th and 18th centuries, during the Age of Enlightenment, man began successfully scaling these heights. And as man reached the tops of these natural formations, Hansen says, man suddenly began viewing nature as something to be dominated. He compares this to “modern man slaying the dragon with machismo.” Mountain climbing, he says, “emerged as a form of modern individuality.”

Hansen, associate professor of humanities and arts, is no stranger to examining cultural history. He has written about Colonialism, cross-cultural encounters, and western encounters with Tibet. He has served as a consultant and commentator for the British Broadcasting Corporation for television programs about Mount Everest and the Matterhorn. He received his PhD in history from Harvard in 1991; his dissertation explored British mountaineering from 1850-1914.

The obsession with “who got to the top first,” Hansen’s book theorizes, may have begun in 1786, the year Jacques Balmat and Michel-Gabriel Paccard climbed Mont Blanc. The once towering mass became something man could triumph over and with that, nature could be dominated rather than viewed as all-powerful and almost mystical.

But was she, really? A young servant named Maria Paradis reached the summit 30 years earlier. Nevertheless, d’Angeville considered herself the first “lady” to reach the top. She claimed that title because she was the first who could “record her impressions” because Paradis was less educated.

“She considered her predecessor as a simple woman,” Hansen says. “There was a class difference between the two women.”

That change of attitude can be reflected in modern challenges, he says. Global warming, for instance, requires humans to seek solutions for climate changes produced by nature.

One example, he says, is cloud seeding, a man-made form of weather modification that changes the amount or type of precipitation that falls from clouds. “That’s the same attitude of domination.”

Hansen says he does not oppose mountaineering; he is simply concerned about the attitude climbers have toward the challenge. He also believes that the sense of “conquest” over a mountain has faded among modern mountaineers.

The attitude of dominance over nature “troubles most climbers today,” he says. “Most modern climbers report that the experience makes you more humble. You realize your littleness.”