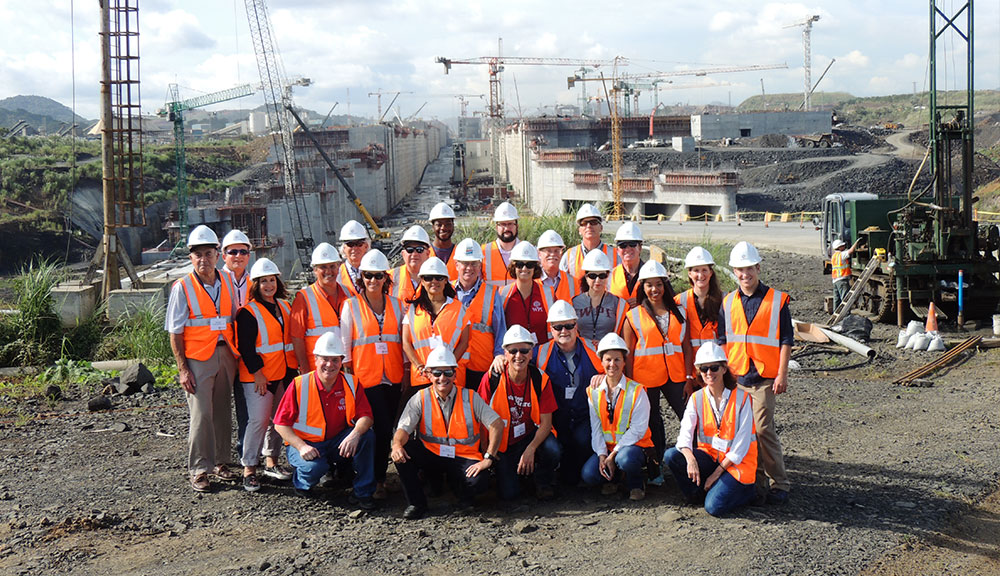 Decades in the Making

If a prototype exists for a strong and effective college alumni group, it can be found in Panama. Though formalized as the WPI Panama Alumni Chapter only a year ago, its members have long served as unofficial ambassadors for the university and were instrumental in creating a project center in their country’s capital.

The alumni chapter’s stirrings began in the early 1980s when the first wave of Panamanian students graduated from WPI. Graduates stayed in touch over the decades, drawn together by the shared experience of traveling to a college far from home, then returning with a unique education and a desire to help advance their country. Roughly 50 Panamanians have graduated from WPI since Irvin Halman ’80 initiated this wave.

At first, the alumni socialized, supported one another professionally, and promoted their alma mater to high schoolers. But over time and as they rose in their government and private sector careers, they wanted to etch a deeper role for WPI in their country. With the Panama Canal expansion and a high-rise construction boom, among other developments, Panama offered hands-on learning opportunities that seemed tailor-made for WPI students.

“We saw that the school was running projects in the region, but not in Panama,” says chapter president Fernando Motta ’83. “It’s a country that’s developing very rapidly and we thought there were great opportunities to make a difference in Panama. It was a dream of ours to have WPI students helping Panama and also to have more students from Panama go to WPI.” Motta is CEO of Felipe Motta, a food, wine, and spirits retailer and distributor.

In promoting a project center to WPI, the group cited Panama’s diversity, stability, development opportunities, and, just as important, “the many alumni now residing in Panama to support and advise WPI in this endeavor,” recalls Halman, who currently serves in the public sector in a five-year post as general administrator of his country’s National Authority for Government Innovation (the agency in charge of digital transformation).

In 2007 the alumni hosted WPI senior administrators and helped identify potential projects in civil engineering, water management, and operations management. Two years later, professor Tahar El-Korchi and former professor Jeanine Plummer of the Civil and Environmental Engineering Department established the Panama Project Center in Panama City. To date, WPI students and faculty have spent over 10,000 hours of project activity to benefit the Panama Canal Authority, and another 12,000 hours to benefit other partners, including Copa Airlines.

With encouragement from WPI, the alumni adopted a charter and in 2015 it became the Institute’s first international alumni chapter. This October WPI graduates in Hong Kong followed suit, and a Beijing alumni chapter is in the works, according to Karen Bean, executive director of advancement for global strategies and special projects.

“They’re the ideal model for an alumni chapter. If we could just replicate the enthusiasm and the structure around the globe, it would be wonderful,” Bean says of the Panama group.

International graduates have firsthand knowledge of both WPI’s curriculum and critical needs in their home nations. Their willingness to help students apply their education to these challenges make them integral to advancing the global initiatives laid out in President Leshin’s strategic plan, Elevate Impact.

“The alumni group has opened a lot of doors for us,” El-Korchi says of the Panama alumni. “They’ve been our networking champions.”

For Motta and Halman, WPI’s presence in their country has stoked pride in their alma mater, in their country, and in the strength of their chapter. WPI alumni have served in leadership positions in the Chamber of Commerce, Industry and Agriculture of  Panama (three as its president), Panama Canal Authority, National Private Sector Council, and other governmental and private agencies. All of this has translated into greater philanthropic support for WPI, as well; last year the Panama Alumni Chapter presented a check for $50,000 to WPI to support students and faculty.

“This is no coincidence,” Halman says. “This is the work of the WPI Plan, which instills and develops a leadership interested in giving back and contributing for a better society.”