On Point with Luna

Yasmeen Luna using her bio degree in the conservation field

Yasmeen Luna’s first steps toward WPI started four years ago with an invitation on her high school basketball court. Tomorrow she’ll step up to the podium to accept her degree in biology and biotechnology, and will graduate with the satisfaction of having helped the WPI women win the 2016 NEWMAC Women’s Basketball Tournament crown.

“I don’t know what’s bigger or more nerve-racking—the championship game or graduation,” says Luna, who is from North Providence, R.I.

She first heard about WPI when women’s basketball coach Cherise Galasso recruited her at one of her high school games. Luna says she agreed to visit and fell in love with the school. Once here, she joined the team and basketball continued to be a big part of her life. Without a doubt, the highlight was starting as point guard in her senior year and winning the NEWMAC conference crown with her teammates.

“It was a lot of work, but definitely worth it,” she says.

Off the court, Luna found her passion and career path. At first she planned to major in computer science, but after taking a couple of biology courses, she changed her mind.

“I’d always been Interested in animals, the environment, and forensics. I definitely like how much you can do with a bio degree. It’s so broad, and that’s really appealing.

That breadth is apparent in her IQP and MQP. IQP students work with local organizations to tackle real-life problems and challenges where science and technology meet social issues and human needs. MQP students pursue technical projects in their major course of study, frequently in partnership with industry leaders and other universities.

She and her IQP team worked with the Worcester Division of Public Health to organize a walk within communities of the Greater Worcester area. Set to occur in the near future, this walk will garner support and awareness for the DPH’s Community Health Improvement Plan (CHIP), Luna says. 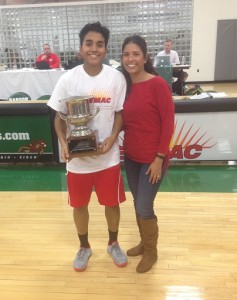 Yasmeen and her mother, Jimena Resto.

“We ran a hydrogen stable isotope analysis of American Redstart rectrices. From the results of this analysis we were able to determine the effects age and sex may have on migratory patterns. In respect to conservation, identifying migratory patterns and sites may help scientists implement conservation efforts to protect bird species,” she says.

Luna says both projects not only taught her about different ways to use her major, but about the importance of teamwork.

“You can never get enough experience in teamwork,” she says, adding, “With my IQP in particular, I got an idea of what it would be like to have a job.”

After graduation, Luna will move to Arizona for a yearlong internship at the Tumacácori National Historical Park. As a natural resource intern, her duties will include helping preserve the land, making sure it is habitable for the migratory species that live there, and caring for the historical and cultural sites in the park.

As for future plans, “I’m hoping my experience over the next year in Arizona will lead me to a better understanding of where I fit best in the conservation field,” she says. “Without a doubt, I would like to continue to work for any organization whose mission is to help preserve the environment and world we live in.”

Luna says she will miss all the friends she has made at WPI. Not only her teammates but the friendships with classmates, many of whom came to study here from outside the U.S. The good news, she adds, is that, “Now, I have connections all over the world.”