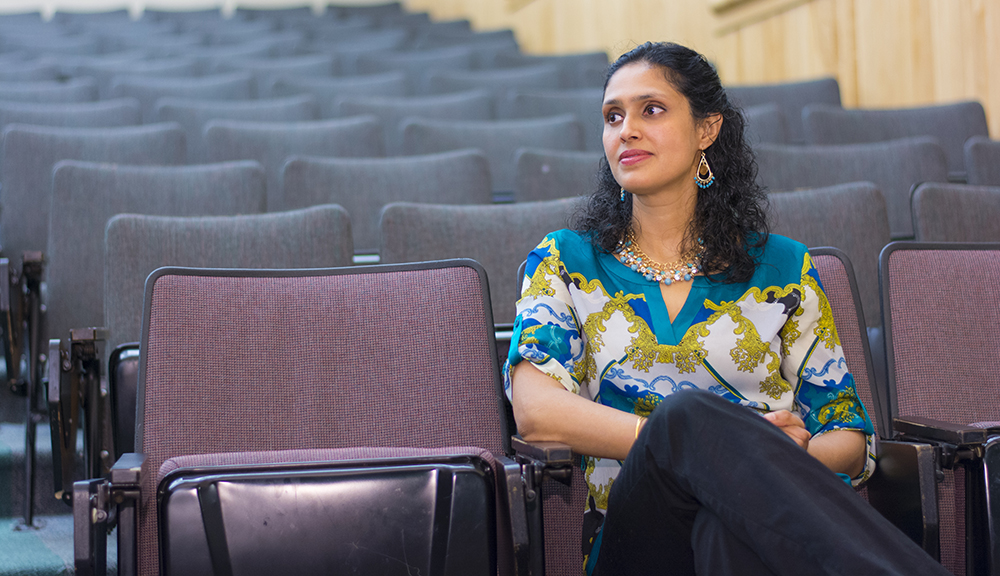 ASIMA SILVA ’01, ’04 (MS CS) is not afraid of questions. Through her organization, EnjoinGood enjoingood.org), she promotes frank dialog with “everyday Muslims” on everything from “that goofy headscarf” to Islamophobia in America. Her mission began at WPI and this year took her all the way to the White House. In April she returned to campus to present a workshop for educators through WPI’s International House.

WHAT WAS THE INSPIRATION FOR ENJOINGOOD? My passion has always been dispelling misconceptions regarding Islam. I’m not a scholar, but the preconceived notions people have about Muslims and how they practice are typically very simple and easily dispelled by giving our neighbors a few moments of our time. The specific trigger for creating EnjoinGood was the bullying of my daughter at her school in Holden. After meeting many roadblocks, I engaged the ACLU, and we resolved the situation to some extent. But the core issue of Islamophobia was still there.

HOW DID THE CLIMATE CHANGE DURING YOUR TIME AT WPI? When I was an undergraduate, Islam and Muslims were an unknown, and thus a non-factor for most students. After 9/11, Muslims had trouble getting education visas, and others shied away from being associated with the Muslim Students Association due to an increase in hate crimes. The faculty was always open-minded, considerate, and supportive of spreading awareness, but with the climate of fear being portrayed in the media, it was easier to stay out of the spotlight. When I began my graduate studies, I took an advisory role to help the MSA return to its previous state. As a representative of the MSA, I spoke out against the 9/11 attacks at a vigil at Worcester’s City Hall along with other area leaders.

TELL US ABOUT MEET A MUSLIM DAY. It was held at the Worcester Islamic Center in January. Over 1,000 neighbors attended, supported by about 50 volunteers, giving people a chance to meet “everyday” Muslims. I gave tours of the center, and we had booths for visitors to learn about the Prophet Muhammad, the hijab, women’s rights, Islamic art, Arabic calligraphy, and Sharia law—and to taste ethnic foods. It made people happy on all fronts.

WHAT WAS IT LIKE VISITING WASHINGTON FOR THE STATE OF THE UNION ADDRESS? I am honored to have been selected to be Rep. Jim McGovern’s guest, in response to the hate rhetoric by some residential candidates. The experience was humbling. It made me realize how well our democracy works. Many Muslims feel that the United States is the closest form of government to the ideal Islamic Democracy outlined by scripture and by historical context. Ironically, most “Islamic” forms of government today are dictatorships and monarchies, which go against the preachings of Islam. This makes me proud to be an American Muslim and a Muslim American. The highlight was meeting President Obama. I thanked him for his speech because he focused on many of my passions.

WHAT’S THE BIGGEST MISCONCEPTION ABOUT ISLAM THAT YOU ENCOUNTER? WHAT WILL IT TAKE TO CHANGE PEOPLE’S PERCEPTIONS? The media and many politicians have created a culture of fear, and the newest bogeyman is what has been called Islamic Terrorism. It’s very easy to think that all Muslims associate with the same misguided thinking that terrorists use to condone their actions. The vast majority of Muslims stand against these actions, but the community would never know it, because they don’t know their Muslim neighbors. This is where Meet a Muslim Day comes in. Islam is inherently tolerant toward other cultures and we are encouraged to learn about other religions. Education and conversation are essential to changing people’s perceptions.