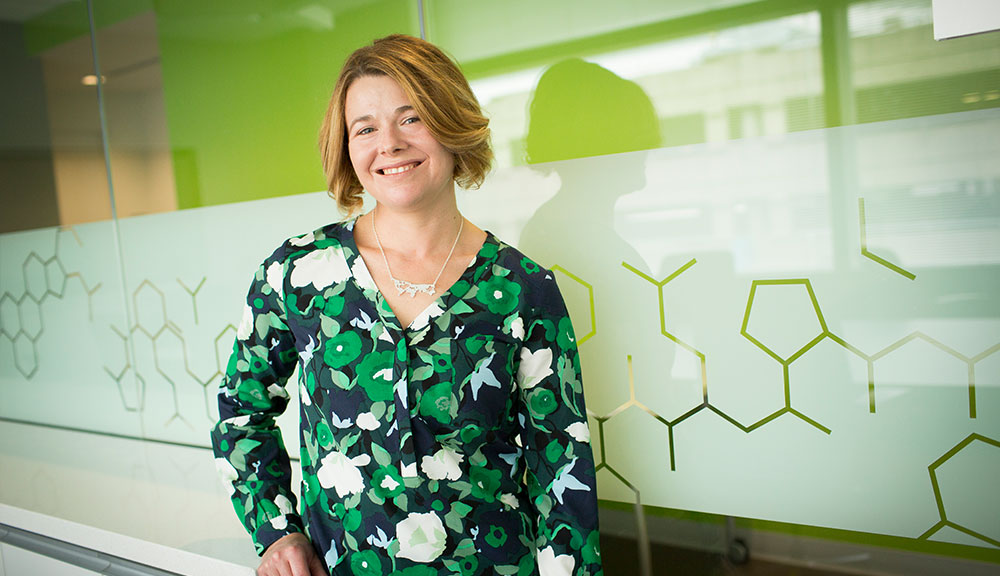 In 2005 Anne (Zichittella) Cheung ‘99 (MS) was losing sleep. Anne Rapin, a close friend, had just returned from Cameroon, where she’d taught science to upper-level students as a Peace Corps volunteer. Rapin had brought home some unsettling stories from the West African country. For Cheung, one stuck out.

“She’d said something in her classroom one day about how girls can do anything that boys can do,” Cheung recalls. “And one of the girls in her class actually said, ‘No, you’re wrong, Madam, we can’t.’”

Rapin explained that in Cameroon girls are far less likely to get an education than boys because they’re often thought to have less potential. Also, they’re frequently married off at a young age and, therefore, they stop going to school, teachers sometimes approach girls for sex in exchange for good grades, and girls are kicked out of school if they become pregnant.

Cheung couldn’t stop thinking about it. As a senior associate scientist with the biopharmaceutical company Biogen, she was acutely aware of how education and opportunity had shaped her life. So had helping people. Through her volunteer work and her job she’s helped discover new treatments for neurodegenerative diseases, such as Alzheimer’s.

The more she learned about the disparities facing girls in Cameroon, the more Cheung felt compelled to do something. After talking with Peace Corps volunteers working in that country, she and Rapin decided start a scholarship program for girls there. With a recruiting bonus from work, Cheung was able to pay for a year of schooling for 17 students, at about $75 each. Soon after, she and Rapin launched a nonprofit, A2Empowerment (A2 is for the two Annes), to continue the program. To date, they’ve funded more than 980 scholarships.

The first thing you should know about Anne Cheung is that she’s humble. She’d much rather talk about other people—and about doing things for other people—than discuss herself. That quality helps make her “an inspiration to almost everyone who knows her,” Rapin says.

Cheung grew up in a family of educators. Her mother, who returned to school to become a high school chemistry teacher [and who went on to earn a PhD at age 50], would often bring 5-year-old Anne to the lab to look through microscopes. Cheung says she was the best role model a girl could ask for. Her father, a grammar school teacher, would take her on nature walks and science museum outings. Because their parents hadn’t had the benefit of a college degree, she says her own parents were especially passionate about the value of education. With education, they taught her, life could be better; doors could open. “I think that’s been a theme throughout all the extra work I’ve done,” she says.

From the moment she first peered through those microscopes, Cheung was drawn to science; a job fair in high school solidified her path. She talked with a biochemist from Roswell Park Cancer Institute who told her about a cancer patient who was given a poor prognosis. When the biochemist tested the tumor, he found that the cancer wasn’t life threatening, after all.

“He excitedly described how awesome it was to be able to give such wonderful news to that patient, and how it helped in other ways,” says Cheung. “That conversation had a huge impact on me.” She’d seen family members battle diseases like Alzheimer’s and cancer, and she felt helpless watching them suffer. Now, she’d discovered a way that she could make a difference. Science meant hope. 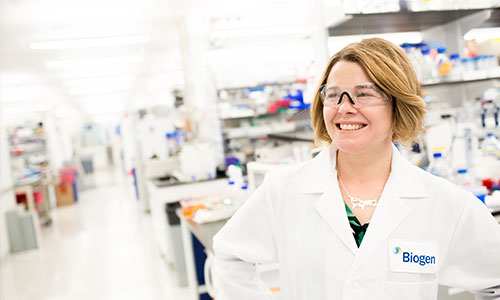 After completing her BS in molecular biology at SUNY Fredonia, Cheung came to WPI to earn an MS in biochemistry. A teaching assistantship covered her tuition and provided a stipend for living expenses. “It was such a gift to have that opportunity,” she says. She went on to become a research assistant in the lab of José Argüello, where she, studied the form and function relationship between enzymes and cells.

That lab was the setting for two life-changing moments. It’s where she first became interested in the structure/function relationship of proteins and intrigued by the possibility of using that knowledge to target proteins associated with disease. It’s also where she met an undergraduate named Man Ching Cheung, who she’d go on to marry.

She says she picked up a lot of new technical skills in the Argüello lab, though the most important takeaway was learning to think like a scientist: being inquisitive, studying background information to make informed choices, and then solving problems as they arise. “Being able to adapt and not be afraid of change would be the most important thing I learned in his lab,” she says.

After they graduated, Anne and Man Ching moved to Boston, where she accepted a job with Biogen. Working in the protein biochemistry group, she took on the challenge of producing and characterizing several complex recombinant proteins. Paul Weinreb, director of Biologics Drug Discovery, says Cheung’s education made her a great fit. “Anne’s training and education at WPI spanned a wide range of scientific areas—from molecular biology to cell biology to biochemistry—and her work in Professor Argüello’s lab gave her a skill set that she could apply to nearly any biochemical system,” he says.

“Most important, she learned how to design and troubleshoot experiments; she developed the types of problem-solving skills that are fundamental to being a successful scientist.”

Sixteen years later, she’s still in Biogen’s biochemistry department, as part of a team developing an antibody that targets one of the misfolded proteins associated with Alzheimer’s. If it’s successful, it could help slow the progression of the disease. She’s also worked on projects aimed at slowing the progression of certain types of breast cancer, and is developing a diagnostic test for a latent virus that can cause severe debilitation or death in patients with suppressed immune systems. 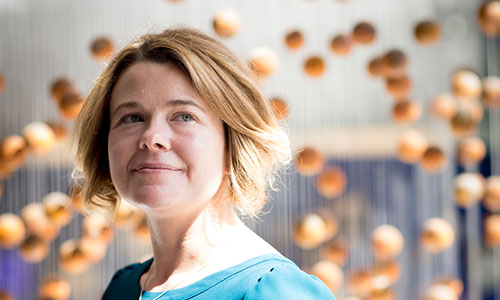 ​Cheung takes a measured approach to her projects, knowing that testing can take years, and that a high percentage of research won’t ultimately lead to a commercial product since so many things can go wrong along the way. At Biogen, she’s found that the success rate for drugs entering Phase I clinical trials is about 10 percent.

That, in part, drove her to find new areas where she could make a difference—as a volunteer. “I got into science because I wanted to help people—and it seemed so interesting, and I had that push from my mom,” she says. But once she began working in the field, she says, “it seemed not as hands-on as I wanted, so I found new avenues.”

Cheung is a frequent presence at the Biogen Community Lab, where she teaches school kids about science and mentors them on their science fair projects. In her early days at Biogen, she got involved with the Big Sister Association of Greater Boston, and met Lois Contreras. Cheung became the 9-year-old’s mentor, taking her bowling and to the theatre—pursuits the young girl had never experienced. Through Contreras’s years in grammar school and then high school and college, and through Cheung’s marriage and the birth of her two sons, their friendship grew. Now 25, Contreras says Cheung inspired her to take school more seriously, and helped her see that education could open doors. “She makes you want to be a good person in this world, to do something meaningful,” says Contreras, who works as an educator at Roca, a Boston-area nonprofit, where she teaches young mothers who didn’t complete high school. She tells them that education can open doors for them, too. “I can talk about Anne forever,” says Contreras. “She’s one of the most awesome people I’ve ever met in my life.”

Biogen’s Weinreb is also effusive about Cheung. “Whether it is her scientific contributions to discovering new treatments for neurodegenerative disease, such as multiple sclerosis or Alzheimer’s, her volunteer work with the Community Lab, or, perhaps most notably, her efforts to establish and run a charitable foundation to help girls and women in Cameroon, Anne has always demonstrated that she truly cares. She is truly passionate about empowering women in science, and these causes all are consistent with that goal.”

In fact, Fortune magazine in 2015 named Cheung one of the “Heroes of the 500,” highlighting her work with A2Empowerment. The annual list spotlights extraordinary people working for Fortune 500 companies.

In 2011, a few years after starting A2Empowerment, Cheung flew to Cameroon. It was the first time she’d been to Africa, or to a developing country, and it made her appreciate, immensely, how easy her life had been and the educational opportunities she’s had.

In a small rural village she met 14 scholarship recipients who threw a party to thank her. A father of one girl told Cheung how grateful he was that the scholarship made it possible for his daughter to go back to school. “He said he didn’t cry for her because she can buy her own bread and buy her own soap,” Cheung recalls, her voice growing soft. “And I just thought about how hard it must be to not be able to send your kid to school if you wanted to.”

While the trip inspired her, she’s not sure she’ll make a habit of it. “What I paid for the whole trip, it could have been a lot of scholarships,” she says.

Lately, Cheung has been pondering how to do even more. She thinks the scholarship program in Cameroon is a good start, but she’d love to find a way to help the girls gain skills and jobs so they can support themselves. She’s considering completing her MBA through WPI to help guide her. Because she’s seen the doors education can open, she’s determined to keep knocking.

“I decided I’m just going to keep working toward helping those girls, no matter what. There’s more I can always do, until I’m done. I feel so passionate about how important education is and the ripple effect it can have. And I don’t want to ever stop.”