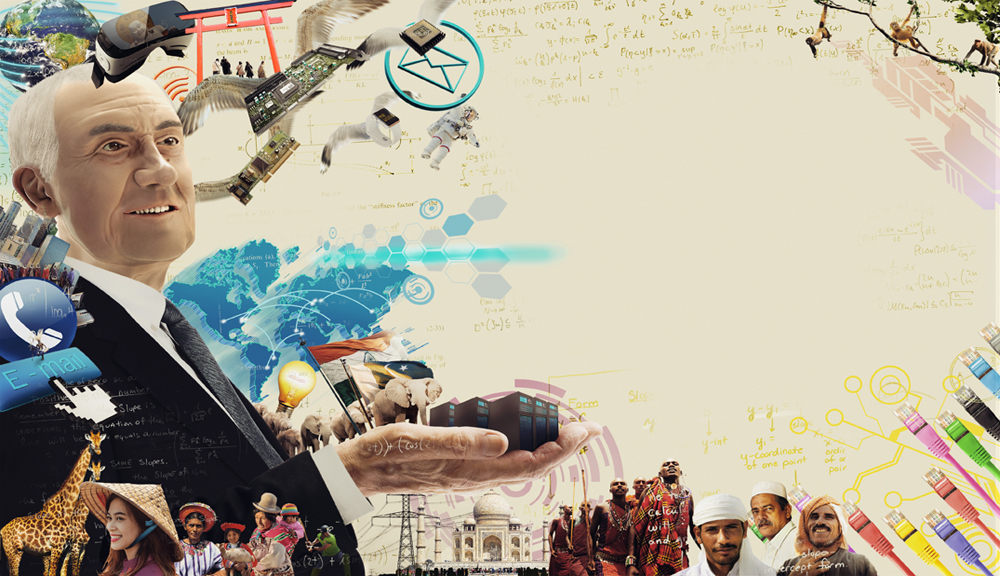 Bob Woog had been living in Tehran for almost four years when everything started to fall apart. It was 1978 and he and his wife, Barbara Jean, both AT&T specialists on temporary assignment to Iran’s national telecom company, had been working to modernize the country’s long-distance communication system. The couple had a one-year-old daughter, a settled life, and a network of Iranian friends, and their project was nearly complete when strikes and demonstrations rocked the nation. The Iranian Revolution had begun.

It turned out that his best friend was chief of staff for the resistance movement, which was fighting to topple the country’s monarch, the Shah. Despite Woog’s work for the Shah’s government, the ties of friendship would protect the American engineer and his family.

“The phone would ring at the house, and you’d pick it up,” he recalls. “A voice would say, ‘Don’t be at this corner of this street and that street between 10 and 12 today.’ At the end, we were right there in the middle of the Revolution. But I knew that my friends would smuggle me out of the country if it came to that.”

Eventually, it did come to that— another friend secured the Woogs’ tickets on a departing KLM flight. “We were under military curfew, but we broke it,” he says. “We put together a convoy and had a caravan go to the airport, and we really just got lucky, but we got out.”

It was perhaps more excitement than the electrical engineering graduate from suburban Connecticut had signed up for, but what saved the Woogs were the connections they made in a country where they had landed just a few years earlier without speaking a word of the local language. And nearly half a century after Bob Woog graduated from WPI, that extraordinary ability to forge connections despite differences of language, culture, race, generation, and outlook on life has become the clear theme of a long, successful career—with ups and downs, plenty of adventure, and countless friends made along the way.

As different as Tehran was from New England, living in Iran was not Woog’s first experience as an outsider.

“My parents were from Europe, they had strong accents, and maybe because I’m Jewish, I grew up a little different, and conscious of that,” he says.

His father was German, his mother the privileged granddaughter of one of Lithuania’s leading industrialists. The couple met at a ski resort in Czechoslovakia in 1938 and stayed in touch, later reuniting in London, where Woog’s father had fled the Nazis and where his mother was in college. They married, then traveled to New York to sell folding umbrellas, a new technology at the time. What was originally intended as a business trip turned permanent after the United States entered the war. Bob was born a few years later in Connecticut, the second of two sons.

“There were only about six Jewish kids in my high school,” he says. “It was a WASPy environment, and although there wasn’t much anti-Semitism, you just felt you were a minority.”

After high school, Woog landed at WPI, following his gut as he weighed several tech schools across the Northeast. He quickly became a popular figure on campus, but after he was elected chair of the junior prom for 1967 he ascended to the status of legend—at least among the students who were lucky enough to be in Worcester when jazz icon Louis Armstrong came to play.

“He boasted about how we should bring in a big name for the prom ... and he did,” recalls his good friend Jack McCabe ’68. “No one believed him until the night of the prom—it was pretty amazing when Louis Armstrong really showed up.”

Nearly half a century after Bob Woog graduated from WPI, that extraordinary ability to forge connections despite differences of language, culture, race, generation, and outlook on life has become the clear theme of a long, successful career.

As a senior, Woog served as student body president, and it was in this position that his budding talent as a diplomat first came in handy. He learned he could serve as a bridge between generations.

“My predecessor as student body president was kind of revolutionary and stirred the pot,” he recalls, noting that the 1960s was a time of turmoil on many campuses. But that approach had not sat well with WPI’s then-president Harry P. Storke, a retired U.S. Army lieutenant general and former NATO commander who was used to a certain way of doing things.

“I was interested in achieving some goals,” Woog says, “and I saw a little bit of my father in General Storke. We were able to build a relationship, and I developed the capability to talk with someone with tremendous respect, but also with a difference of opinion.”

Those goals included creating a social life for students beyond the fraternities, and it was Woog’s idea to create a student social fee, charged by the semester, that would allow WPI to bring big-name musical acts to play in the newly opened Harrington Auditorium. It passed by student referendum. He also lobbied successfully to loosen the rules around female visitors in the dorms, and he helped abolish an unwritten edict that Jewish students could only join a special Jewish fraternity.

“General Storke and I had an ongoing dialogue about how students were feeling, as opposed to just us being dictated to,” he says. “I remember we talked about drugs, we talked about leadership, we talked about other things. My predecessor had done the strikes and the activism, which raised awareness that things had to change. I was able to take advantage of that momentum to actually make things happen.”

An ability to make things happen would serve Woog well after graduation. He was hired as an engineer at AT&T, where he met Barbara Jean—“an extraordinary woman,” he says, “an African American woman in a professional career when that was a difficult thing to be.”

The Woogs accepted the assignment in Tehran partly because they were seeking a fresh start, away from the uncomfortable attention that came with being an interracial couple at that time. They were happy there, but tragedy struck soon after they returned to the United States. For several years, Barbara Jean had suffered from a rare disease, sarcoidosis, which flared up intermittently. Three months after they returned to the United States, a final flare-up proved fatal. Bob threw himself into work, while his daughter stayed with her grandparents and her nanny, Ligaya, an immigrant from the Philippines whom Barbara Jean had grown close to in Tehran and persuaded to return with them to the United States. After a few years, he fell in love with the woman who had served as a surrogate mother to his daughter.

“To make a long story short,” he says, “we decided to get married, and we had two more kids. Now we’re a triracial family.”

Meanwhile, he was pursuing a project at work that would have broad implications for AT&T—and the entire world.

“When I came back from Iran, AT&T said to me, ‘We heard this thing about using computers in the office environment. We don’t know if we should be for or against it,’” he says. “They asked me to research that.”

Woog recruited a psychologist and a sociologist for his team, and they studied various AT&T departments’ reactions to the new technology.

“First of all, we found executives were totally intimidated,” he says. “They would agree to let their secretaries have it, because typing was ‘a lady’s job’ in those days—in fact, later we had to invent the term ‘keyboarding’ so that it wasn’t typing. The whole thing took time. Some people wanted it so they could look progressive. And for workers who were geographically dispersed, it started to make a lot of sense, particularly for those in sales.”

"Bob is a true diplomat, whether in government meetings, with national telecoms companies in Europe or Asia … Bob always stayed calm and professional,
a soft-spoken giant."

Out of Woog’s research came the first corporate electronic mail system, implemented throughout AT&T. He also wound up on the speaking circuit, addressing leaders of other Fortune 500 companies about AT&T’s new system. Traveling around Silicon Valley gave him the itch to strike out on his own, joining a friend to start a microwave- based long-distance service company, Digital Transervice.

“Technically, we made it work, and I was very proud I was able to do that,” he says. “But the sales couldn’t keep up with what was estimated in the business plan. That was the first start-up venture—which failed, but we learned a lot from it.”

Woog landed on his feet, and soon he was running operations and engineering for IX Net, another start-up that sold special telephones for high-volume stock and bond trading. The job took him around the world—from New York, London, and Paris to Singapore, Sydney, and Tokyo—as he worked to convince local governments to grant regulatory approval.

Stephen Prendergast, who worked for the company in London in the 1990s and still counts Woog as one of his most important mentors, often came along on those trips.

“From the start, Bob was an inspiration and mentor to me,” he says. “We met with some tough negotiators as we tried to do deals and get our business off the ground. Bob had a knack of seeing both sides of the deal. He had a great way of negotiating; he would almost join the ‘other side’ and sell back to himself.... Bob is a true diplomat, whether in government meetings, with national telecoms companies in Europe or Asia, or even with some ‘dodgy’ characters. Bob always stayed calm and professional, a soft-spoken giant. He had real presence and ability to move the conversation in his direction.”

Once again, Woog’s ability to connect—a skill he had first honed at WPI—proved as useful as his technical expertise. The start-up was a huge success, selling for $3.3 billion in 2000.

He was comfortable, and might have begun to consider an early retirement, but by now the Internet was becoming the world’s primary mode of communication, and he realized what a good connection could mean for a community, whether a mid-tier American city or a developing country. Under the banner of his own company, Transcom, he launched ventures to unspool fiber optic cable around the world.

The efforts did not always work out as planned. One ambitious scheme would have extended submarine fiber optic cable from Portugal to South Africa, linking all of West Africa. For seven years, Woog traveled the continent, speaking at conferences and talking to governments as he worked to stimulate interest. While his group did not secure the necessary financing, the evangelism helped, as others picked up the concept and built a number of cables along Africa’s coasts.

“Everything changes when you bring broadband into a country that didn’t have it before,” he says. “I’m really inspired by my kids—I’ve watched how they’ve embraced technology. My oldest started out with emails and instant messaging. My son, who now works in television, is much more into video. My youngest made a career out of social networking for movie studios. In other countries, where they’re significantly behind because the infrastructure hasn’t been built, I look at the young people there, who are just as wonderful and intelligent as anywhere else. If they don’t have broadband, they can’t compete on the world stage for jobs. That’s what drives me.”