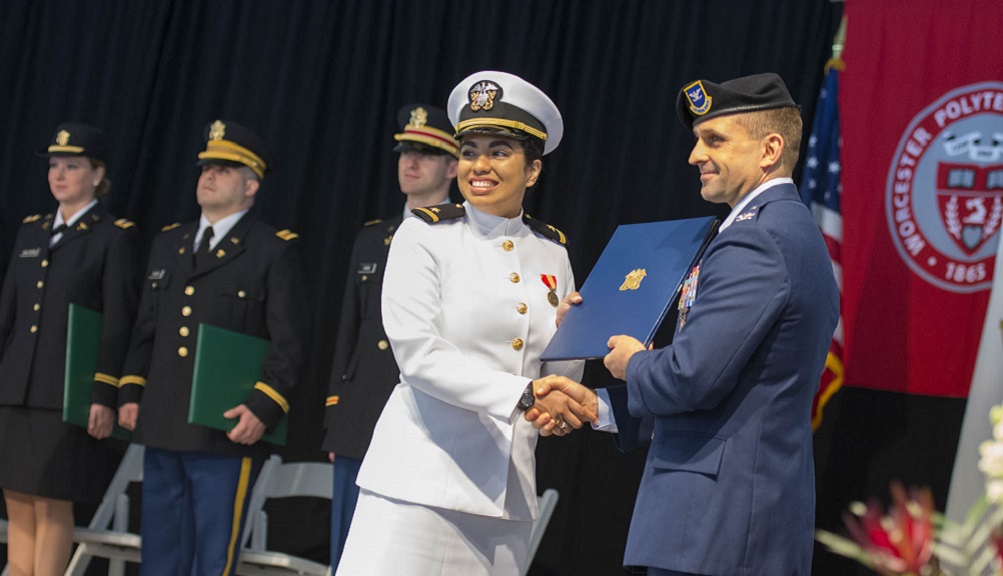 In the second of four Commencement ceremonies held on campus this past week, cadets from WPI, College of the Holy Cross, Anna Maria College, University of Massachusetts Lowell, Fitchburg State University, Worcester State University, and Becker College were commissioned as officers into the United States Army, Navy, and Air Force. Some 15 of the new officers were WPI students.

French began his opening remarks by stating his appreciation for the commissioning ceremony being joint service, explaining that the way soldiers go to war is fundamentally in joint fashion, and that it’s an appropriate way to start off what are sure to be promising careers.

The cadets’ dedication to perfecting their crafts and working to become tactically and technically brilliant were stressed as imperative by French, but he was quick to add that they can’t stop there.

“It’s not enough to master your craft, to be the best at driving tanks and ships and planes … we have no room in our military establishment for brilliant jerks,” he said. “Our profession demands that we possess skill and discernment, skill and compassion, skill and caring enough about the other people that you serve with to go out of your way to support them, but also to hold them accountable and challenge them to be better than they are today.”

The cadets have spent the last four years in between the identities of civilian and military officer, something French understood through his own experience; a portion of his remarks offered a glimpse into their futures. “It’s not an easy road to travel. It’s not going to lead to monetary wealth and it’s full of uncertainty, but I can promise you that you’ll work with the most remarkable people in America, that you will grow literally every day, and that your life will be full of purpose.”

Following the recitation of the Oath of Office taken by the cadets, family members had the opportunity to participate in the “pinning” portion of the ceremony, a longstanding military tradition where a higher rank is placed on the new officers’ uniforms for the first time.

After the pinning ceremony came the presentation of commissions and the first salute. Another deep-seated tradition, the first salute consists of each commissionee selecting a veteran or officer currently serving—often a family member, close friend, or mentor—with whom to exchange their first salute as a new officer; the new officer will then offer a silver dollar to their chosen mentor as a signal of deep respect and gratitude.

Samantha Chernin, who graduated from WPI with a degree in aerospace engineering and will become a surface warfare officer in the United States Navy, received her first salute from Cpl. William Shoemaker of the U.S. Marine Corps. “We’ve been close friends since middle school,” she says. “It means a lot for him to be here, and for him to be [my first salute].”

The afternoon was a time for celebration, but many emotions, including worry, were also present during the ceremony, something French took the time to acknowledge. “It takes an entire constellation of support to produce a military officer,” he said, going on to explain that he knew how proud the commissionees’ parents, family, and friends were of the cadets, but that it was impossible not to think about their futures, as well. “I want to tell you, be not afraid. Your children have found meaning and purpose in their lives. They’ve become men and women of character, and as a parent, I don’t think we can really ask anything more than that.”

Before the pinnings and first salutes, French wrapped up the ceremony with a simple gesture of heartfelt gratitude. “I am deeply grateful for your willingness to commit to something that’s so much larger than yourselves,” he said. “Commissionees of 2017, you are the leaders we’ve been waiting for.”