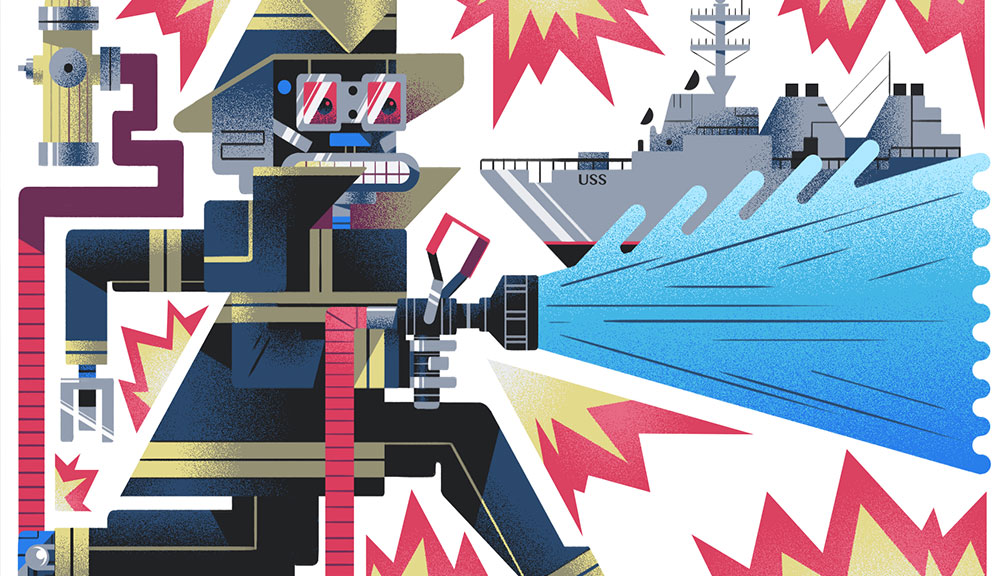 A  robot developed to fight fires on Navy ships, SAFFiR, still needs to refine its moves. Working in the constrained quarters of a Navy submarine is not so easy for an autonomous humanoid robot like SAFFiR hort for Shipboard Autonomous Firefighting Robot), which is not controlled by teleoperation. Navigating tight corners, for example, or staying upright on rocking decks requires exceptional motion control. “These robots are not good at locomotion in complex environments right now,” says Dmitry Berenson, assistant professor of computer science and robotics engineering at WPI. Berenson recently received nearly $600,000

from the Office of Naval Research to develop motion planning algorithms for the firefighting robot built by Virginia Tech engineering students. The project has also been supported by University of Pennsylvania and Carnegie Mellon University robotics teams.

SAFFiR stands 5 feet 10 inches tall, weighs about 140 pounds, and is equipped with stereo camera, thermal imaging to see through smoke and detect heat, and laser rangefinder for accurate mapping. “By using autonomous humanoids, we’re hoping to reduce the need for Navy personnel who have to perform a whole host of tasks and to also help mitigate the risks to people in fire suppression scenarios,” says Berenson.

WPI is testing its algorithms with a virtual model of the SAFFiR robot. Later this year, the WPI team will test its algorithms in the actual robot in controlled conditions within a ship environment mock-up at Virginia Tech. The robot will walk up stairs and perform other locomotion tasks to ensure the algorithms are generating the correct motion. In a later phase of the research, the robot’s capabilities will be tested again aboard the USS Shadwell, a decommissioned U.S. Navy landing ship docked in Mobile Bay, Ala. Joining Berenson on the WPI research team are Will Pryor ’16, grad student Yu-Chi Lin, and postdoc fellow Andreas Orthey.