WPI professor Nikhil Karanjgaokar conducts an experiment to observe how waves move through granular materials immersed in liquid, which could be used for shock protection.

From Sea to Space: WPI Wave Motion Research May Lead to Shape-Shifting Material That Will Provide Shock Protection to Soldiers, Police, Missile Silos, and Satellites

This new class of granular materials should provide shock protection from a projectile, such as a bullet, to safeguard police and military personnel

An aerospace engineer at Worcester Polytechnic Institute (WPI) is conducting wave motion research to one day create a bulletproof vest that not only will sense the speed, angle of approach, and size of an incoming bullet, but the material inside the vest will instantly change properties to provide greater shock protection at the exact point of impact. These materials could be used in protective gear, and to create protective covers for buildings, satellites, and underwater missile silos. The pioneering work is being funded by a five-year, $500,000 Faculty Early Career Development Program (CAREER) award from the National Science Foundation.

Nikhil Karanjgaokar, assistant professor of aerospace engineering, is using his expertise in wave motion and interruption to explore the mechanical and physical properties of granular materials that can alter their shapes or change their original properties to absorb and redirect the force of an incoming bullet or object. Karanjgaokar hopes to develop shock protection technology that can protect people and objects from being pierced or affected by the shock from projectiles. The technology could be used in personal protective equipment, such as vests and helmets, that can be worn by the military, police, and other professionals, like athletes and construction workers. The technology also could be used as a protective covering for buildings or even to protect NASA’s International Space Station, satellites, and spacecraft from being damaged by space junk and meteorites.

“I want to design materials that can absorb impact,” said Karanjgaokar, whose previous research was focused on understanding wave motion through granular material. “People trying to protect themselves from bullets or shrapnel have used sandbags since before the Second World War to absorb impacts. I’m working from the same basic principle. How can we create a versatile material to create a barrier against any impact?” 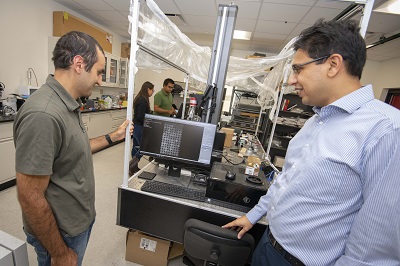 Karanjgaokar will focus on the effect of interrupting or diverting wave motion. He said to think of the force of a bullet’s impact as surface waves moving across a pond. Impact waves, and the power behind them, move similarly through any collection of unconnected particles that are the same size, shape, and material. But if the particles inside hazard protective gear could change their internal structure in the area of an incoming impact, they could disrupt the direction, speed, and force of the wave away from the person wearing the vest or helmet.

“The idea is that we want the forces from an impact to die down by the time they reach whatever is being protected,” said Karanjgaokar, who explained that a sensor, which is not part of the research project, on the vest or covering would detect an incoming projectile and trigger a change in the materials inside it. “In order to do this, one strategy I’m exploring is introducing obstacles amid the grains in the vest to divert the impact waves so they are stopped or diverted away from what we are trying to protect.”

To make that happen, Karanjgaokar starts with granular materials, which would fill a bulletproof vest or helmet, for example. The materials would start out with the same properties—the same size, shape, and density. He then changes the properties of the granules in a specific location with electric or magnetic fields, causing the materials to respond. For instance, electroactive polymers change their size and shape when stimulated by an electric field. When the field is turned off, the material returns to its original state. He is experimenting with making the materials larger, and stiffer or softer, such as rubber instead of hard plastic. The modified particles act as an obstacle to the wave created by the bullet’s impact, and disperses it so the person being protected doesn’t feel the full impact, providing shock protection.

I want to design materials that can absorb impact.
Nikhil Karanjgaokar
Assistant Professor of Aerospace Engineering at WPI

Karanjgaokar’s research uses both dry granules and submerged particles and a variety of methods to alter them. For dry polymer particles, he uses infrared lights, on a grid behind the grains in the vest, to heat the granules in the specific area where the particles need to be changed. As the granules heat up, they become softer and more like rubber. When the infrared light is switched off, the granules cool and regain their original properties.

For his second effort with altering granules, Karanjgaokar submerges the particles in a fluid, usually an oil. When a magnetic field is applied, the fluid greatly increases in viscosity to the point of becoming a viscoelastic solid, with characteristics of both a liquid and a solid. The viscosity affects the granules, squeezing them together, making them more rubbery. The viscosity would be changed in specific patterns to dissipate the impact waves of a bullet or shrapnel hitting in a certain area. When the magnetic field is turned off, the liquid goes back to its original state. Wet granular materials dissipate energy even more than dry materials.

According to Karanjgaokar, both the dry and the submerged materials could be used in personal protective equipment, such as vests.

“This should provide protection from a projectile, like a bullet,” he added. “It would reflect the energy of the bullet so it would not reach the person wearing the vest. You wouldn’t feel it as much. It shouldn’t rip a hole in you.” This would mark a significant change from today’s bulletproof vests, which do not completely protect the wearer from the impact of a bullet.

Part of the researcher’s work will look at how changing granules in different patterns affects the way the impact waves are dispersed. For instance, how would the wave dispersion differ if the patterns are created in a straight line versus if they are bunched together? One question Karanjgaokar will try to answer is whether multiple areas of granules need to be modified to absorb or reflect the wave after it’s already been deflected by the first pattern. This information also would help him optimize the system to handle multiple impacts of different speeds or coming from different angles.

Karanjgaokar noted that depending on the speed and direction of the incoming bullet, protective gear would need to be able to create different types of patterns. “You can’t use one pattern to protect against all types of incoming projectiles,” he said. “Depending on the size, direction, and velocity of the projectile, you would need a different pattern to absorb or disperse an impact.”

To do his work, Karanjgaokar will collect experimental data, such as information on displacement and velocity of individual grains during the wave propagation—all captured using high-speed imaging at 50,000 frames per second. That data will be fed into algorithms to calculate the interparticle forces needed to divert the impact energy and to better understand how energy moves through the system. He also will be running images taken with high-speed cameras through pattern-recognition software to figure out how structures deform as projectiles hit them, and then he’ll analyze his results using data processing.