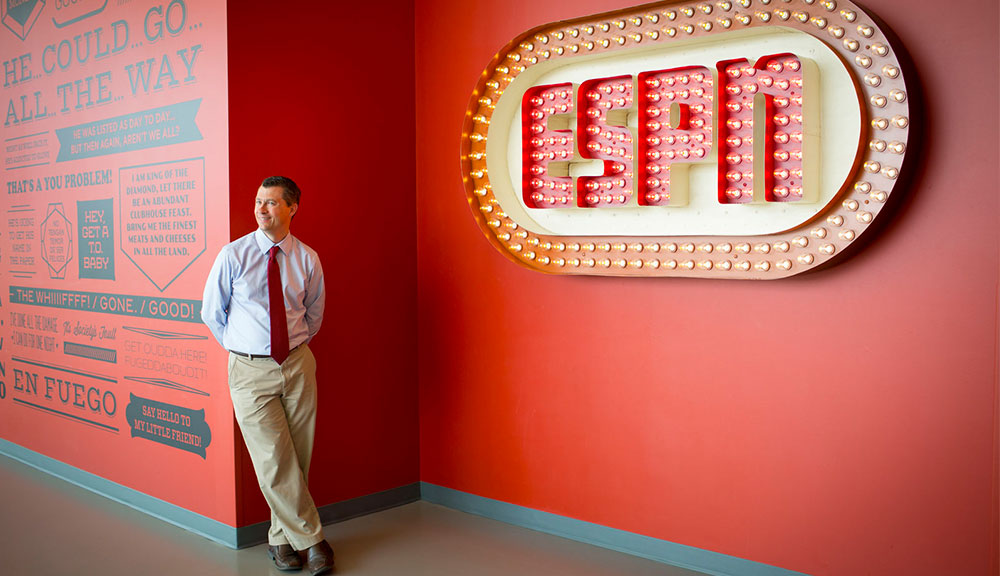 The Stats Behind The Story

Jeff Bennett ’94: How a passion for numbers turned into a new language of sports

Bennett, now ESPN’s vice president of stats and analytics, has led the best of professional lives as his personal and professional passions merged seamlessly into a kind of vacuum he was privileged to fill as he saw fit.

Birth of a Network

Once upon a time, sports news on television was simple. There were three local channels and each broadcast the news at 11 p.m. for a half hour, devoting a few minutes to sports news toward the end.

Highlights were sparse and delivered by loud men in loud blazers who covered only the important stats: how far Yaz hit that last homerun, how many touchdowns Steve Grogan threw on Sunday and to whom, how many three-pointers Larry Bird drained in the last Celtics game.

But in the early 1980s, an upstart sports network improbably headquartered in Bristol, Conn., began changing how America— and, eventually, the world—did sports, altering forever the way fans experienced games on TV.

It was also the dawn of an era when an elite group of sports observers began chronicling a hidden game located beneath the veneer of who did what and when. It was a world where the stories were told with numbers.

Certain sports statistics—for example, RBIs and the ERA in baseball and yards thrown per game by a quarterback—had long been valued above others and adopted in the vernacular of the sports argument as self-evident truth worthy of prima facie acceptance. These highlights were the thrust of the story being told.

The arrival of ESPN brought the sports highlight to a heretofore unknown prominence, and led some on the fringes of sports— observers willing to question the status quo—to wonder if they’d been following the wrong stats all along.

Around the same time and not far from Bristol, in the small mill city of Willimantic, Conn., Bennett—a young sports fanatic with a penchant for numbers and a near-obsessive need to memorialize Wiffle ball games in stacks of data—was unknowingly charting the course of his future career, in a field that barely existed at the time.

“My childhood was grounded in sports statistics,” Bennett remembers. “I learned from the backs of baseball cards. I kept the records of backyard Wiffle ball games and Strat-O-Matic games, then translated them all to my Commodore 64. Not long ago, we found reams of score sheets in my mother’s attic.”

That passion for numbers led him to pursue a degree in applied mathematics at WPI (“My high school calculus teacher would probably be surprised to know I majored in math,” he jokes).

Bennett was a member of the WPI wrestling team, something he remembers with immense pride. “I’m proud of my small role on some championship teams,” he says.

In 1994, while doing a post-graduation stint as a furniture mover, he heard about a job in the then-unhallowed halls of ESPN; he landed the part-time position as an archivist for the network’s iconic SportsCenter program. It was an auspicious time to join ESPN, which was just beginning a steep upward trajectory, as a corporation and as a cultural touchstone.

But while the network may have been leaping ahead, the technology Bennett found in his workplace was decidedly retro.

“It’s a job that doesn’t exist anymore,” Bennett says. “It was a three-person department, and we were in charge of the tapes used by SportsCenter. Everything was on Betamax and was catalogued by barcode in this incredible library. Back then they would re-use the tapes, so we would have to decide which games were important to keep—which highlights we needed to hang onto.”

He says the job helped him build a reputation at the network as hard-working and knowledgeable within a wide variety of sports. Early on at ESPN, Bennett set a goal for himself.

“My dream job was researcher on Baseball Tonight,” he says, referring to ESPN’s tentpole nightly baseball program. It was a goal he achieved in 2000 after four years in a similar overnight role for SportsCenter.

Bennett’s work in that role was some of the most satisfying of his career; the satisfaction included four Emmys that he shared for his contributions to SportsCenter.

At the same time, the network’s growing roster of shows needed real-time statistics, trivia, and similar spontaneous bits of ephemera that sated the viewers’ new thirst for information.

It was a digital idea in a decidedly analog world. Researchers were expected to add depth and context to games and highlights via numbers and statistics, all without Google or the Web, which were both in their infancy.

The pace was unrelenting. The job of a researcher is, at least in part, to give the on-air talent interesting things to say. It’s about making connections on the fly, and then packaging those connections in visually interesting ways on the slimmest of deadlines, usually live and with no safety net.

“Every day you came in and had to be original,” he says. “Baseball is completely unpredictable, and you needed to think about interesting things to say before people even realized they were interesting, while trying to be one hundred percent accurate.”

Bennett approached the job much like a jazz musician, riffing off the ebb and flow of the live broadcasts, and knowing that “pretty much anything I wanted to get on the air, I could get on the air.”

One of his proudest achievements was the popular and long-running Did You Know? segment on SportsCenter, a daily sports trivia question culled from Bennett’s vast trove of data and sports information.

“It was exciting because you’d hear people talking about something I’d gotten onto the show.” On Baseball Tonight, he specialized in bringing perspective to the games by feeding stats to the various hosts while the broadcasts were live—no easy feat, considering the stats themselves are a kind of holy writ for ardent fans.

Bennett now works primarily in a management role, finding the people to do the creative things he once brought to live television. But he clearly relishes the memory of those bygone days. “In a lot of ways, I feel like I’ll never be better at anything than I was at that,” he says wistfully.

It probably isn’t too surprising that Bennett, whose family started and owns Willimantic radio station WILI (1400 AM), would find a way to combine his love of sports, numbers, and broadcasting into a career.

What he couldn’t have planned, though, was the congruence of his career search and the transformation of sports statistics from just something to argue about at the bar or over Thanksgiving dinner into a narrative device, a new kind of lens through which athletics can be viewed.

And it all begins with numbers —statistics that, as Bennett says, go deeper.

“We’re always looking for deeper data,” he says. “Deeper data slices that tell  you more about the why. We want to deliver more than what traditional box scores tell you, but in a truly deeper way. It should be more than just a meaningless slice of information.”

Ever since Michael Lewis’s book Moneyball (and the movie based on it starring Brad Pitt) brought the arcane world of sabermetrics to the mainstream, sports statistics have increasingly encroached on the viewing experience. They have been used to bring perspective to an endeavor—the sporting event— that traditionally has had little to offer.

In baseball, sportscasters now toss around terms like OPS (on-base plus slugging) and WAR (wins above replacement). The former is a measurement of a player’s ability to get on base and also hit for power, while the latter (which has implications on more than one sport) represents a player’s value over a hypothetical average replacement; it’s meant to quantify a player’s contribution to the team. Hockey has begun tracking puck possession and unblocked shots.

Bennett and his team are responsible for two of the most important additions to sports analytics in recent years: the Total Quarterback Rating (TQBR) in football, and the Basketball Power Index (BPI).

TQBR is a mathematical nod to the fact that not all quarterback plays are equal. A 50-yard completion in the last seconds of a lost game is not necessarily superior to a five-yard touchdown pass that wins the game at the end of regulation. TQBR is a means of offering perspective, a way to illustrate that some plays are better than others. It’s a tool for cutting through the hype of a QB who may have gaudy but largely irrelevant stats.

The BPI measures team strength. By integrating game-by-game efficiency, the difficulty of the schedule, pace, and day of rest—among other factors—it calibrates to what degree a  particular team exceeds or lags the league average at any given point in the season.

Today’s sports broadcasts, no matter the platform (television, tablet, online streaming), are wrapped in an analytical package of immense sophistication and responsiveness.

And Bennett says ESPN will continue to bring its analytics prowess to those broadcasts, wherever they migrate—a not-unimportant point, considering that ESPN’s finances have taken a hit as part of the wider erosion of cable television’s economic model.

“It’s a tricky time,” he concedes. “There’s a lot of disruption right now. In the cable industry, there’s some subscriber loss, but at the macro level, we’re so much more than cable TV. We’re looking to adapt, bring more value to the contract. Statistics offerings are a huge part of that.”

So even as more and more consumers cut the cable, Bennett says ESPN will be able to meet them wherever they go.

“We’re a platform-agnostic sports information service,” he says. “Storytelling with insight and creativity. That’s what my team does.”

A recent study by market research firm ReportsnReports.com found that sports analytics, of which Bennett’s group is on the leading edge, was a $125 million-per-year industry in 2014.

By 2021, that figure is expected to be $4.7 billion. It’s a far cry from Bennett’s days as a researcher, when he depended on printed media guides and reference books and his ability to quickly navigate them.

These days, the statistics that scroll during games, that are included in highlight packages, and that fuel the company’s multitudinous fantasy sports offerings, are driven by algorithms, bringing a high level of automation to ESPN’s offerings.

But the backbone of the enterprise is still the staff of full-time researchers (augmented by ad hoc help during especially hectic periods) who fill the group’s computer terminals during live sportscasts and other shows. The team monitors online databases and analyzes statistics reported from outside services in real time, trying to anticipate the on-air talent’s needs so they can seamlessly deliver the perfect factoid or just the right graphic. Moment by moment, they test the waters for a narrative hook that will add value and interest to the broadcast. It’s an artistic blend of math, psychology, and high-wire act, all performed at high speed.

Bennett and his group are always on the lookout for new ways to collect the data they need to better tell the story.

Among the most promising innovations are wearable player-tracking devices that will help the researchers better understand how a player’s actions away from the ball—or puck—contribute to his or her success, or failure.

“Among other things, this will help us recognize whether a player made the right play,” he says. “Analyzing gets more toward fit, and spacing— that kind of thing. Did Bird make the right pass? Was Kobe making a harder shot than the other players?”

At the end of the day, Bennett knows his stats and information group needs to offer a kind of intelligence, no matter where the ESPN flag flies (cable, digital, online).

“People coming to us want us to be smart and different. That’s what they expect.” 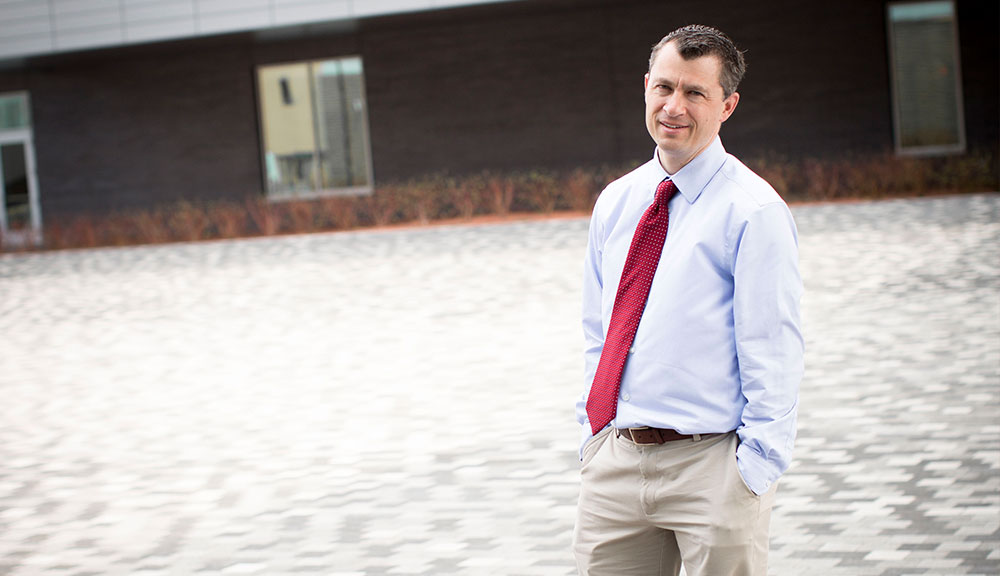 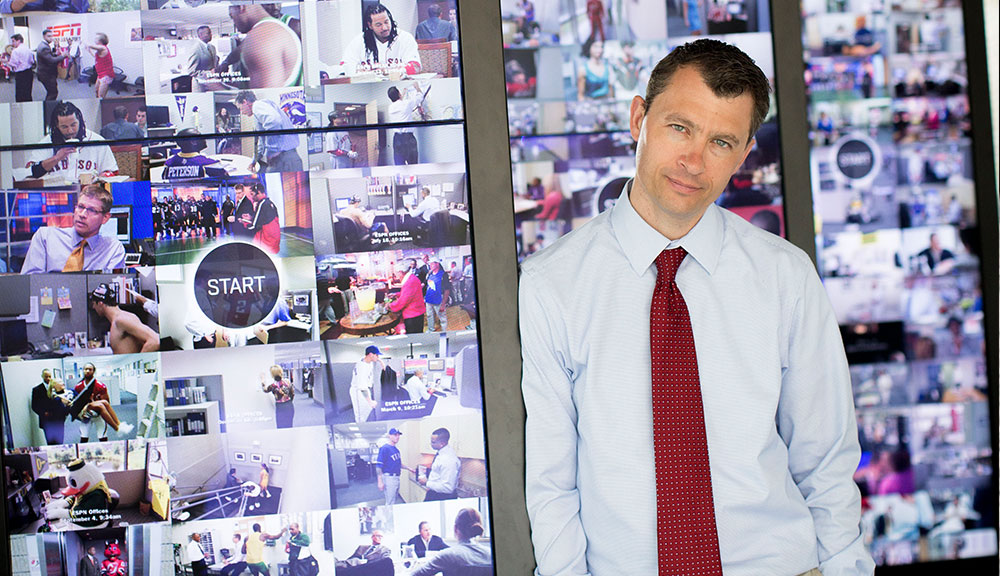 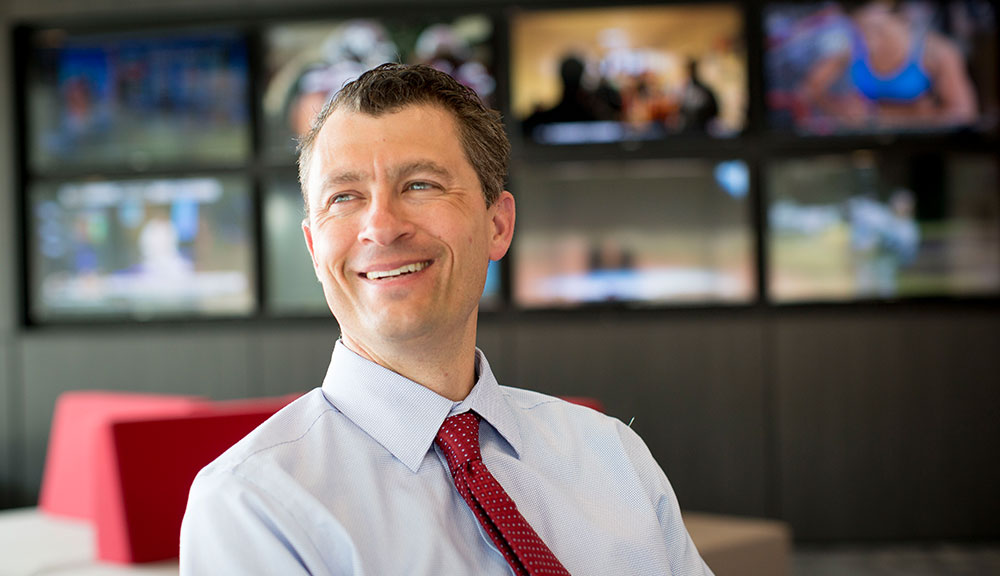