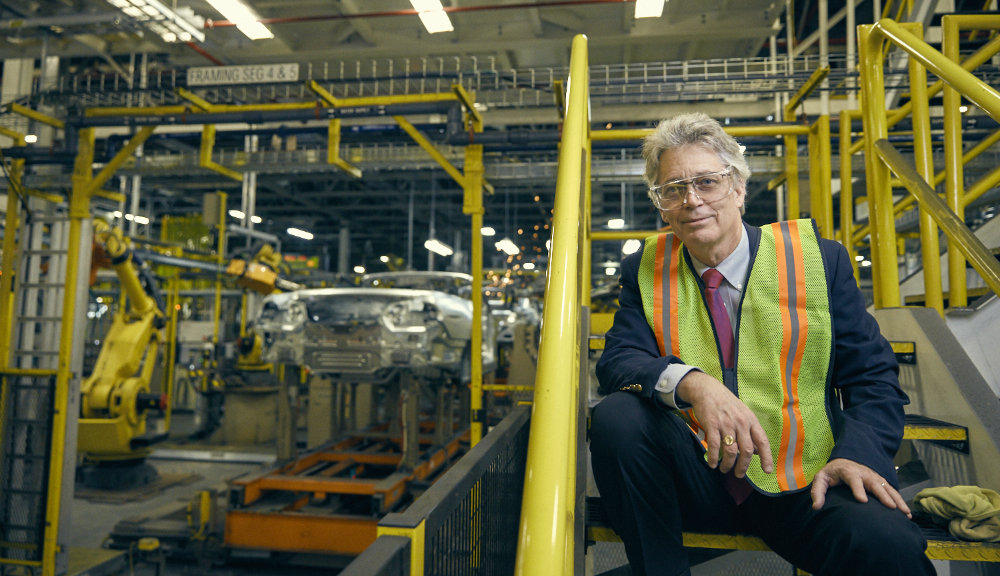 Turbocharged: One Man’s Mission to Save the Mustang 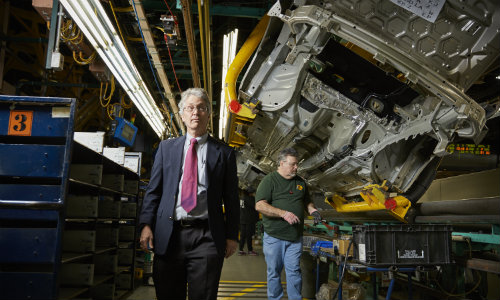 As a 5-year-old growing up in Winchester, Va., Arthur Hyde ’77 sat in his front yard and recited the makes and models of cars that drove past his family’s white, two-story brick Colonial, among them Packards, Chevys, Fords—even the ill-fated Edsel, which had just hit the streets.

Hyde’s passion grew as he continued to watch the motorized cavalcade roll through the town famous for changing hands 72 times during the Civil War.

Then, in the summer after third grade, came the moment that changed his life. It was at the 1964 World’s Fair in New York City, where a new creation, the 1965 Ford Mustang, was unveiled to the public. Named after the famous World War II fighter, it had a base price of $2,300.

“I was so excited about seeing the Mustang,” Hyde says more than five decades later. “Of course, there was a long line to see it. I waited with my brother while the rest of our family went around to different things.”

Ninety minutes later, the giddy brothers finally crawled inside the Guardian Blue convertible’s vinyl sanctum. The car, suspended above a pool of water, took the boys on a short, automated ride in the Ford Pavillion. For Hyde, the moment was indelible—even sacrosanct.

“I was completely hooked,” he says. “From that point, I decided that the only thing I wanted to do in my life was to be a chief of Mustang.”

And he would be. Not only did Hyde lead Mustang as the iconic brand’s chief engineer from 1998 to 2002, he’s credited, moreover, with being the guy who saved the car from extinction after sales and profits declined due to growing company indifference about its fate. The model, as Hyde puts it, had “lost its way.”

Hyde never wavered from his plan to take Mustang by the bridle. At WPI, he called and wrote to Ford’s then-executive engineer, Bob Alexander, a dozen times. The queries went unanswered. But Hyde wasn’t deterred. He found a Ford annual report and looked up the names of other company executives. He wrote more letters.

Someone finally took notice and Hyde ultimately scored an interview with Alexander, himself, who was impressed enough with the young engineer to give him a job that, in part, required him to work on turbo-charging the engine of the Mustang that was to serve as the 1979 Indianapolis 500 pace car.

He was the perfect guy for the job. At WPI Hyde conducted research on automotive turbo-charging—increasing an internal combustion engine’s efficiency and power output by forcing extra air into the combustion chamber. For his MQP, he explored the impact of turbocharging on fuel economy and emissions.

But his ultimate goal took some time to realize. That dream came true in 1998 when Hyde became Mustang’s chief program engineer. These days, Mustang fan groups regard Hyde with rarified esteem.

The Mustang Club of America (MCA) inducted him into its hall of fame in 2002 for saving the car. “It’s a huge honor,” Hyde says. He served on the MCA board of directors from 2000 to 2004. During those years he penned a monthly column in the club’s magazine, Mustang Times. 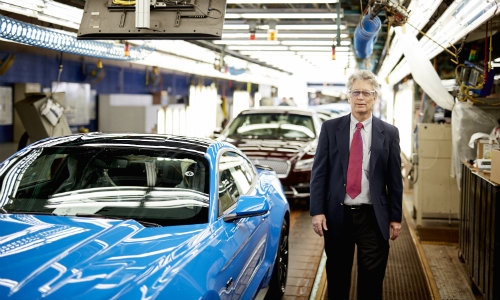 Forty years on, Hyde is still at Ford’s Dearborn, Mich., headquarters. He’s been the only engineer to helm two Mustang programs—SN95 and S197—that produced the car’s fourth and fifth generations.

“Anybody who’s ever been the chief engineer of a Mustang is held in a different regard. These guys are like rocks stars,” says John Clor, who, as Ford’s Enthusiast Communications manager, serves as the company’s liaison with 350 car clubs around the world, most of them Mustang-related. “Art was the first person in the company to understand the passion of clubs and what they could bring to the development of the car.”

After leaving the Mustang program in 2002, he resumed his previous role as chief engineer for Ford’s global product development system. “Fundamentally, I’m responsible for making sure every program is on time and that it’s not consuming too many engineering resources,” he says. “We want to hit that budget.” This year he’ll travel twice to China, Brazil, and Australia. His itineraries include four stops in Europe, and another in Japan.

Hyde also is an adjunct professor at the University of Michigan’s College of Engineering, where he teaches systems engineering and program engineering. He’s taught in Ann Arbor since 2001, at the invitation of the department.

Building cars involves “a very critical set of skills that we want to give our students,” says Panos Papalambros, chairman and professor in the college’s Division of Integrative Systems + Design. “You cannot replicate that in school, but you can prepare them so they can be ready for the experience when they go to work.

Art has been instrumental in getting this done right. He’s very meticulous in what he does, and he’s a  good conduit to connect students with Ford engineers who might be looking at placements.”

When he hired new college graduates for Ford, “I was disappointed that we were getting these students who really didn’t understand systems engineering,” Hyde says. “They didn’t understand how to trade off things like cost and function, like crash safety and ride and handling. They knew how to do stress analysis, which was great, but they were not able to look at the vehicle to the extent I thought they could have. I felt better prepared coming from WPI than some of these other people.”

A fellow alumnus—Jamie Forbes ’88 (’90 MS), recruited by Ford from WPI in 1990—was initially hired to do noise and vibration research. For a time he worked with Hyde on the Mustang, but he’s since become manager of interaction and ergonomics at Ford, perfecting everything from cup holders to video screens. Working on the Mustang is the envy of most employees, Forbes says. “If you get to work on Mustangs, you must have done something right.”

But Hyde is driven by more than reverence for the brand, Forbes adds. “Art is a responsible engineer. There’s a huge social obligation when you design a vehicle that can kill people.”

Hyde is considering retirement, but there’s still the spirit of that car-loving 5-year-old reminding him that some passions never die.

His turbo-charged journey, he notes, had a critical stop at WPI: “I would never have been able to do what I did if I had not had that experience. My MQP advisor was Roger Borden, who used to say stuff like ‘crawl in the mud and get dirty with the pigs.’ It was just one thing after another that you had to work through. Professor Borden kept me calm and focused through all the challenges. It was a fantastic experience.”

Hyde was as much a grease monkey as a student during his Worcester days. He canvassed the city and the campus, leaving business cards on windshields advertising his skills as a mechanic (something he began doing in the seventh grade). He particularly enjoyed working on British sports cars. 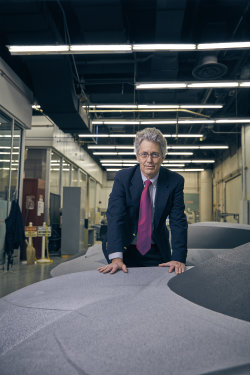 “The card said, ‘Need work done?’ and I knew that the answer was ‘yes,’ because it’s a British sports car, after all,” Hyde says, noting that he did most of his repairs in WPI parking lots. “I also worked on Volkswagens, Volvos, and Porsches. Frankly, it was pretty demanding, but it gave me enough spending money to get through the month.”

As for his own wheels, he drove a brown 1970 vinyl-top Ford Capri during his college days, in which he installed a racing-style Formula Ford engine. He pined for his dream car, but his father had forbidden him to get a Mustang because of hefty insurance costs.

“He wasn’t into cars at all, and he thought it was all stupid,” Hyde says of his father. “But he gave me $100 and basically said, ‘You can have any car in the junkyard.’”

As a middle schooler, Hyde found an old 1966 Datsun 411 SSS, but it was inoperable. In the summer after eighth grade, he hitchhiked regularly to the yard until he got it running.

He somewhat abashedly admits to owning four cars: his daily driver, a Ford Focus ST; a 1999 Mustang that was used for testing and development purposes; a 1967 Lotus Elan (“It’s a British model, right-hand drive, the way it should be”); and, for thrills, a 2015 Shelby GT350R (“It’s a hell of a car!”).

But Hyde doesn’t necessarily find satisfaction in speed and muscle. He’s an engineer at heart.

“I like balance,” he says. “I’m never going to be a great race driver; that’s not my goal. I like managing the physics, where you can feel the weight transfer and you can feel all of the forces. That makes me feel so alive.”

His role with Mustang also tested his political chops, particularly during those days when the Mustang appeared to be a dying breed.

“Ford had a bunch of people who didn’t know what a Mustang was, but they thought they did,” Hyde says. “The mistake I saw them making was thinking they were the customer. They may be caretakers for the customer, but they have to keep grounded on what the actual customer wants. Management didn’t necessarily understand that.” 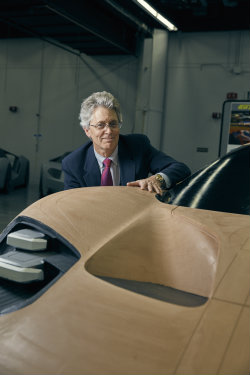 In a controversial move, Hyde launched a program called “immersion excursions,” in which executives and engineers spent a day with Mustang owners around the country. Those owners were given video cameras to film a week in the life of their Mustangs. He says one, a homeless man in Newport Beach, Calif., has stuck with him over the years—his situation showed that Mustangs are more than just four wheels and a chassis.

“He lived between two houses and had a corrugated roof over his head,” Hyde says. “He had a couch, water-cooled speakers for his stereo system, and nothing else. But the guy did have a Mustang convertible, and everything he earned he put into his Mustang. It was hopped up; it was beautiful!

“So what makes somebody do that?” Hyde asks. “Well, they get in and they feel special. This guy didn’t feel special in any other part of his life. He felt like he had been overlooked by everybody, including his family, but this car made him, and it was empowering.”

Now in his 60s, Hyde knows there are legacies to consider as he approaches the end of his long and esteemed career. There is something of the race car driver in his words. “My main motivation is to make a difference in the industry,” he says. “I want people to chase me rather than [having to] chase the competition. If you set the tone and pace, then everybody has to match you.”