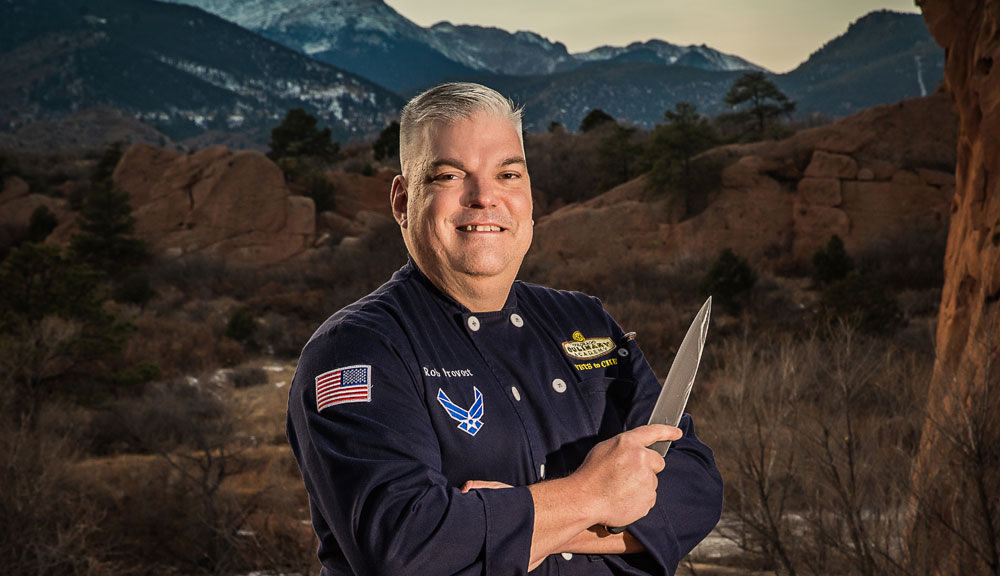 As the eldest of three boys, Rob Provost ’88 (EE) grew up learning to cook for himself and his siblings—especially when their mother returned to the workforce. Throughout his secondary and college years, his kitchen roles ran the gamut from busboy to line cook. Yet it wasn’t until his U.S. Air Force career that he expanded his love for the culinary arts. During those 20 years he gained what he calls “expansive exposure to diverse cuisines and beverages from around the world” as well as all four U.S. mainland time zones.

The retired lieutenant colonel used his robust background in math, science, and engineering, plus the creativity he says was developed while playing small combo– and big band jazz, to coalesce into a gastronomic turning point when he founded Fly
Boys, a private chef and catering business based in Colorado Springs.

“There is no shortage of math or chemistry in a professional culinary program and I thrive on the creativity and experimentation required to test new flavor combinations and plate my culinary creations,” says Provost. Having recently completed professional certifications as a sommelier and cicerone, he explains that “making, tasting, and evaluating fine wine and craft beer requires both art and science.”

Using his Post 9/11 GI Bill, Provost also returned to WPI to take entrepreneurship classes and a few music classes, while his wife, Lt. Col. Cindy Provost, served as the U.S. Air Force ROTC commander for WPI’s Detachment 340 (2009–13). Back on campus, he reconnected with professor of jazz studies Rich Falco and became the first president of the WPI Jazz Alumni Association, creating numerous opportunities for alumni to mentor and share performances with current members of the WPI Jazz Group.

Since then Rob and Cindy have returned to the Front Range of Colorado, where he visits five military bases in the area at least once a month to help veterans with transition to civilian life. He encourages his fellow vets to explore their true passions and, where possible, to pursue a new career using those passions.

Following his own advice, Provost tapped his Post 9/11 GI Bill once again to attend Colorado Culinary Academy, where he met another food-loving USAF veteran. The two paired their love for cooking into Fly Boys in January 2015. Their culinary motto is Honor (ingredients ), Service (exceptional), and Excellence (quality).