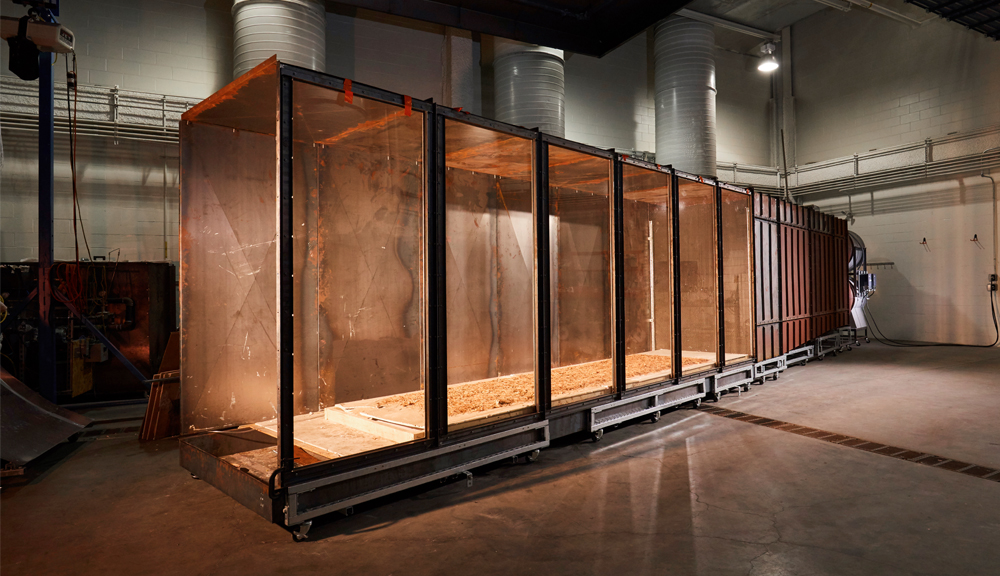 Around the globe, large swaths of the landscape have been charred by wildfires this year, making the 2018 fire season one of the most devastating on record. With a warming climate stretching that season into a nearly year-round phenomenon in some places (the American West is a notable example), the need to understand how wildfires start and spread, how to control them, and how to make structures at the urban-wildland interface more resilient to fire, is becoming ever more urgent.

Under the leadership of Albert Simeoni, whose own interest in wildland fires was sparked by his service as a firefighter in Europe, WPI has become a leader in the scientific study of wildfires. Simeoni directs experimental work that spans a range of scales, from the microscopic examination of pine needles and other wildfire fuels, to small scale burns with these materials to document their combustion properties, to observations of controlled burns in New Jersey’s Pine Barrens. 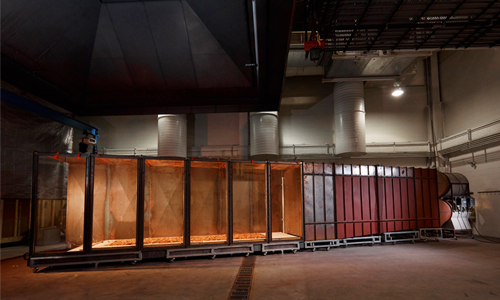 This year, Simeoni and his team gained a powerful new experimental tool: a 41-foot-long wind tunnel that can be set up under the massive hood in WPI’s 2,000-square-foot Fire Protection Engineering Performance Laboratory to conduct carefully controlled burns—essentially simulated wild fires. Designed by Simeoni, FPE professor Ali Rangwala, Seong-Kyun Im, aerospace engineering professor at the University of Notre Dame, and Notre Dame PhD student Giovanni DiCristina, with support from the U.S. Forest Service, the tunnel can also be broken down, packed into a truck, and reassembled outdoors to conduct controlled experimental burns in the field, something that has not been possible before.

The wind tunnel consists of a “diverging section,” where a series of screens and baffles smooth out the wind generated by four large fans, and an experimental section, where fires can be set and the burns observed through 7-foot tall ceramic-glass windows. Instruments, including thermocouples and pitot tubes, collect data on temperatures, heat flow, mass loss, and wind speeds. Research in the tunnel is proceeding systematically. In this photo, the test section is filled with a thin layer of pine needles and leaves, to simulate the forest floor. Simeoni notes that wildfires begin and spread in this ground layer, so understanding the fire dynamics there is essential to constructing accurate models of wildfire behavior. Later burns with shrubs and other vegetation, as well as field studies with the tunnel, will make those computational models more robust and predictive.

The ultimate goal of this work, like most of the fire science research conducted at WPI, is to help create a safer world. By helping firefighters better deploy resources and develop attack plans, fires can be better controlled and more property and lives saved. By gaining a better understanding of the interplay of fire, a changing environment, and the rapidly expanding urban footprint, we can plan better how to live with the ever-present risk of wildland fires and create more resilient communities. “A safer world must be built on a solid scientific foundation,” Simeoni says. “That’s what this research is all about.”