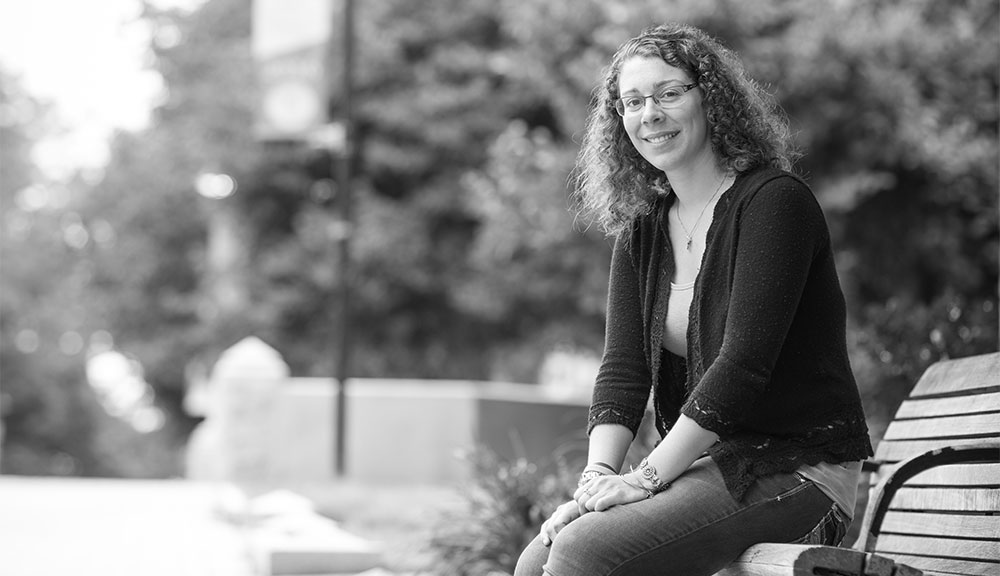 IGERT, for those unfamiliar with the acronym, stands for Integrative Graduate Education and Research Traineeship. This NSF-funded program at WPI focuses on helping PhD students whose research falls under the umbrella of biofabrication, recognizing the commercial aspects of their projects, and establishing an entrepreneurial mindset. For Lindsay Lozeau, it was the instrument that brought her to WPI and her pursuit of a PhD in chemical engineering.

Armed with a BS in chemical engineering from the University of Rhode Island, the 26-year-old says the fellowship was an offer she simply couldn’t refuse. “I didn’t think I wanted to be entrepreneurial originally —or that I had it in me to be entrepreneurial,” says Lozeau, “but I’d never explored it and this seemed to give me that opportunity.”

With one first author publication and another under review, she has given several presentations at academic conferences and has mentored more than 20 students in developing their own projects in the lab. She’s a recipient of two fellowships (IGERT, Hitchcock) and an E-Team grant, and a co-founder of the student-led Chemical Engineering Graduate Organization (CEGO).

If her academic achievements aren’t enough to make her a prime WPI Insider, her entrepreneurial highlights will surely secure her in the role. She is co-founder and CTO of AMProtection, LLC, a spinout of dean of graduate studies Terri Camesano’s lab that focuses on unique antimicrobial coatings to prevent infections of medical devices. AMProtection has received all three stages of the E-team grant program from VentureWell (totaling $25,000) and another $20,000 as a 2016 winner of the Hitchcock Innovation Prize.

In 2014 Lozeau won the “Best Concept” and this year the “Best Overall” and “People’s Choice” awards for her three-minute elevator pitches at i3 (Investing in Ideas with Impact). She also won the WPI Venture Forum’s 5-Minute Pitch Competition.

Her winnings went toward AMProtection technology, of which she is co-inventor with a pending patent. She is also working on the early stages of a provisional patent application regarding another technology she helped develop. This company, QuadraCare Medical, is focusing on ways to help diabetic foot ulcers heal better.

She was funded under an NSF STTR for her PhD project. “This was a great experience, allowing funding for a commercially minded partnership between Histogen Inc. and WPI,” she explains.

When asked what her highlight moment has been at WPI so far, Lozeau says, “I’m getting paid to do research in an area I love, explore my multifaceted interests in chemical engineering and entrepreneurship, mentor students in a way that makes a real difference in their lives, and discover new platforms that have actual commercial potential—how can it not be everything?”