WPI’s Office of Accessibility Services (OAS) Ambassador Jared Grier ’19 suffered a devastating spinal cord injury in 2015, at the end of his freshman year.

For the next year he progressed through multiple surgeries, medical appointments, physical therapy, and a few online courses to return as a sophomore in a motorized wheelchair. Grier has gone on to conquer a path to a mechanical engineering degree with fierce grit and determination.

As he embarked upon this newly refocused journey, he realized that navigating a college campus with a disability is fraught with challenges he'd never considered before. As he contemplated all he had experienced through re-entry to college life with a mobility issue, including the backing of his brothers in Lambda Chi Alpha (who fundraised through a GrierStrong campaign, mapped out a pathway to his classes, and renovated a first-floor bathroom in the fraternity house on Dean Street), he decided to reach out to ODS and offer himself as a resource for those without this built-in support network. 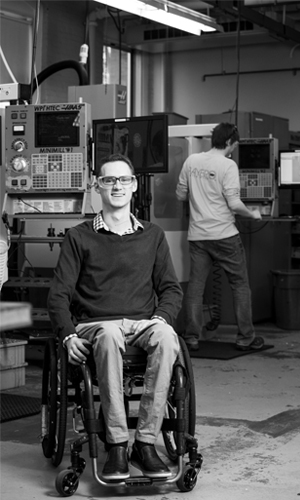 “Jared has been an amazing advocate and is one of two of our inaugural ODS Ambassadors,” says Laura Rosen, director of Disability Support. The new upperclass peer support program helps students better understand what ODS services are available on campus, and helps connect peers with resources. “He has a natural ability to create genuine connections, whether it be through mentoring others or in his role as a Peer Learning Assistant (PLA),” says Rosen.

Grier explains that his presence on campus over the last three years, along with other disabled students, “has helped to normalize disabilities and force the community to be more aware and acknowledge that there are people out there with various levels of ability—but with the right help we can all succeed.”

When he returned to WPI, his focus underwent a slight shift that came with a new viewpoint, as assistive technology and rehabilitation engineering became a fresh topic of interest.

“Having a new perspective while maintaining my inventive and problem-solving mind has given me an advantage that in any issue I encounter I can quickly come up with a solution,” he says. “My acquired disability has also opened up a number of opportunities, such as research projects and panel discussions that previously would not have been available.”

A trait that has served this soon-to-be-alumnus well throughout this experience is his natural drive. “I've come across countless things where I thought I couldn't do it, or was hesitant about trying, but once I did it turned out much better than expected—or I found I could actually do it without any problem,” he admits. “When I began to plan for returning to college I had a number of worries and questions that ended up not being as big of a deal as I thought they would.”

For instance, although he struggled slightly with calculus and differential equations and was leery about his upcoming engineering courses, Grier says he surprised himself time and time again. “I ended up having no issue with statics, stress, dynamics, thermodynamics, or heat transfer,” he gladly shares.

He says he’s ready for what’s beyond the university’s frontiers. With his injury came setbacks, such as the lack of available summer internships that could work for his situation, but he is already thinking about graduate school and applying to companies from coast to coast.

As for advice to others who may see a student on campus with a disability, Grier brings it right down to equality. “At the end of the day we are all just human."