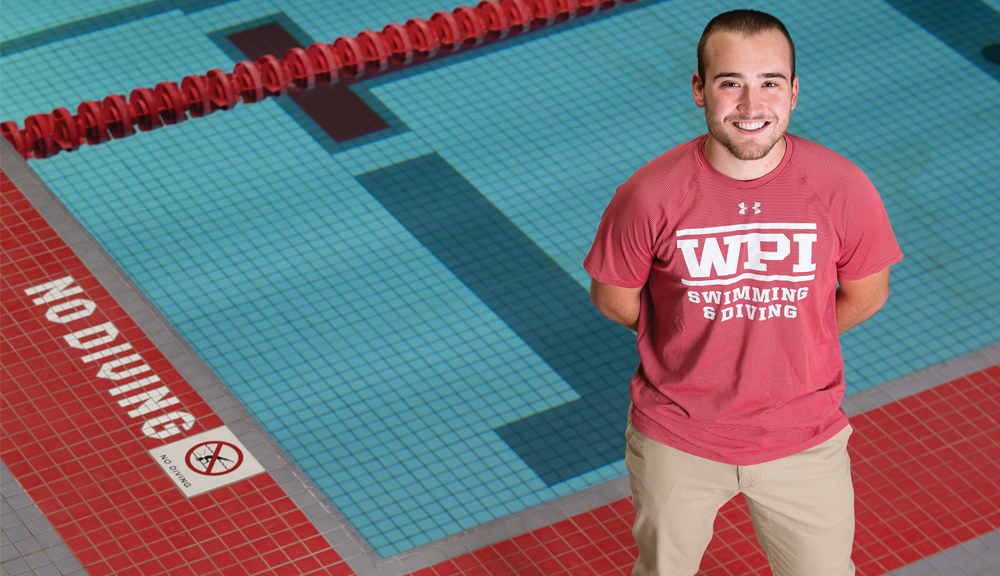 Biology and biotechnology major Joshua Driscoll ’20 says his love of the outdoors led to an early interest in the environment.

“You could frequently find me outdoors hiking, biking, paddling, you name it,” he says. His passion led to an interest in ecosystems, and how organisms play a part to keep environmental communities—including human—functioning. As his awareness intensified, he says he grew concerned about environmental crises that threatened to put all ecosystems at risk.

“When I searched for colleges,” he recalls, “WPI stood out to me with its focus on project work that would allow me to get directly involved in fixing these issues. Although I was not sure exactly how, I trusted I would be able to find this path at WPI.”

That spark ignited during his first year, when he volunteered with Marja Bakermans’ conservation field projects. She in turn introduced Driscoll to Andrew Vitz, her colleague at MassWildlife, who then invited him to volunteer on some of Vitz’s own projects.

“My first summer of field work was amazing, and I was able to work on a number of projects, including a migration tracking project on the Eastern Whip-poor-will, songbird banding in early successional forest, and grassland surveys for the Eastern Meadowlark,” he explains.(Learn more about the research here).

His sophomore year was supported through an internship at MassWildlife with Vitz, continuing his project work, as well as adding experiences in bog turtle tracking and water bird surveys on the harbor islands of eastern Massachusetts. Last summer Driscoll returned for his third season of field work, receiving support from the Explorers Club, as well as The Garden Club of America in partnership with Cornell University, to continue his whip-poor-will research.

In addition to his exciting fieldwork in the states, from March to May 2019 Driscoll completed his IQP with the Port Phillip EcoCentre in Melbourne, Australia. He shares that “through this experience, I was able to see the vast number of volunteer and private sector groups that were involved in this field, and I gained a new appreciation for the multi-faceted approach that is necessary for conservation and land management.”

Upon his return, he sought to increase and broaden his experience by taking part in a research lab with Professor Lauren Matthews on the behavior of crayfish under the threat of predation, and wrote his Inquiry Seminar paper on the history of environmentalism in Worcester. In addition, his MQP will compare land types on the breeding and non-breeding grounds of the eastern whip-poor-will using data obtained from the ongoing migration tracking project.

Driscoll is also a member of the Varsity Swim Team. “Swimming is something I’ve been doing since I was in grade school,” he says. Part of this year’s leadership team, he readily admits that being involved with the team hasn’t distracted from his studies, but rather has made him a more complete student. “Having practices helps me stick to a more rigid schedule, which allows me to complete all my work in a timely manner. Also, the swim team has become my family on campus and without their support I would not have had the same amount of success.”

Grateful for the research opportunities granted him so early in his college career, Driscoll devotes any free time he might squeeze in to supporting other WPI students along their journey. “I serve as a biology ambassador,” he says, “student tour guide, a member on the Arts & Sciences Student Advisory Council, and a mentor for a student involved in the Green Energy REU at WPI.”

After graduation, he plans to continue his work supporting the study the ecosystems of the world, “in the hopes,” he says, “that understanding these interactions will allow the human race to alleviate the current climate crisis.”