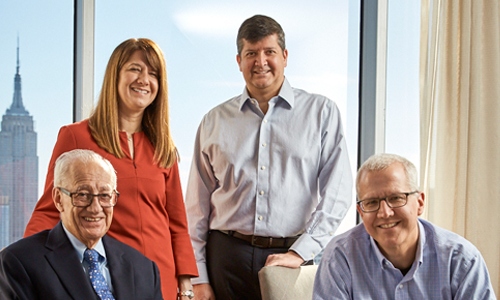 It’s common for children to follow their parents to their alma mater—but it’s unusual to do it on the scale of the Carvajal family.

All three of Jorge Carvajal's children attended WPI, all successful in their careers. In Jorge’s native Colombia, the name Carvajal is synonymous with the family’s printing company, where Jorge is vice president of industrial services. His offspring, however, have taken different tacks—Maria ’88 is vice president for global marketing communications at Colgate-Palmolive; Santiago ’89 is director of consumer electronics research strategy at Bose Corporation; and Hernando ’93 is director of Latin America sales for BMW

“My principle is that they will be much happier doing what they want," says Jorge, "and I think they all made very good choices.”

When Jorge entered WPI in 1958, he was drawn to mechanical engineering—in an effort to learn more about chemical printing processes in order to contribute to his family business. He soon became interested in computers, learning to program an early IBM 1620.

“In physics, we had to find the half-life of a radioactive material, and we took about 800 measurements over a period of time,” he says. “My classmates did it on graph paper, but I was able to show them how to do it on the computer.”

He took that computer interest back to Colombia, introducing processes for printing electronically rather than with slower lead linotype, leading the firm to become the first in the country to print using a scanner.

Growing up around printing presses, Maria inherited Jorge’s love of engineering. Although she was accepted into several engineering schools in the US, “...my dad was adamant that I go to WPI,” she says. Arriving in Worcester, sight unseen, Maria remembers quickly feeling at home, forming tight friendships with the sisters of Phi Sigma Sigma (who are still among her closest friends), and appreciating the practical engineering focus in the chemistry lab.

“The analytical approach to problem solving has been the key for success in my career,” she says. After WPI, she earned an MBA at Babson College and then joined Colgate-Palmolive, where she has been responsible for overhauling its digital strategy.

Santiago followed a year later, having already fallen in love with WPI while visiting his sister. He, too, developed a tight group of friends, including fellow Latin American students from Argentina, Brazil, Peru, and Mexico. Studying electrical engineering, he was heavily influenced by a class with acoustics professor Richard Campbell.

“A good friend of his was the sound guy for the Grateful Dead,” he remembers. When the band came to the Worcester Centrum, Campbell took his class for a tour, showing how sound engineers optimized the sound in the arena of massive concrete walls. “I remember being completely amazed at how much work went into making the arena sound good,” he says.

For his senior project, Santiago created his own small-scale automatic equalizer, which was coming into vogue at the time. After graduation, he joined the family business for a few years, but soon followed in his sister’s footsteps with an MBA at Babson before joining Bose in Framingham, Mass. There he worked closely with Amar Bose during the introduction of the famous Wave Radio; after managing several product lines for Bose, Santiago moved to Research, where he has been instrumental in connecting the output of the Research organization to the Consumer Electronics Division of the company.  During his time at Bose, Santiago has pioneered new products like TVs with built-in home theatre sound, and most recently, a new augmented reality system incorporating Bose sound technology.

When it came time for Hernando to decide on a school, it was a no-brainer. “Being around the family and seeing what it did for my dad, it wasn’t a difficult choice,” he says. Three years younger than his brother, he came to WPI to study fluid mechanics, and conducted a study of the canals at the Venice Project Center. He and a team of students also constructed their own remote-control carbon fiber flying wing, which they demonstrated for NASA.

“We ended up crashing it,” he admits, “but we did fly it for a little bit first.” Hernando has taken that firsthand knowledge of vehicle engineering to BMW, where he is now in charge of sales and marketing for all of Latin America. “I have to talk to the press quite a bit," he says, "so it’s important to understand the technical side and how things come to fruition.”

Although the four Carvajals have taken different paths since their time in Worcester, they share a love of technology and a deep curiosity about the world. “I do like the fact that we all have such different careers,” says Hernando. “Nevertheless, we were all shaped in the same mold. Going to the same school brings it all a bit closer to home.”