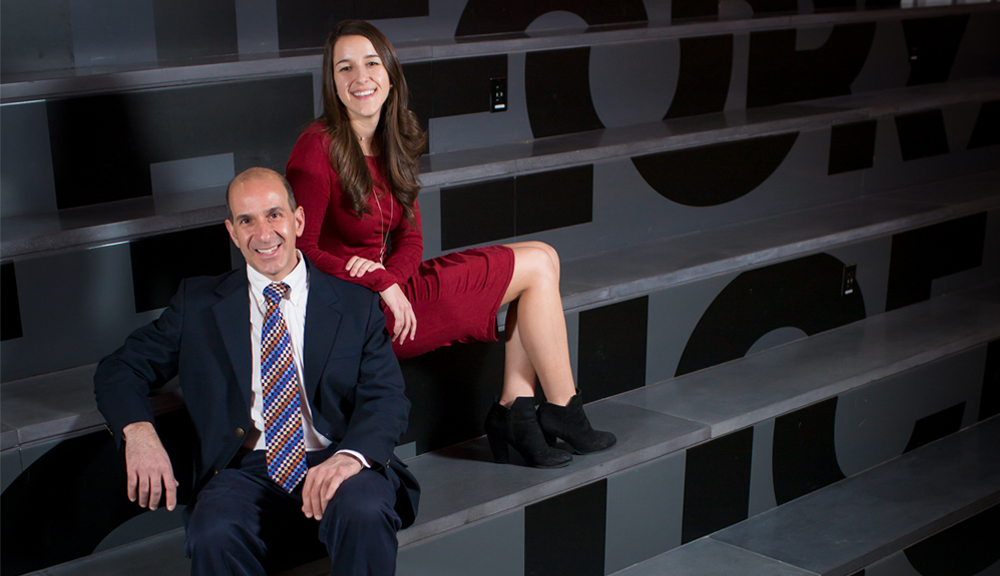 Michael Mazzucco was a first-generation college student and the first among his seven siblings to earn a degree. Money was tight when he was growing up, so he went to a less-costly two-year technical college before transferring to WPI. Once there, he squeezed three years of academics into two, graduating with a BS in civil engineering. If he has any regrets, it’s that his grueling schedule didn’t leave time to play sports or immerse himself in college life.

But then he got a do-over in the form of his daughter, Jena ’17.

“When she went [to WPI], I got more involved,” says Mazzucco, who is a member of the President’s Circle, WPI’s leadership group of annual donors, and frequently attends university events. “That’s been a great experience for me, to sort of make up for the stuff that I didn’t do when I went to school.”

Mazzucco was expected to join his father’s construction business after high school. He was a gifted student, so his father agreed to let him attend the local technical college instead. After earning an associate’s degree, he visited WPI and “fell in love” with the school. Worried about money, he overloaded on classes and spent summers back home in Connecticut, working two jobs, six days a week. After earning his BS, he received a professional engineer license and formed his own civil engineering firm in Danbury, Conn., Michael J. Mazzucco PC.

From the time his two kids were small, he emphasized the importance of education and hard work. But he also encouraged his children to find their own passion. He hired Jena and her older brother, Anthony, to help out at his civil engineering firm, just as Mazzucco and his siblings had worked for their own father’s construction company while they were growing up.

Anthony gravitated toward business while Jena excelled at science, technology, engineering, and math.  But going to school at WPI wasn’t a given for her. It wasn’t even necessarily a goal. She just wanted to go to a college where she could play Division III field hockey and major in biomedical engineering.

Jena ended up applying to several schools, including WPI. While she considered her options, her dad was careful not to influence her choice.

“I swore to myself I would never pressure her in this decision," he says. "The last thing I wanted to do was sway her to go to a school that she didn’t like.”

It wasn’t until Jena attended Accepted Student Day that she knew WPI was where she wanted to be. She got to know the field hockey coach and players. She saw the people she would be interacting with each day. She felt that WPI would be a home away from home. Her decision was confirmed her first day on campus when the entire field hockey team turned out to move her into her dorm.

Jena pledged Phi Sigma Sigma and changed her major to chemical engineering. She played field hockey all four years at WPI. She traveled to New Zealand for her IQP and with her team earned a President’s IQP Award for their project, “Stakeholder Study: Resource Management of Wairarapa Moana.” Upon graduation, she took a job as a materials engineer with Brooks Automation in Chelmsford, Mass.

In short, she has made her father very proud.

“I see how happy he is when he talks about me and WPI, and I know that he never, ever pressured me and I never felt that I had to go to WPI or I had to do this for him,” Jena says. “It was completely my decision. But now that I’ve graduated—now that I’ve gone through it—it’s been an awesome bond between us because we have this thing that we share now.”