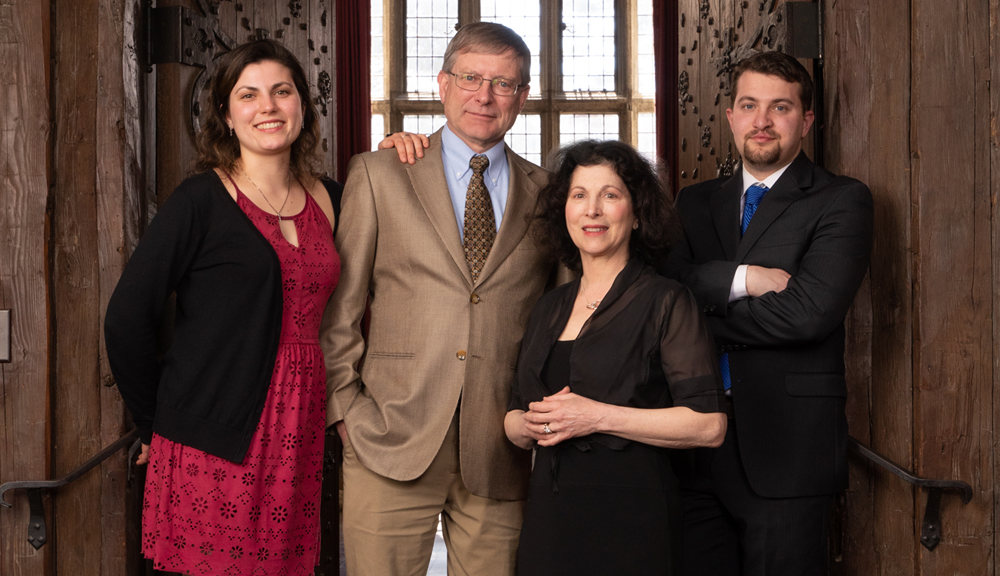 Kenneth Scott ’48, ’54 (MS ME) made an indelible mark on Worcester Polytechnic Institute during his decades-long tenure as a professor of mechanical engineering. He established the Instructional Media Center and the Computer-aided Design Laboratory.  He was instrumental in developing individually paced instruction and was recognized with awards for excellence.  In 1971, Professor Scott was the first faculty member to be named the George I. Alden Professor of Engineering at WPI. But for at least four WPI alumni, Scott’s most consequential contribution was engineering the introduction between his son, Kenneth Scott Jr. ’76, and Jayne (Franciose) Scott ’78, ’80 (MS BE), ’93 (ME BE). The couple married in 1990—their two children, David Scott ’15, ’16 (MS FPE) and Julia Scott ’17, earned their degrees at WPI as well.

The family’s first link to WPI was forged in the early 1940s, when Ken Sr. enrolled as a mechanical engineering student. He stayed until his retirement in 1999, leaving only to serve a two-year stint in Europe during World War II. He passed away in 2008.

Ken Jr. grew up at WPI, exploring its nooks and crannies, playing with analog computer parts, and helping his father in the lab on weekends. It was a given that he would study there. “WPI has always been like home to me,” says Ken, who later earned an MBA from RPI. He was active in the WPI organization Lens and Lights but somehow never crossed paths with Jayne, despite her being a fellow mechanical engineering major who performed in theatre productions.

Jayne arrived at WPI straight from her junior year in high school.  Her plan was to study for a year then transfer elsewhere to pursue music. She ended up staying, earning her undergraduate degree in three years. She was a founding member of WPI’s Women’s Chorale; she played on the fencing team and was active in the student-led theatre organization Masque. She worked for Professor Scott while pursuing her master’s degree in biomedical engineering. 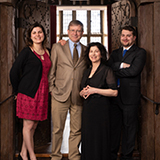 "We all went to WPI and left our own different marks on WPI,” says Julia. “It unites us as a family.”

After stints in New York at Estée Lauder, and then at the Hospital for Special Surgery, she returned to WPI to continue her education and to teach. That’s when Professor Scott encouraged her to look up his son, who was living in Connecticut and working for Electric Boat.

It wasn’t until they were planning their wedding three years later that Ken and Jayne realized they had WPI friends in common. He is philosophical about their delayed meeting. “It’s strange that I didn’t know her on campus, so I kind of believe in fate. It would have been too early to meet then.”

The couple settled in Mystic, Connecticut, to raise a family. Jayne earned a second master’s degree from WPI and was a visiting lecturer at the U.S. Coast Guard Academy. She is now a school teacher and is active on the WPI Alumni Association Board.

The whole family would drive north for alumni events at WPI— David didn’t think seriously about going there until he was applying to colleges. For him, WPI stood out for its diverse engineering programs. As a student, when he went to the basement of Riley Hall, he would imagine his parents at the Goat’s Head Pub. He would look at  the plaque in Higgins Labs etched with his grandfather’s name as  interim head of the Mechanical Engineering Department. (Julia did that too.) But he made WPI his own. He played intramural soccer and served as vice president of fellowship for the service fraternity Alpha Phi Omega. In 2012 he represented WPI in “Worcester Got Talent,” winning the competition as a singer/songwriter/guitarist with two original songs. David still writes and performs music with the goal to inspire others. His IQP with a fire brigade in Australia led him to earn a master’s in fire protection engineering. He is now a fire protection engineer at EPM in Framingham, Mass.

Julia was accepted at 11 colleges, but WPI always stood out to her.  She chose WPI for its environmental engineering program, its music minor (she plays piano and sings), and the opportunity to complete a term abroad. At her baccalaureate ceremony, she performed an original composition and dedicated it to her grandfather. Like her brother, she looked for signs of her parents and grandfather, but she carved out her own niche. She pledged Alpha Xi Delta, was a member of the WPI Dance Team, was an Admissions Associate, and sang and played piano at Catholic Mass most Sundays. Since earning her degree, Julia has worked as an environmental engineer at Haley and Aldrich in New Hampshire and is involved with Engineers Without Borders.

“That’s the thing I’m really proud of—that we all went to WPI and left our own different marks on WPI,” she says. “It unites us as a family.”