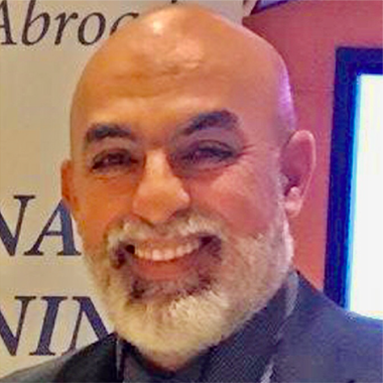 I took an eclectic learning path beginning with an associate degree in Islamic Jurisprudence. Upon moving to Boston, I went on to earn a degree in Journalism from Suffolk University, as well as a Master degree in Political Science with a concentration in International Relations. I finally received a certificate in Civic Leadership as part of a scholarship program, whose objective was promoting representative democracy. I have an extensive background in community organizing and advocacy work. I led efforts to increase political and civic engagement among the Boston Muslim community and have consulted in numerous research endeavors as a voice for the Muslim community. I joined Harvard University’s “Islam in the West” research team . I  was also involved in a number of social science research projects with Cambridge Institute of Health producing research that bolsters advocacy tools for immigrant and minority communities. I taught at several institutions of higher learning such as Providence College, Emmanuel College, Worcester State University, and Dean College. I like to say that I help students see the the major overlap between Grammar, Math, and Logic. My classroom is often described as a circle of knowledge is a stress free learning environment

My achievements span many areas, chief among them was founding and serving as the managing editor for the very first Arabic/ English print newspaper in the Boston area, Al Arab News. I have led efforts to increase political and civic engagement among the local Muslim community starting by the founding of The Muslim American Civic and Cultural Association (MACCA), a volunteer organization that emphasizes the importance of participatory citizenship and volunteerism. I also served on the Board of Directors for one of Massachusetts’ largest cap agencies, whose mission is to fight poverty and eradicate homelessness. I also served on advisory boards of a few advocacy groups on issues of relevance to the larger cap community, such as hunger, poverty, toxic loans, and racism. In 2009, I was named as a Muslim Leader of Tomorrow (MLT), a prestigious title bestowed on young Muslims with a track record of community organizing. My current areas of interest are the Moroccan Jewish Diaspora and bi-cultural stress disorder among Arab American youth.

Over the past eight years, I’ve developed a short term study abroad program to expose interested students to my native Morocco. The service learning aspect of these trips has allowed me to expand my knowledge of my native country and its people. These types of experiences without a doubt make for the most successful and informative learning experiences for students. Most importantly, these trips serve as an effective outlet to deconstruct and dispel some of the most vile misconceptions and stereotypes about Arabs and Muslims. I continues to champion the need for cross cultural learning opportunities and to expand the scope of study abroad programs and adapt them to the constantly changing needs of students.

Curriculum Vitae
"I liken my study of logic to the study of grammar. You only really see the rewards when you later come to observe language in use and you grasp what it is that makes the language of poetry so evocative"
Georg Wilhelm Friedrich Hegel