Participating in a co-op with Mercury Systems allowed Emily, a Mechanical Engineering major, to use her experiences from classes and projects in the workforce, while also making connections and learning more skills she wouldn’t have been able to perfect in the classroom.

Emily worked closely with the mechanical engineering team at Mercury Systems to help design test fixtures for hardware production, support lab technicians, and more. She credits WPI’s emphasis on project-based learning with making it easy and natural for her to jump right into the project team setting.

Because her co-op lasted for over six months, Emily was able to work on more projects and be more fully involved in the company than she would have as a summer intern. She firmly believes that working 40+ hours per week and being given more responsibilities than she would have had as an intern contributed to her co-op being one of her most educational, influential experiences at WPI.

Emily plans to become a mechanical engineer after graduation. Although she doesn’t have a particular company in mind she’d like to work for, she knows one thing for sure—she wants to work somewhere she’ll know she’s making a difference. 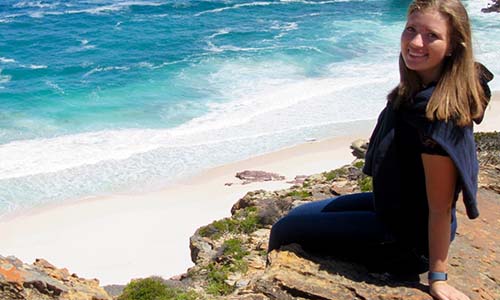 The workday begins as I finish up whatever tasks or projects I had been doing the day before.

My coworkers and I get lunch, either down in the cafeteria or at a local restaurant.

The rest of the day is full of meetings to go over design reviews, as well as continuing work on other projects with different members of the team.