After earning his master’s degree from Tufts University, Joshua Gershlak came to at WPI to continue his research in Glenn Gaudette’s Myocardial Regeneration Lab. In the lab, he’s been able to take several of his research interests, including regenerative medicine, tissue engineering, and decellularization, and apply them to research that’s now taken the world by storm—growing heart tissue on spinach leaves.

Making the association between spinach and an aorta is something Josh never would’ve considered before, and he credits WPI’s entrepreneurial, innovative mindset for giving him the support and confidence to pursue the idea. Although more testing and “hardcore science” needs to be done, Josh is confident that he and the talented professors and students he works with in the lab can take the idea past proof of concept and make it a reality.

The research has been picked up by organizations ranging from National Geographic and Time to Nerdist, but when asked which media attention has been the most impactful to him, Josh doesn’t hesitate with his answer: a tweet from Cori Bargmann, a neurobiologist and president of the Chan Zuckerberg Initiative, saying that their work is her new favorite paper. “She tweeted it with a direct link to the paper, meaning that she actually read it, and not just the media coverage,” he says. “The tweet was also liked by the CEO of the Gates Foundation. Two really awesome institutes that do science, support science, and support really trying to affect people’s lives in a positive way, for them to at least see the paper and enjoy it, that’s pretty awesome.” Josh pauses, then adds with a grin, “George Takei [posting about it] is pretty cool, too.”

Following graduation, Josh plans to stay in academia and run his own lab. It’ll be a long road, but he’s confident that his work, experience, and exposure at WPI will help him achieve his goal. 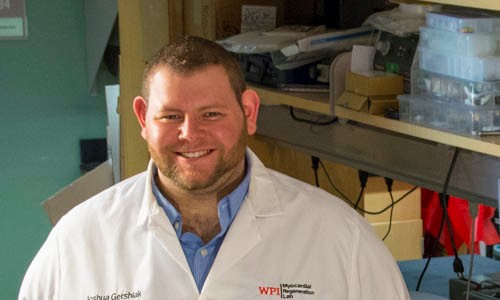 Arrive at Gateway Park, and read up on any new articles that were posted on relevant research

Attend meetings and advise MQPs, as well as undergrads volunteering in the lab

Spend some time at the gym before heading home

It’s worth trying to get into labs here and see what the research is all about, that experience can only help. Look into the department and what individual faculty members do for their research, because that’s what the degree is all about.