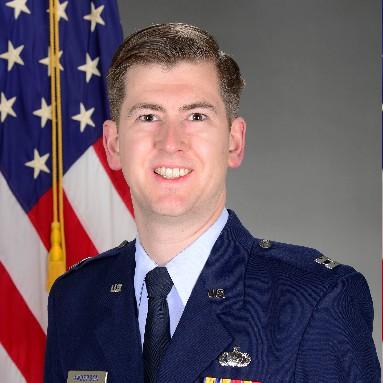 Captain Matthew B. Anderson is currently serving as an Assistant Professor of Aerospace Studies and Operations Flight Commander at Detachment 340 and at the Worcester Polytechnic Institute, in Massachusetts. His responsibilities include overseeing the training of cadets to become officers in the United States Air Force.

Previously, he was the Test Integrated Product Team Lead for the Family of Advanced Beyond Line-of-Sight Terminal Program.  He oversaw all aspects of specialty systems engineering, design, and test of survivable nuclear command and control SATCOM terminal systems and verifies requirements of the Command Post Terminal and the Force Element Terminal for several ground sites and the B-52, E-4, and E‑6 aircraft.

He entered active duty in December 2014 as a graduate of the Air Force Reserve Officer Training Corps program at Norwich University where he graduated with a Bachelor’s of Science in Civil Engineering. For his first assignment, Capt Anderson worked at the Armament Systems Development Division, Global Precision Attack Branch where he was a member of a team that provided several technology demonstrations of future weapon concepts.

He has worked at the 780th Test Squadron where he conducted tests and evaluations of medium caliber ammunition from 20mm to 105mm for the Army and the Air Force. Following that position, he served as the Executive Officer for the 96th Operations Group, 96th Test Wing, Eglin Air Force Base, Florida.