When a trailer for a documentary moves viewers to tears, what might the documentary itself achieve? For a WPI student project team, the answer could be saving Albania’s longest river. 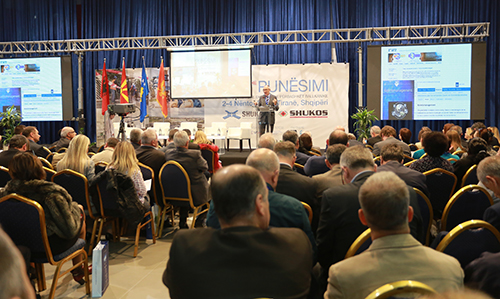 The team actually created the trailer well before they made the documentary itself. In fact, they were tasked with putting the trailer together shortly after they arrived in Albania so their sponsor, Water Supply and Sewerage Association of Albania (SHUKALB), could show it to stakeholders at the Balkans Joint Conference, an annual event drawing more than 450 participants from the Balkans water sector.

Philip Giantris ’65, executive director of SHUKALB, says that both he and the conference attendees were deeply moved by the trailer and impressed that the students had developed it in such a short amount of time. 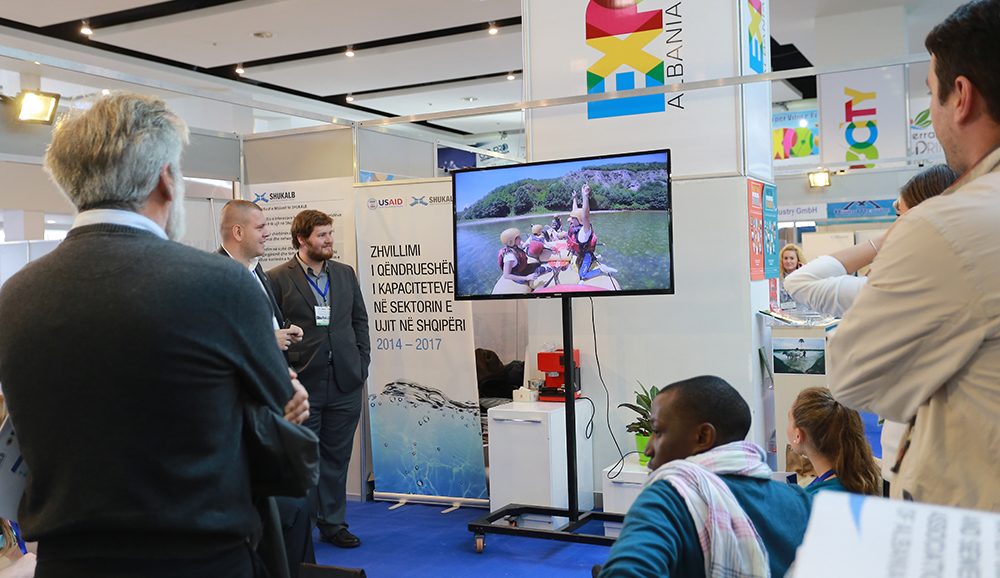 A viewing of the documentary trailer at the conference

“Within eight days of being in Albania, the students were able to produce a one-and-a-half-minute trailer that knocked people out of their seats,” says Giantris. “When someone comes up to you and tells you, in Albanian, that he sat on the edge of his seat, then it had an impact.”

Fortunately, the students had raw material to work with for the trailer and documentary, as their project built upon another project completed by a student team in 2015. The previous team outlined a filming plan to capture footage of the river and interviews with people living along it, which was later gathered by members of Albania’s Young Water Professionals (YWP) group.

The 2016 team was able to travel with YWP members for the last round of filming, this time on the Macedonian portion of the Drin. The meandering river also flows through Kosovo, Montenegro, and Greece, but its longest section runs through Albania, and it serves as the country’s largest source of energy through hydroelectric damming. However, both the dams and the river’s ecosystem are being increasingly threatened by rising pollution levels resulting from recent rapid industrialization in Albania.

The students were able to produce a one-and-a-half-minute trailer that knocked people out of their seats. When someone comes up to you and tells you, in Albanian, that he sat on the edge of his seat, then it had an impact.

As Giantris notes, while several organizations are making efforts to preserve the Drin, there exists a need for greater awareness of its potential plight among both the public and young professionals working in the water sector, and he hopes the documentary can help fill this gap.

“We’re not trying to solve the problem of the Drin alone,” says Giantris “What we’re trying to do is get our young professionals to be part of the process. They need to realize that they are part of this game. They are stakeholders, and Albania is a stakeholder, and we’re going to get up and make a statement about it. With that, we’ll be able to move not just our association but everybody who is along the Drin.”

As part of their preparatory work, the students had studied best practices in documentary filmmaking and connected with people who had produced similar films. After they'd arrived and made their trailer, they began the detailed process of creating the documentary itself by organizing footage, developing a thematic outline, and formulating a well-organized storyline including narration and music. 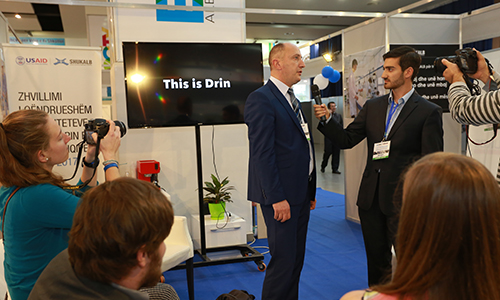 WPI student Daniel Corwin conducting an interview at the conference

Ultimately the team decided that the documentary would take viewers along the river geographically while progressing through four themes: admiration for the beauty and resources of the Drin; negative changes resulting from the pollution; hope that people will feel empowered to take action; and connectedness of people across international borders.

Finally, the students created a distribution plan for the film, which included appearing in person to show their trailer on Albania’s most-watched television channel and reaching out to key stakeholders on social media. The full documentary, Drin: A River for All, can be viewed on YouTube; SHULKAB and YWP members are currently circulating it on Facebook and may submit it to an upcoming film festival.

Vierling and Brooks believe that, with continued distribution, the film could have a significant impact.

"I think our film is really going to help publicize the fact that something needs to be done about the river," says Vierling. "Our sponsors are very passionate about it, and they will definitely continue to distribute our film and make more people aware of the problems—and once more people are aware, more action will be taken, and this action will lead to a cleaner river."

I think our film is really going to help publicize the fact that something needs to be done about the river. Our sponsors are very passionate about it.

Brooks adds, “Part of our preparation work was looking into different efforts that have been made to help the Drin River and other rivers in the Balkan region, so we’re hoping that our documentary can be a puzzle piece behind all those efforts and help make the impact just that much stronger.”

For his part, Giantris says he definitely hopes to continue working on the Drin river project as well as other initiatives with WPI’s ever-impressive students.

Every year the students come with different skill sets, and they’re taking on something that has virtually nothing to do with their academics but has everything to do with problem solving, research, and coming up with a plan.

“Every year the students come with different skill sets, and they’re taking on something that has virtually nothing to do with their academics but has everything do with problem solving, research, and coming up with a plan,” says Giantris. “I’m just impressed that they are so committed, but I guess I expect that of WPI and its students—that they don’t ever feel like they can’t do it.”